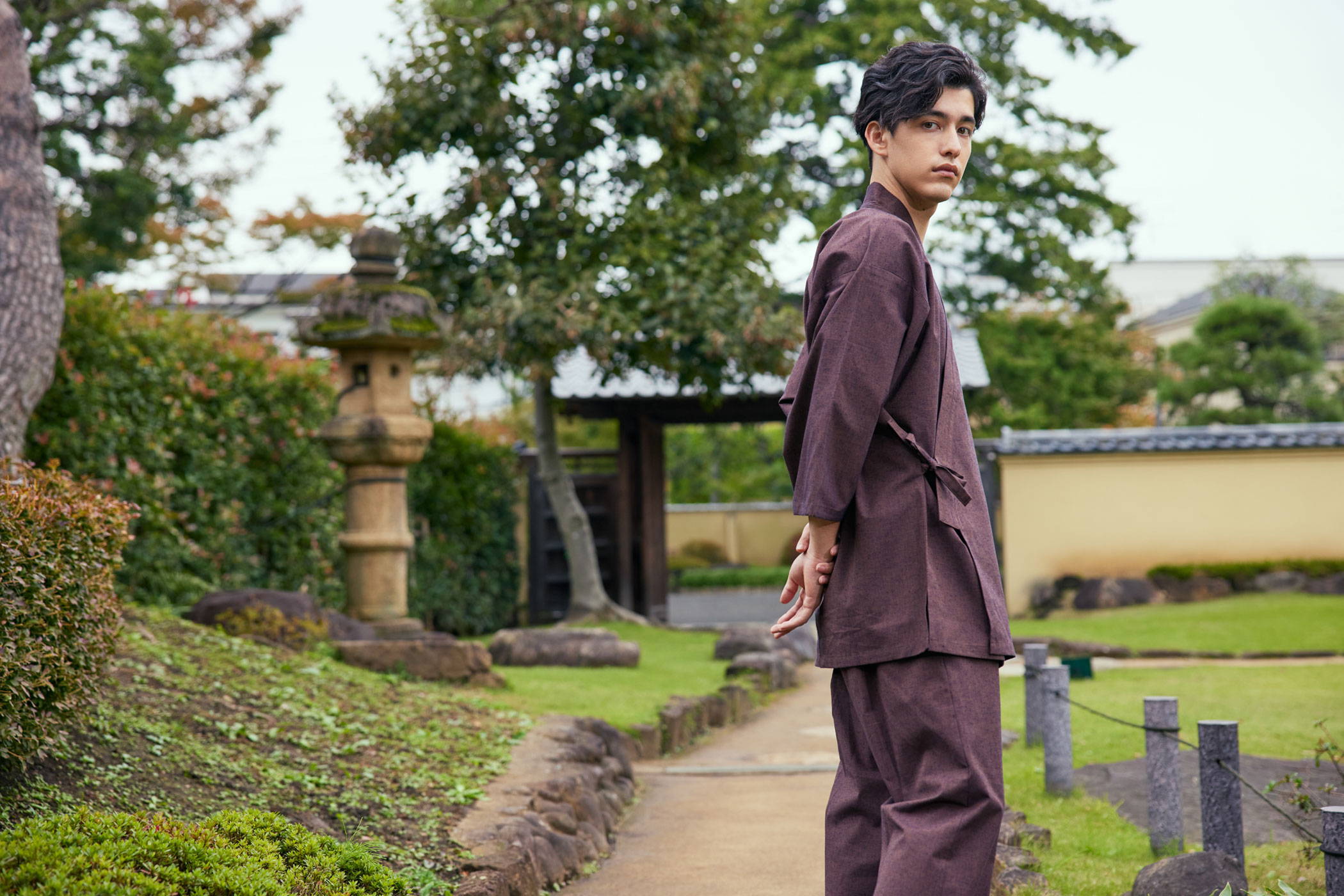 Of all Japanese traditional clothing, samue are the most comfortable, deliberately created with freedom of movement in mind. They are also easy-to-wear and free of styling rules, so unlike kimono there’s nothing difficult to learn. That explains why samue are so widely used today, whether as work-wear, leisure-wear, casual-wear, or even pyjamas. So, what are samue exactly? Here is everything you need to know! 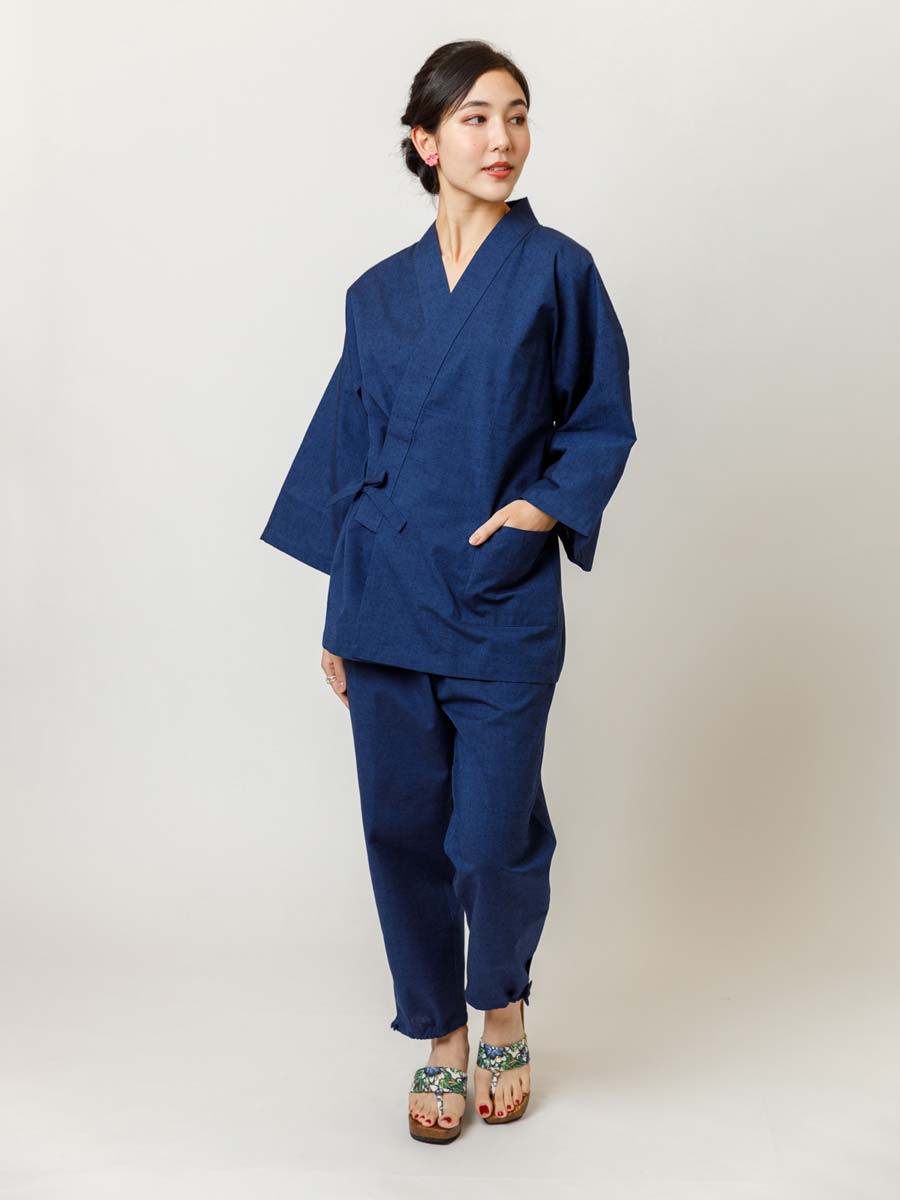 Japanese samue are comfortable jacket and pant suits that originated with Zen monks, but today are worn in the home, in workshops, in temples, hotels and stores by women and men all over Japan. The word samue (作務衣) in Japanese means work clothes, but these days they’re just as likely to be leisurewear. You may also hear the word samugi, which means the same thing. 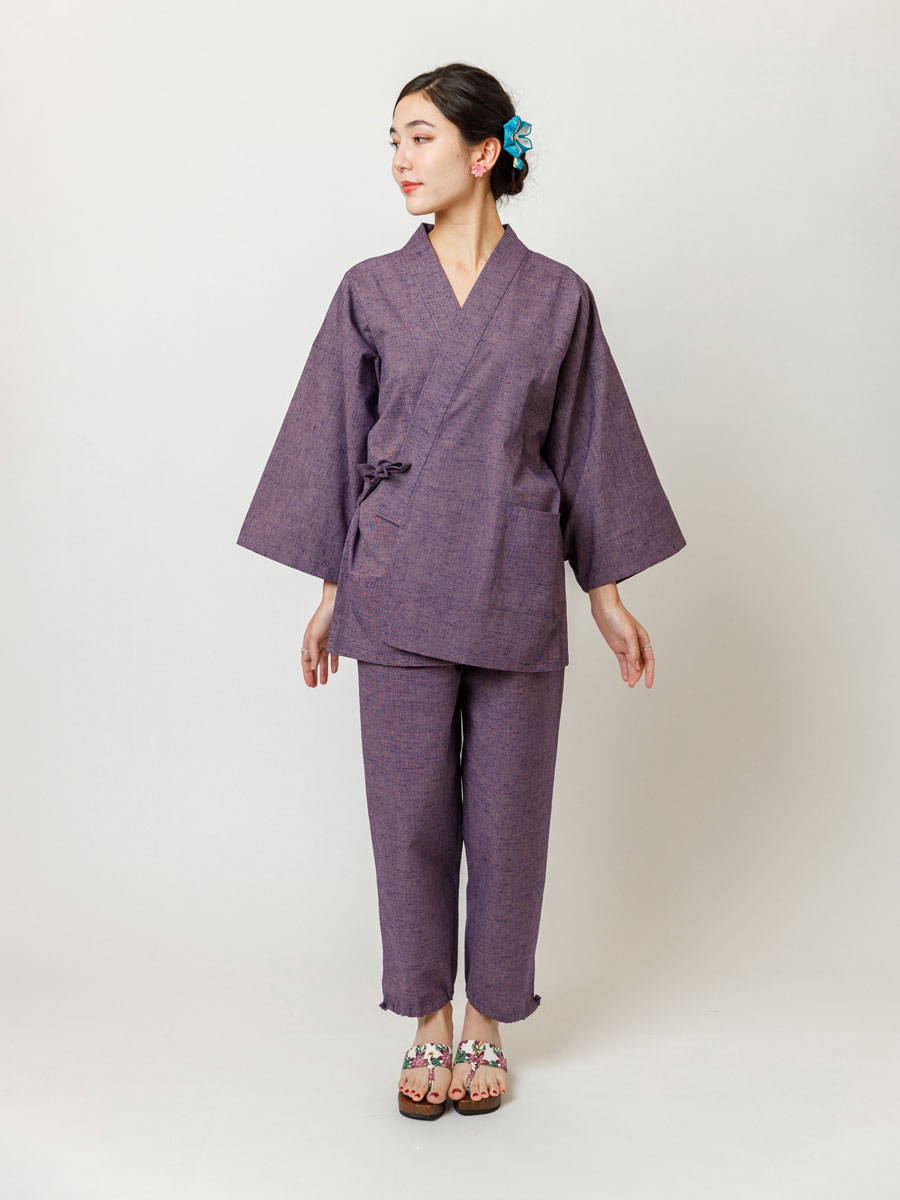 Samue are comfortable and multifunctional two piece garments consisting of a jacket and pants. The jacket is about thigh-length, crossing over the chest left over right, much like a kimono. Unlike kimono, however, samue do not require the use of obi belts. They are secured at the waist with a simple tie (no difficult obi belt knots to learn!). Samue pants are either calf- or ankle-length and usually have an elastic or drawstring waistband

As samue were originally “work clothes,” they are made from comfortable, breathable fabrics like cotton and linen. They are solid in color with a simple woven or embroidered pattern.

Samue can be any color you can imagine! One popular colour is Japan Blue: the iconic natural indigo dye. When worn at work, samue tend to be in this navy hue, or other dark colors such as brown or black.

3. Where Do Samue Come From? 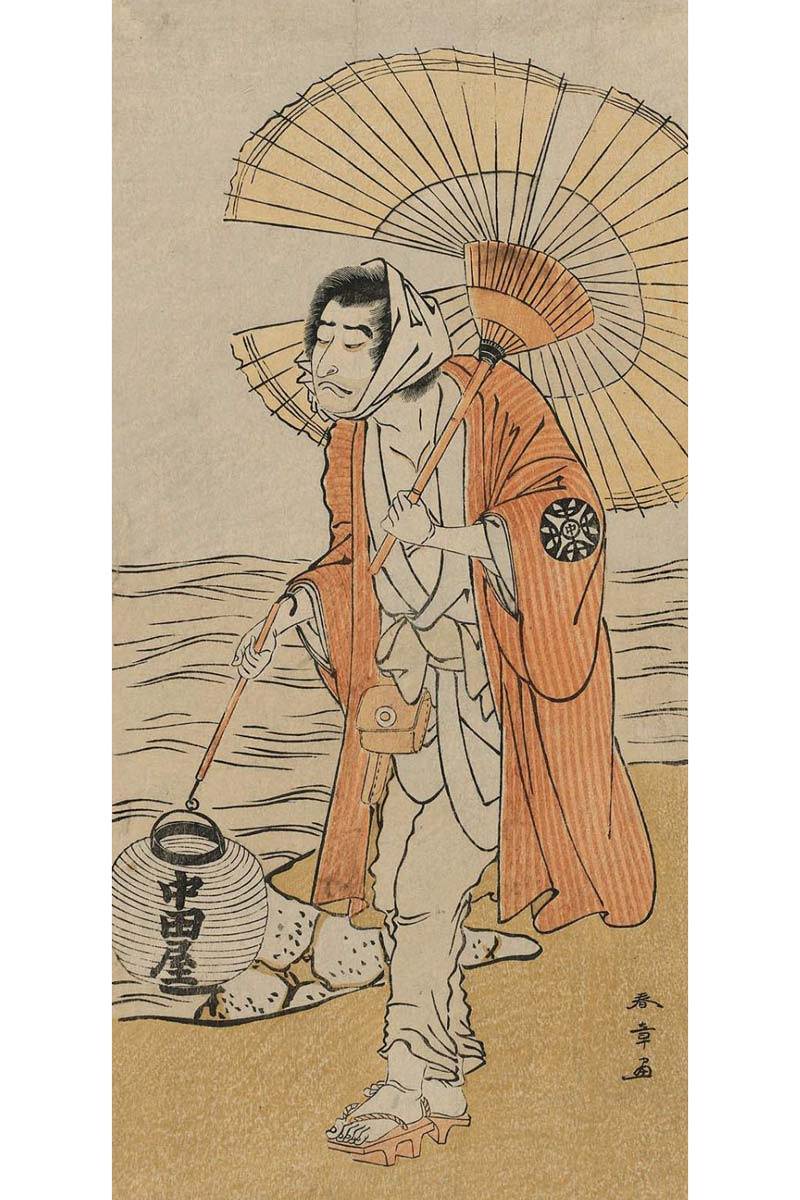 The samue is effortlessly functional and this is reflected in its simple design that reduces the risk of occupational hazards – no long sleeves to get in the way, with drawstrings to secure everything in place. In its early days samue was just the top part, but longer than today, resembling a knee-length tunic. The pants entered the picture a bit later on.

4. Where are Samue Made? 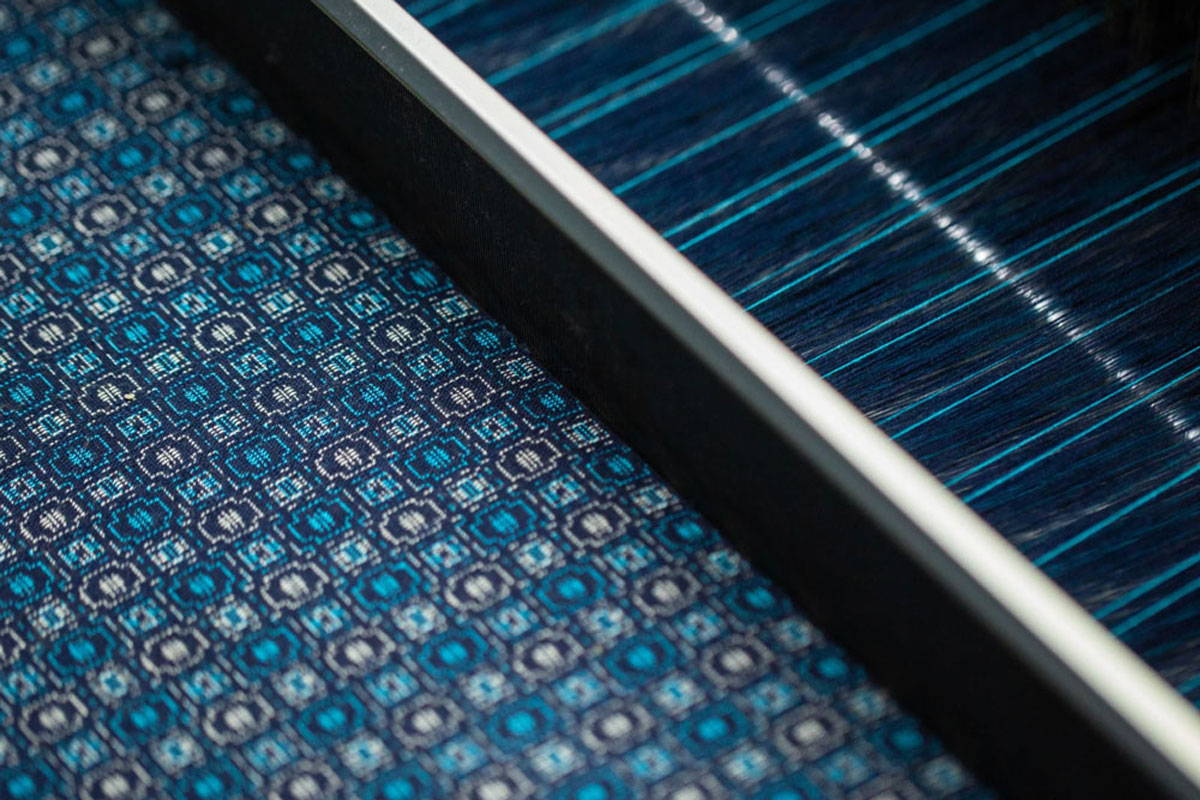 Samue are manufactured in regions with a rich tradition of cotton weaving, such as Kurume, an inland city on Japan’s Kyushu Island that is also famous for hanten. Hanten are traditional cotton padded jackets that can be worn by men or women. Another center for samue making is Osaka, Japan’s third largest city and historic textile center. 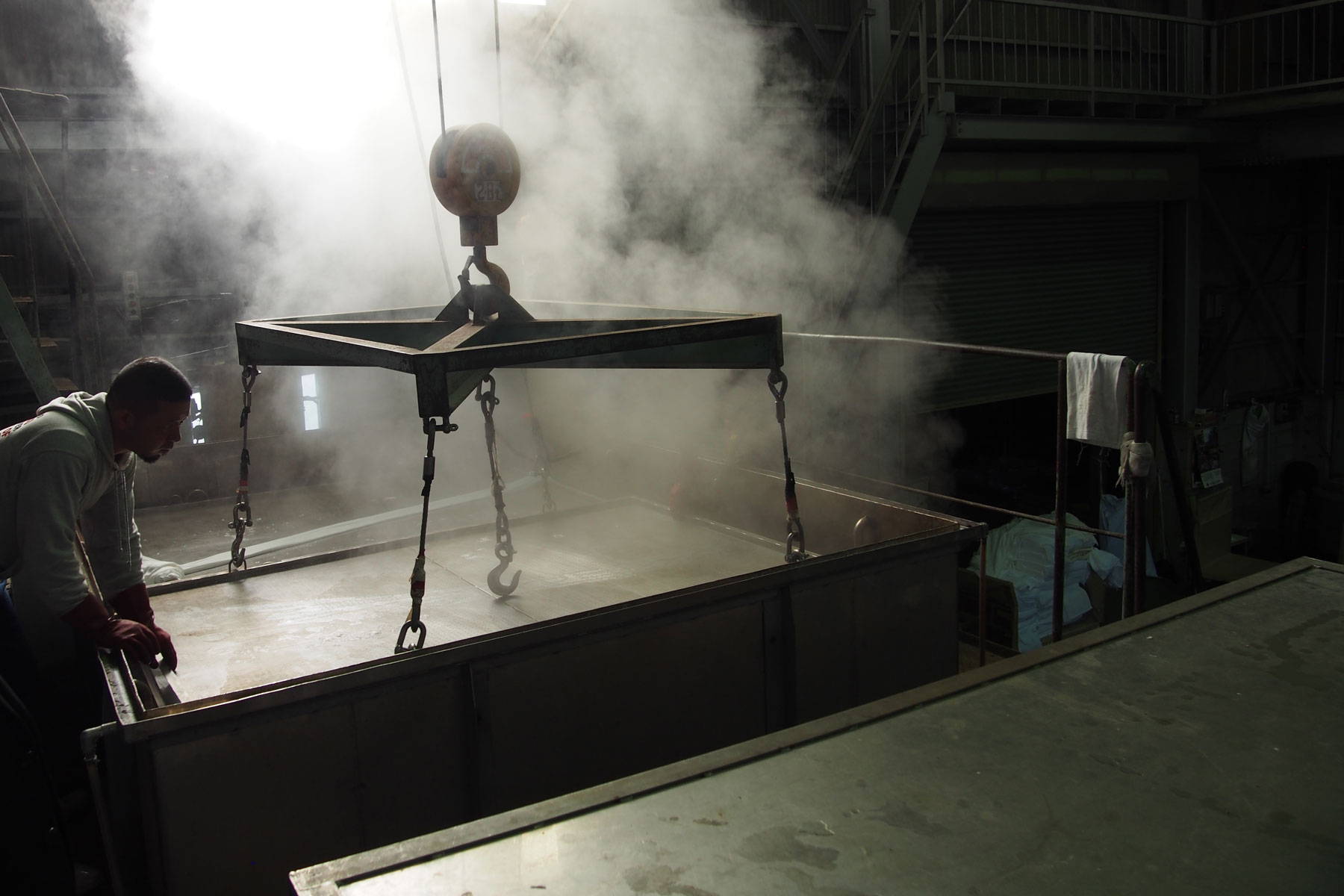 Samue are made from high-quality fabrics that reflect the centuries-long history of Japanese textile. Take for example, wazarashi cotton, woven in Osaka on a shuttle loom, then bleached using natural methods. The resulting fabric has outstanding absorbency and heat retention qualities, and it becomes softer with each wash. A different type of cotton used to make samue, tsumugi cotton, comes from Kurume and is distinguished by an intricate weaving technique that requires the use of multiple threads to create delicate patterns. Kurume cotton is suitable for daily wear and the texture softens with extended wear. 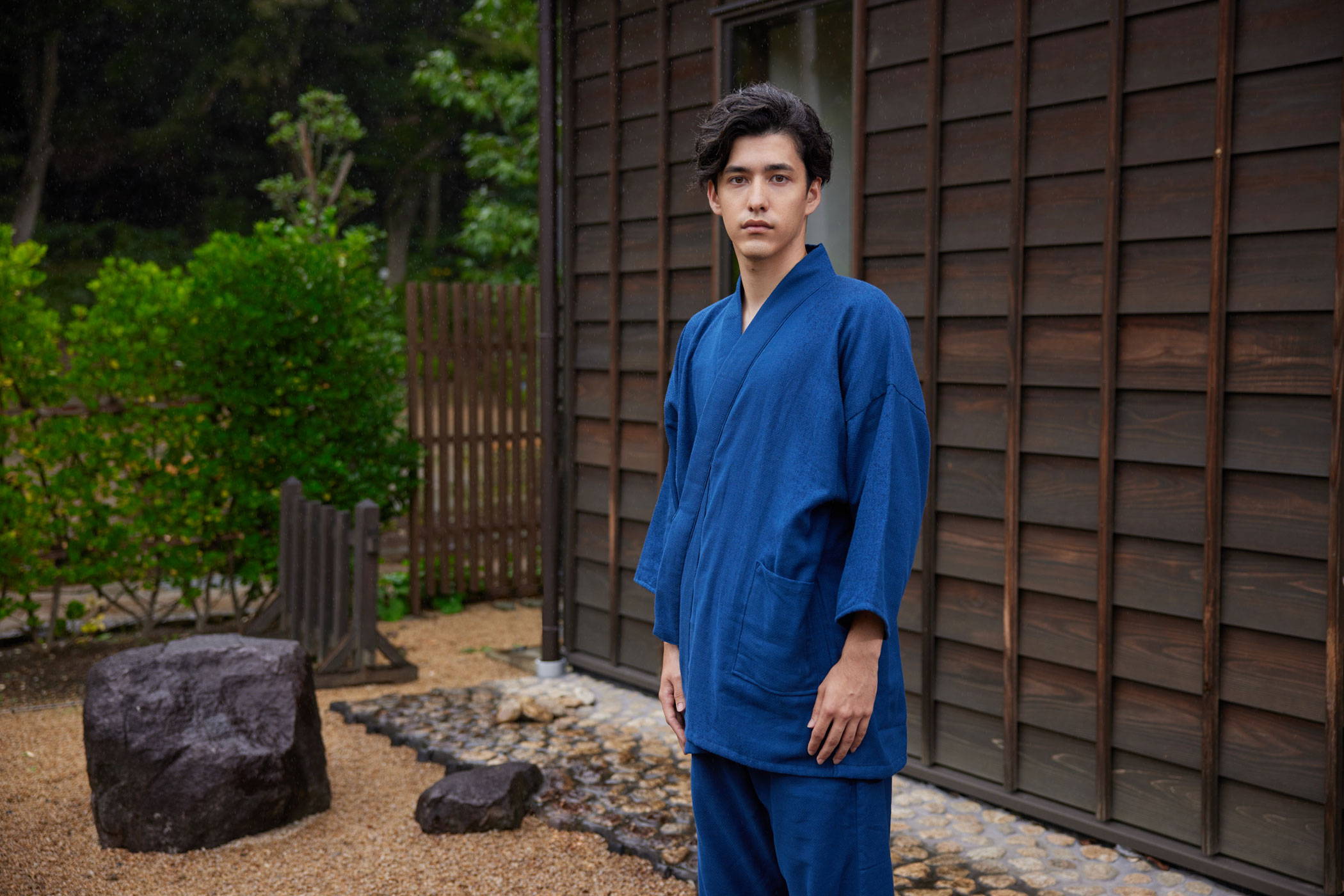 As samue were originally designed as Japanese traditional work clothing, they have been adopted for practical use in many fields, especially by craftspeople and artists. It’s not uncommon to see Japanese people wearing samue in studios, workshops, or even offices.

Of course, Zen Buddhist monks still wear samue. If you stay at a temple and do zazen, you'll find that samue is preferred for zazen mediation practice. Other practices having deep connections to Zen Buddhism have adopted samue too, so it's often worn during tea ceremonies, or by calligraphers, and traditional musicians like shakuhachi players. In a similar vein, samue are a great choice for activities like yoga.

If you stay in a traditional Japanese hotel, you may well be offered a samue instead of, or in addition to, a yukata robe (find out more in Japanese Robes). They’re smart enough to wear around the hotel, and cozy enough to wear in your room as pajamas. For this reason, many people wear samue around their own homes, whether entertaining guests or lying in bed. The bottom line is, anyone who wants can and should wear samue today. 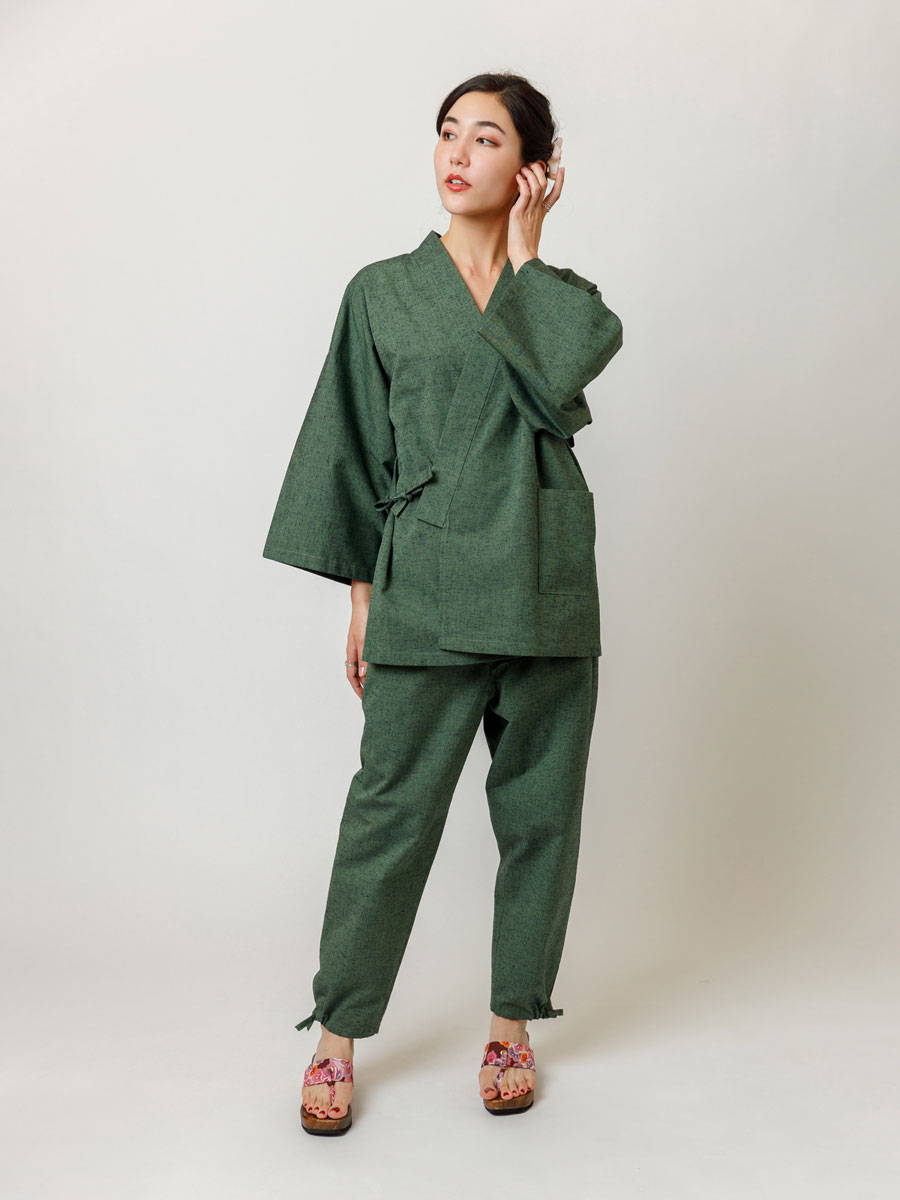 Samue are the easiest thing in the world to put on! They’re loose-fitting so just slip on the pants, and tie them at the waist, then tie the jacket closed with a knot on the side. The only thing to remember when tying the jacket, as with all Japanese traditional clothes, is to bring the left side over the right, so you will tie the know on the right. The sleeves and pant legs sometimes have a drawstring to adjust tightness. More often than samue will have pockets in the pants or jacket or both.

Some people wear a samue undergarment, usually white and mirroring the shape of the samue, slightly peeking out around the neck. There are undergarments that have a dyed collar to match the samue so that they are mostly invisible under it, but the easiest thing to use is a simple T-shirt, with V-neck or not depending on what suits you! In summer, a sweat-absorbent light undergarment is a good idea to keep your samue clean, and in winter a thicker undergarment will help keep you warm. 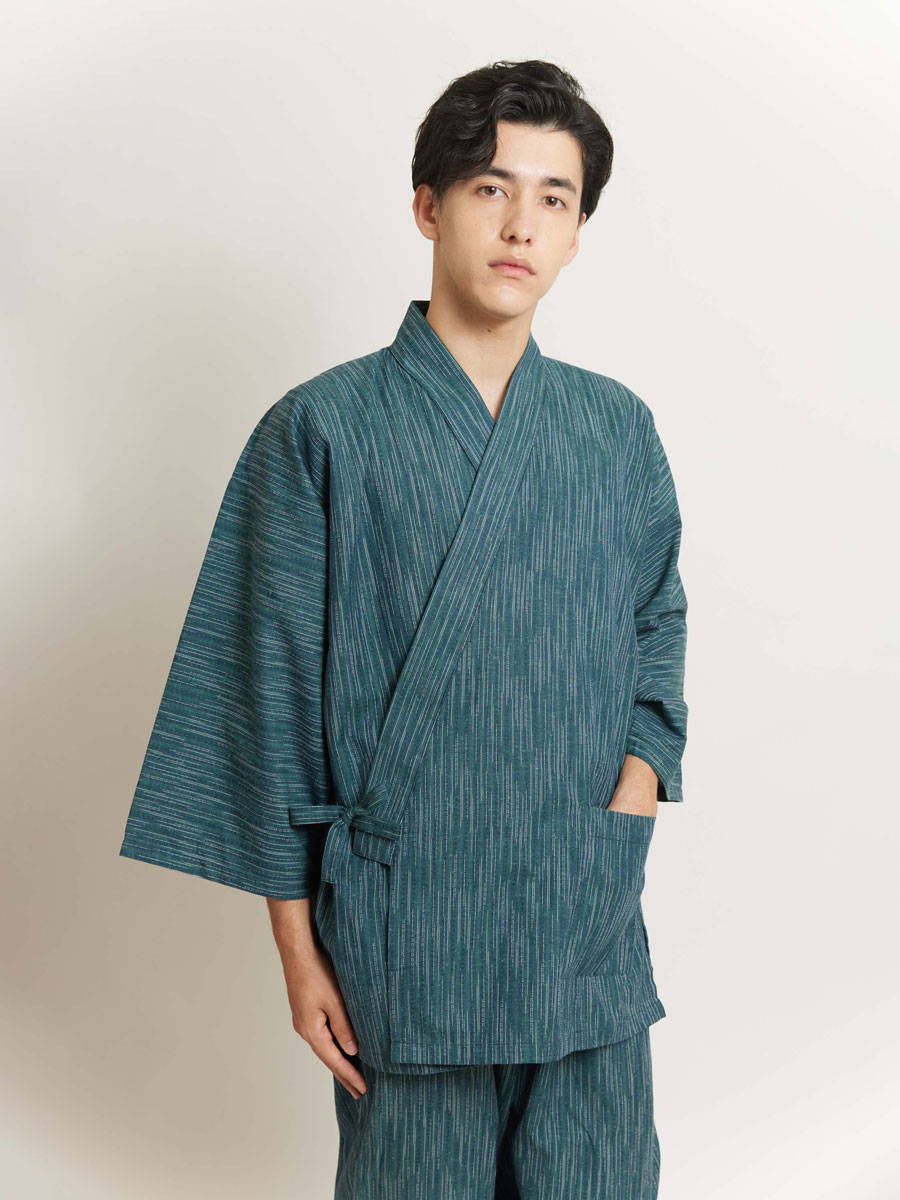 Samue are easy to wear because of the durable wrinkle-resistant fabric, which offers exceptional breathability. Therefore, you may wear a samue in a variety of circumstances. For example, if you work from home, you may find comfort wearing your samue as the kimono-like jacket is a stylish spin on business casual attire.

9. Should I Wear Samue Indoors or Outdoors? 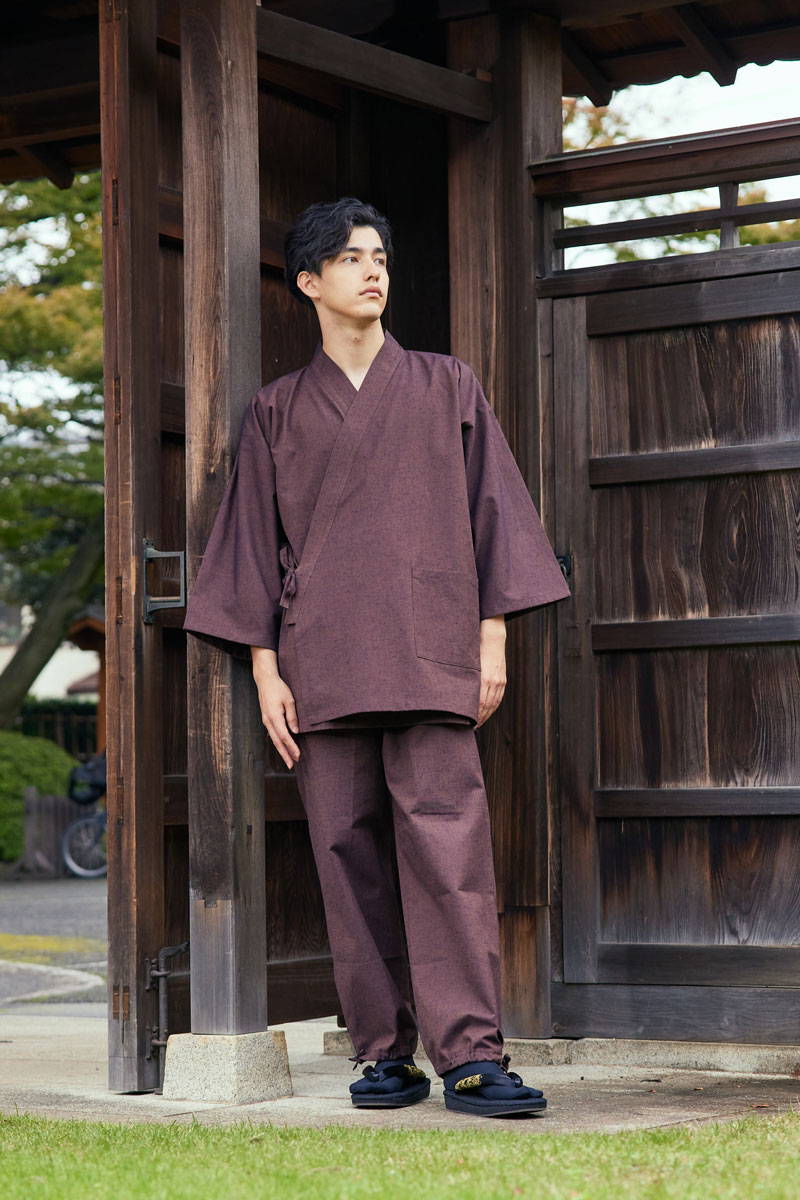 As samue were garments designed for Buddhist monks to wear while doing chores in and around the temple, samue may be worn both indoors and outdoors!

For this reason, many people wear samue around the homes as loungewear and for performing light exercises and engaging in household chores. Samue are also suitable for going for light strolls and running errands.

10. Are Samue Loungewear, or Pajamas, or Both? 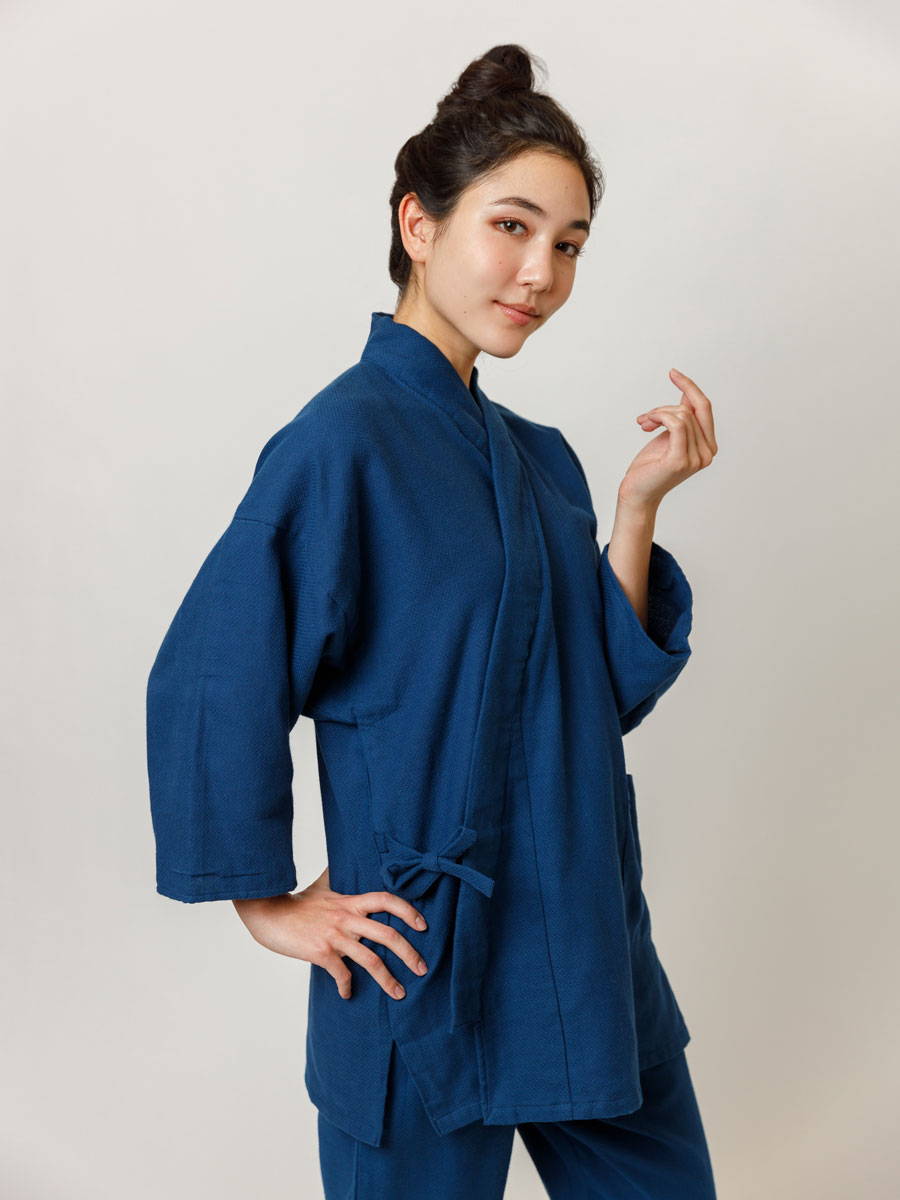 Samue can be anything you want them to be! With this said, some designs are better suited for loungewear or sleepwear. For example, the Cotton Gauze Samue Pajamas in the Japan Objects Store (for men or women) are made from hand-woven double-gauze wazarashi cotton that provides cool comfort in summer and heat retention in winter. The cropped length of the trousers and jacket sleeves are just perfect for snuggling up in bed on or the sofa!

On the other hand, our men’s and women’s Loungewear Samue are made from durable textured Kurume cotton and have full-length legs and sleeves.

11. Can I Wear a Samue Instead of a Yukata at a Ryokan? 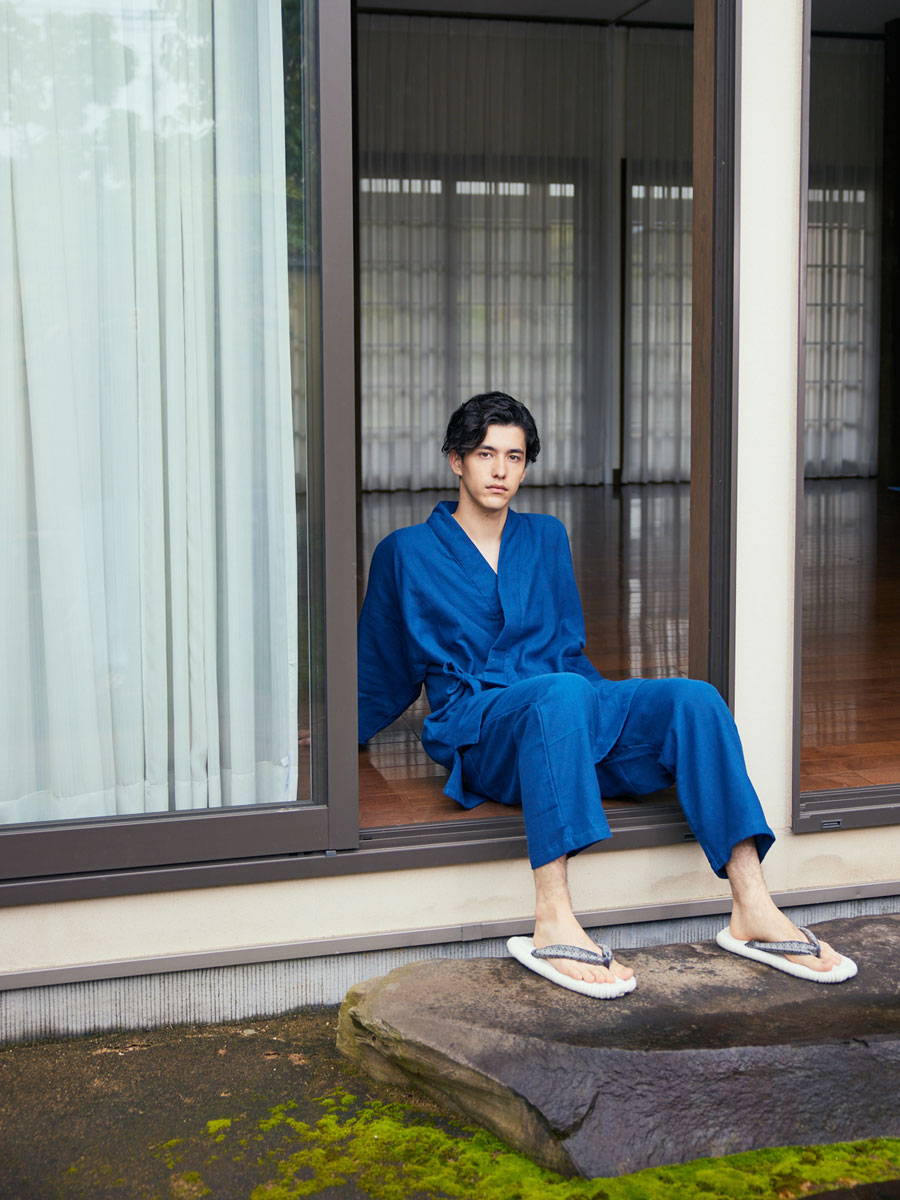 If you’ve been to a traditional Japanese hotel, or ryokan, you’ll know that you’ll often be provided with a yukata, or a kind of robe to wear around the propery. In any such case a samue is a suitable substitute. In fact, you very well may be offered the option of choosing between a yukata and samue. Samue are smart enough to wear around the inn, and cozy enough to wear in your room as pajamas. Plus, the extra pockets are ideal for storing your room keys, phone, and cash!

12. Do Samue Come in Different Colors, Patterns, and Materials? 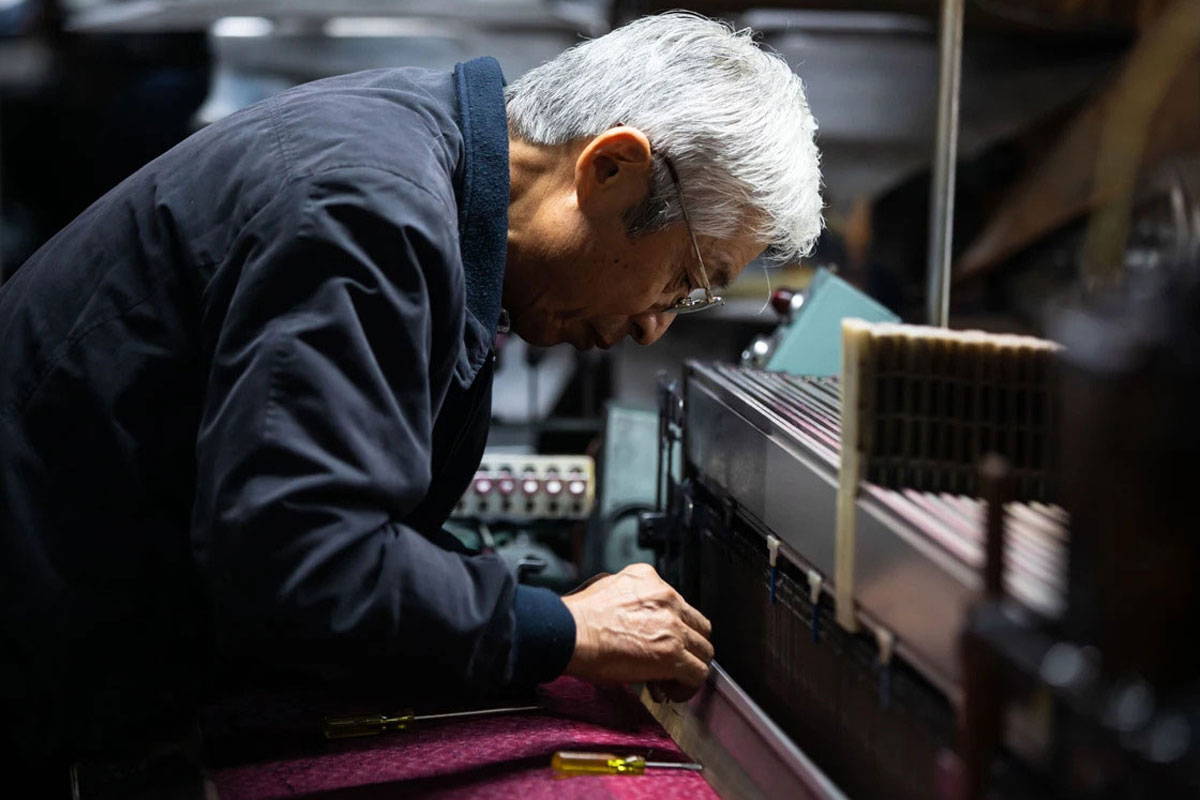 Samue are available in a wide range of colors, from white through to deep muted earth tones like brown, green, and black. Japan Blue, a deep blue color from the indigo plant, is a striking hue that is ideal when choosing a samue for work purposes. Samue may be solid in color or they may have a subtle pattern dyed into the fabric or woven into the fabric.

13. What are the Differences Between Men’s and Women’s Samue? 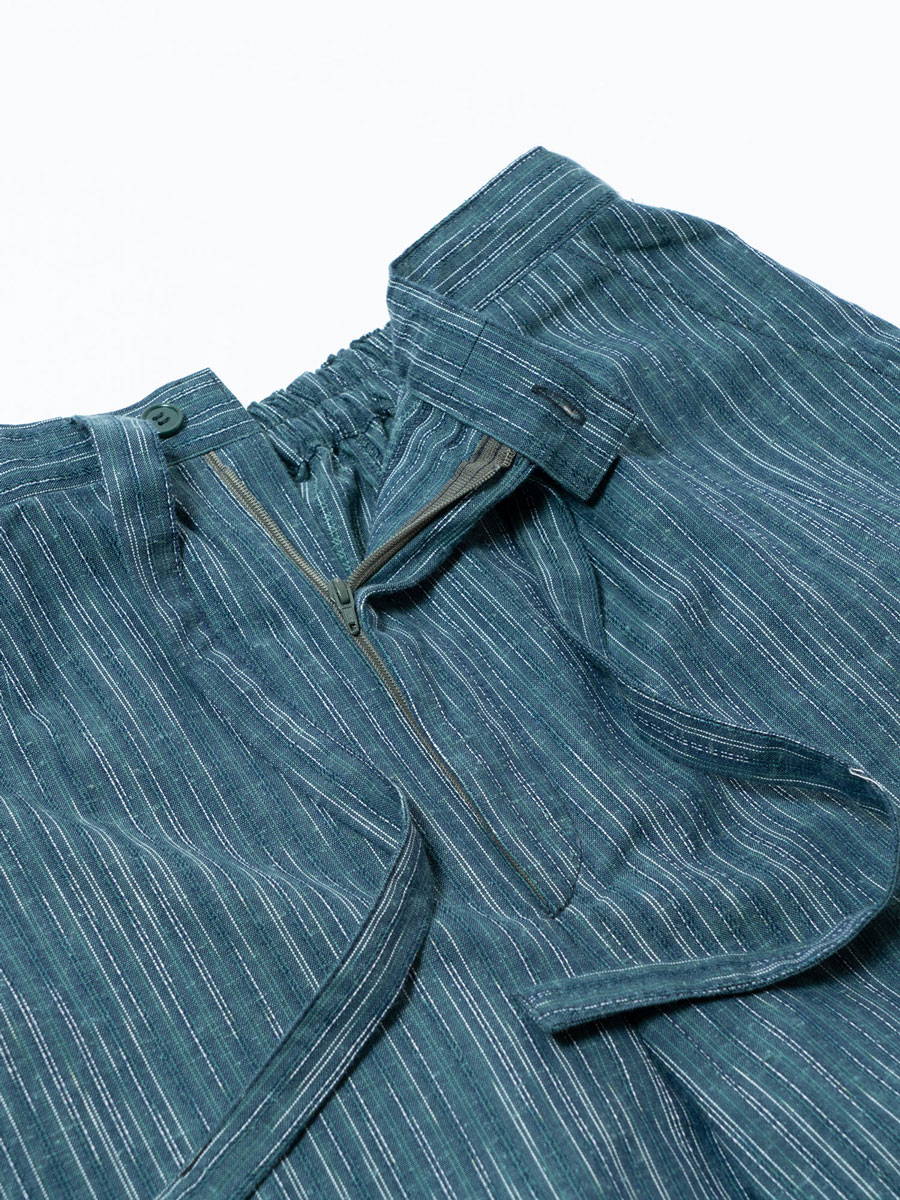 Although samue were first worn by Buddhist monks, they were swiftly adopted by nuns too, before becoming a hit with the wider population. Generally speaking therefore, they are a unisex garment. However, you may find that manufacturers incorporate slight differences in design such as colors and pattern availability, or the presence of a zip fly, in order to appeal to a specific demographic.

14. What to Look For When Buying Samue? 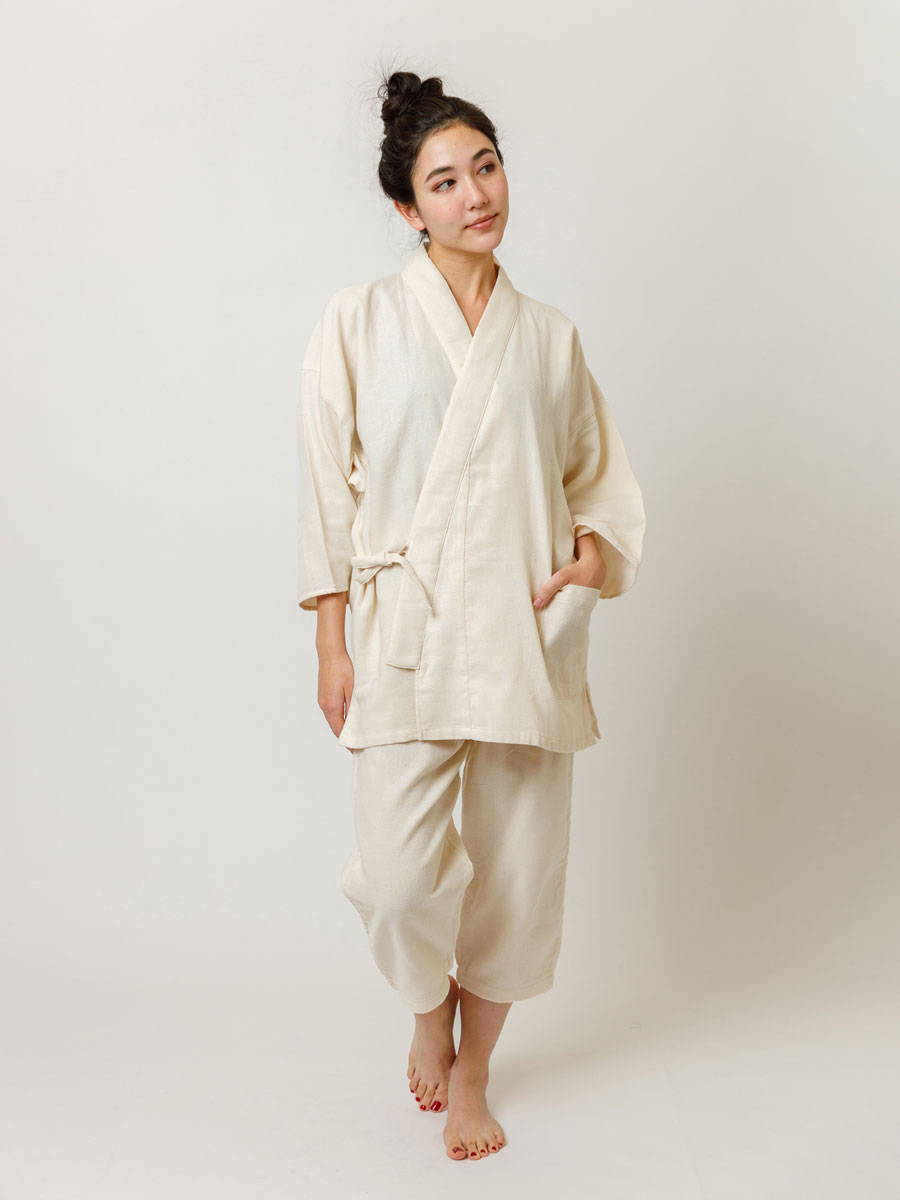 With a garment this free and comfortable it's hard to go wrong. Samue are sold as a set, so bear in mind that it's hard to buy the top and bottom separately.

Samue come in a variety of sizes, but just like pyjamas, you need to make sure it's a loose fit. Another thing to look out for is whether it's dyed with chemical dyes, or natural dyes like Japanese indigo. The natural ones are more labour-intensive and hence more expensive, and they need to be washed and stored carefully to preserve as much of the colour as possible.

For the best quality samue, you obviously want to look for Made in Japan clothes!

Other than that, it's up to you to decide which colour and fabric you'd like, whether you'd go for a unisex work outfit, or a more casual colored style. But above all, choose comfort. 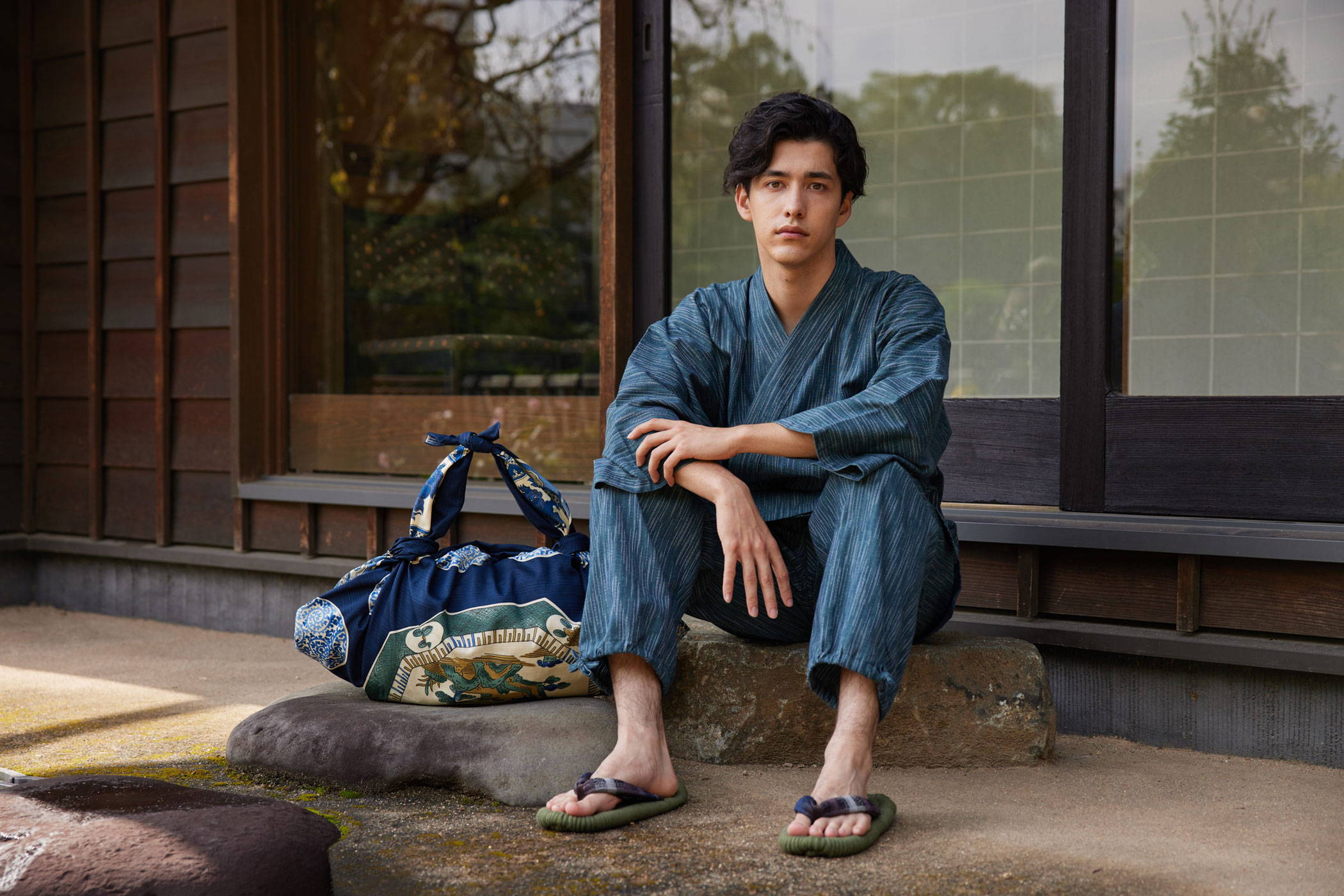 We’ve got you covered here! In Japan Objects Store you will find samue ideal for work- or leisure-wear (for men and women), as well as softer, loose-fitting samue that double as loungewear or pajamas (for men and women). Let us know if you can’t find what you’re looking for!

16. Do Samue Come in Different Sizes? 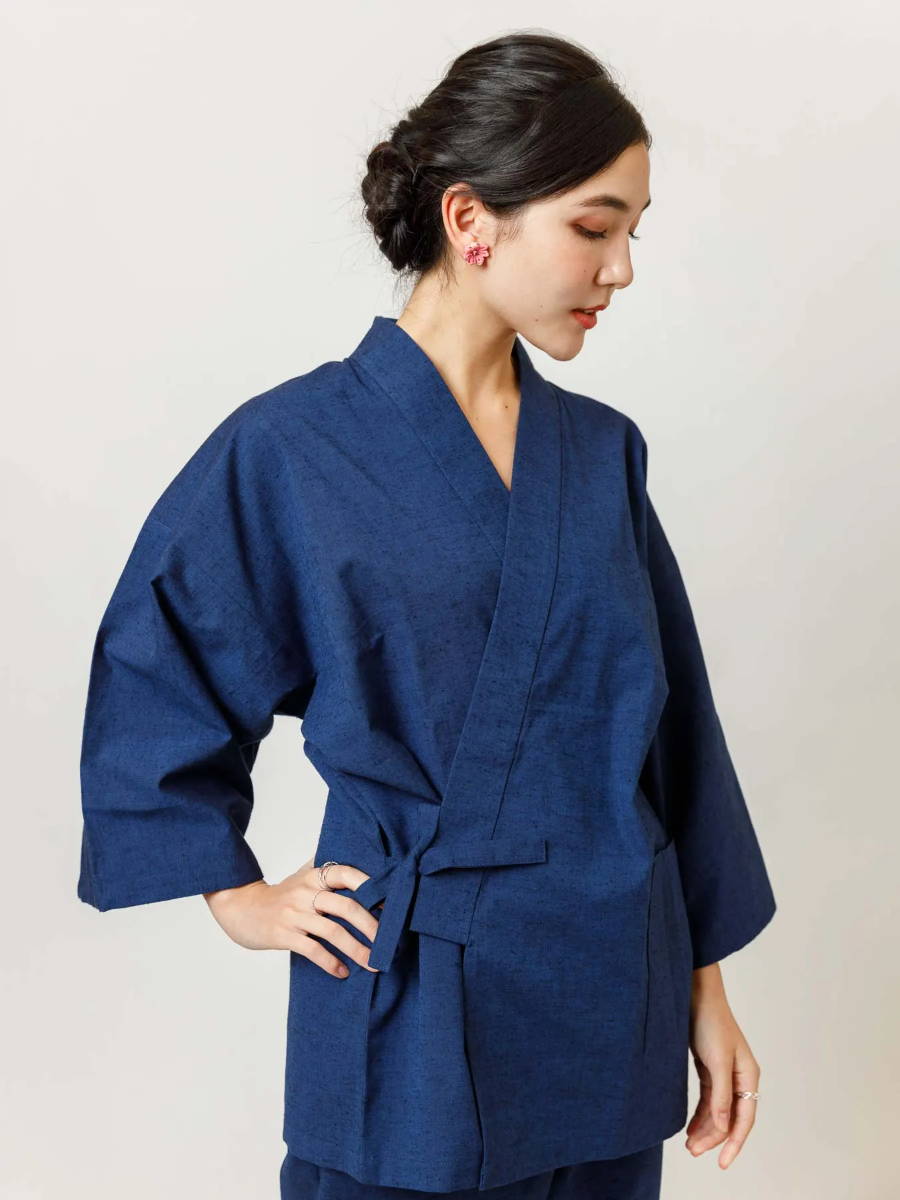 Our samue come in the following sizes S, M, L, XL and XXL and have adjustable waist and leg ties to ensure the right fit. Please refer to our size chart at the bottom of every samue page for additional information. 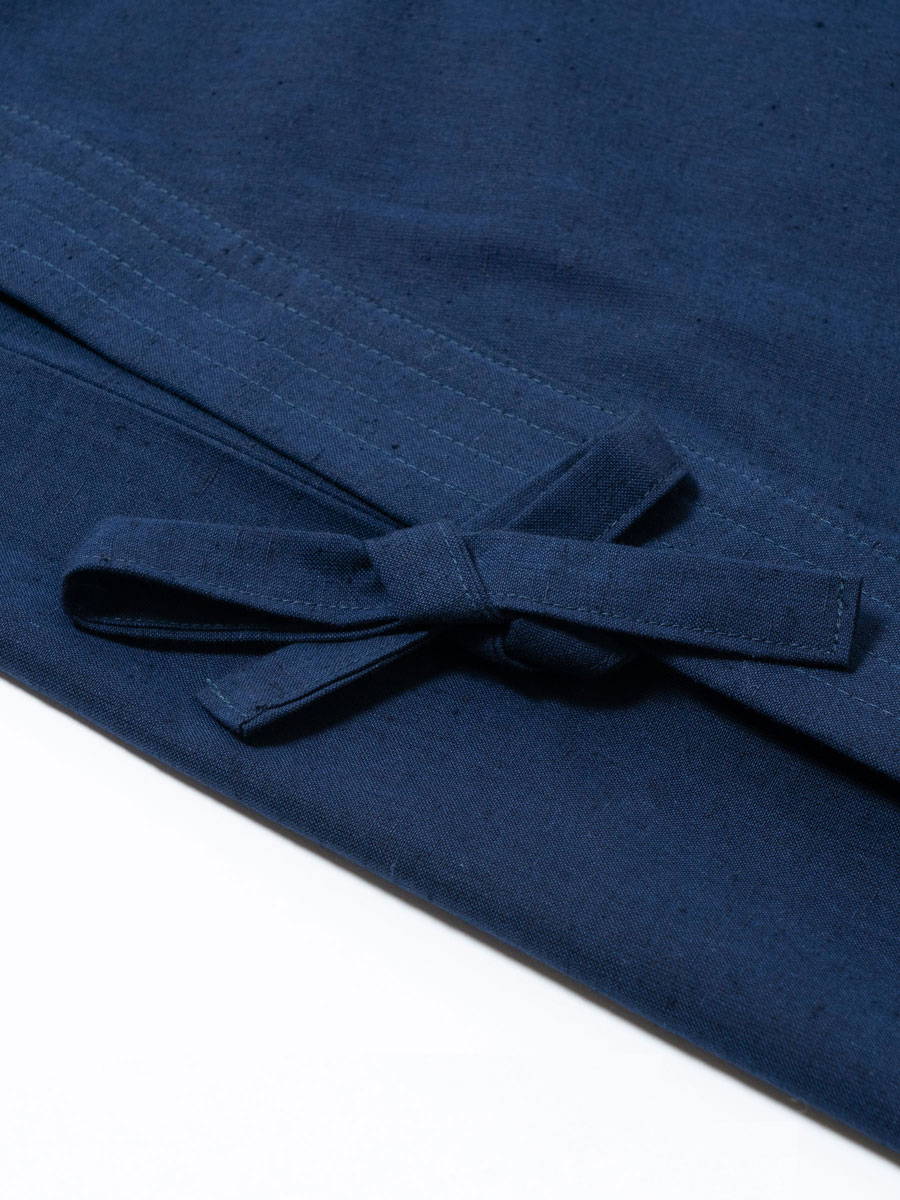 Samue are made from natural fabrics such as linen and cotton. Machine-wash your garment at low temperatures with similar colors and avoid using fabric softeners and bleach. Do not tumble dry.

18. What Accessories Do I Need for a Men’s Samue? 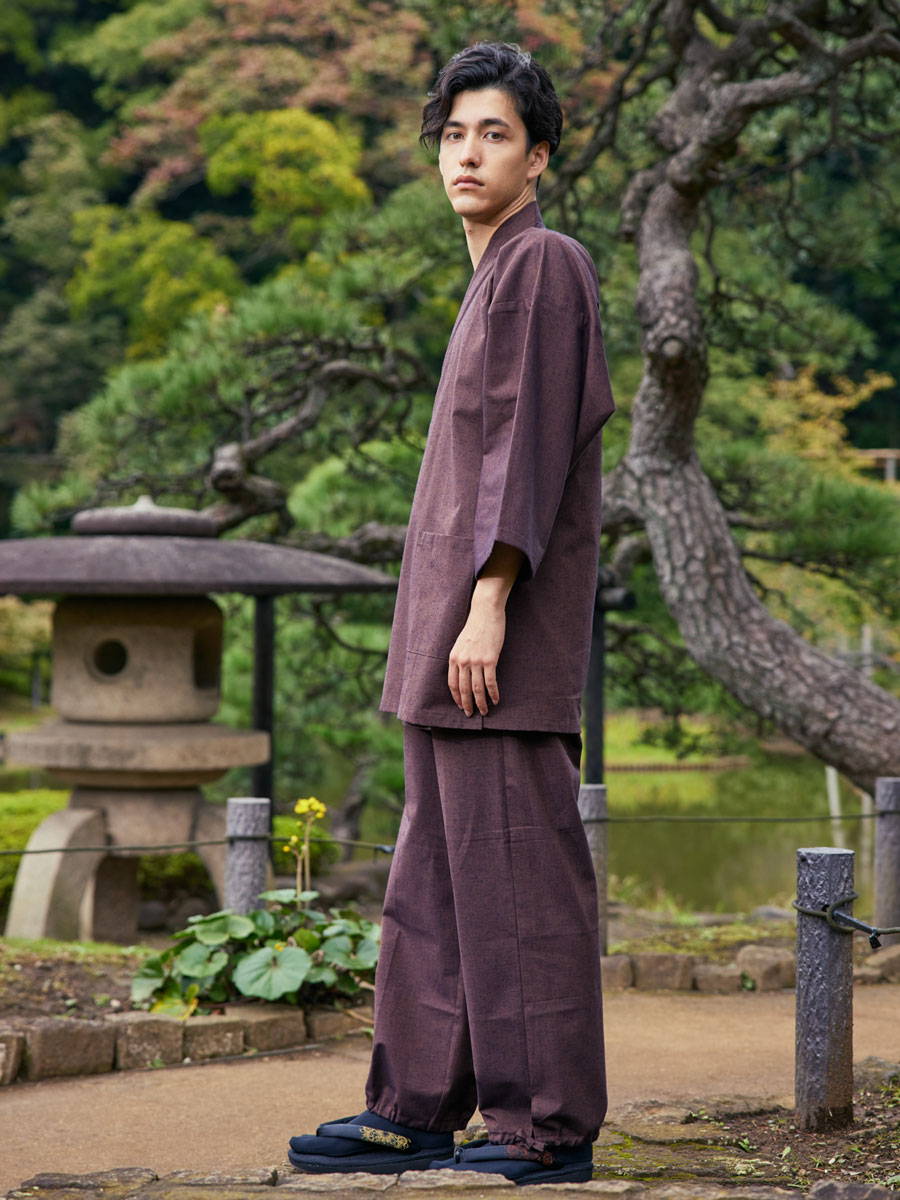 Because samue are so versatile you can easily incorporate it into your current wardrobe with little difficulty. However, if you’re looking to add authentic Japanese flair to your ensemble, then you've come to the right place! Start with a pair of quality slippers, like our Nagi Unisex Setta Sandals. Made from soft fibers, these handcrafted sandals have a thickly padded sole and rounded straps. You also can’t go wrong with selecting a thick cotton-padded hanten jacket to keep the seasonal chill at bay.

19. What Accessories Do I Need for a Women’s Samue? 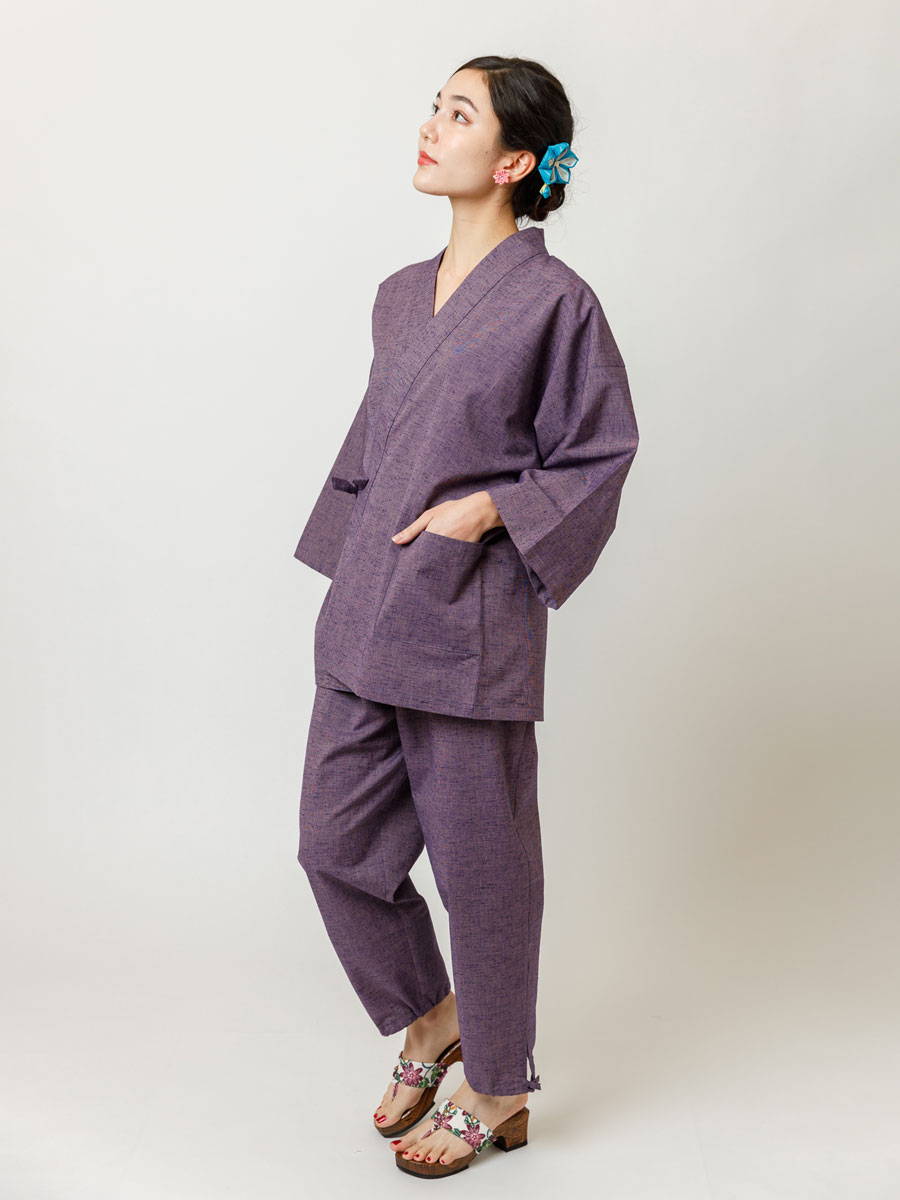 Samue are simple garments, which give you plenty of freedom to customize your look.

These handmade Bingata Wooden Geta Sandals in Passion Flower can be worn indoors or outdoors – much like samue! The botanical print is a work of traditional Okinawan dyeing craft that compliments all of the samue colors available in our shop. Remember, samue are work garments, so use a Cherry Blossom Kanzashi Silk Hair Clip to secure your hair and keep flyaways at bay. The clip doubles as a brooch, so you can pin it to the label of your samue jacket for a chic business casual look. You may also pair your samue with a cotton padded hanten jacket to stay comfortably warm indoors or when enjoying the seasonal changes on a stroll.

20. What’s the Difference Between Samue and Jinbei? 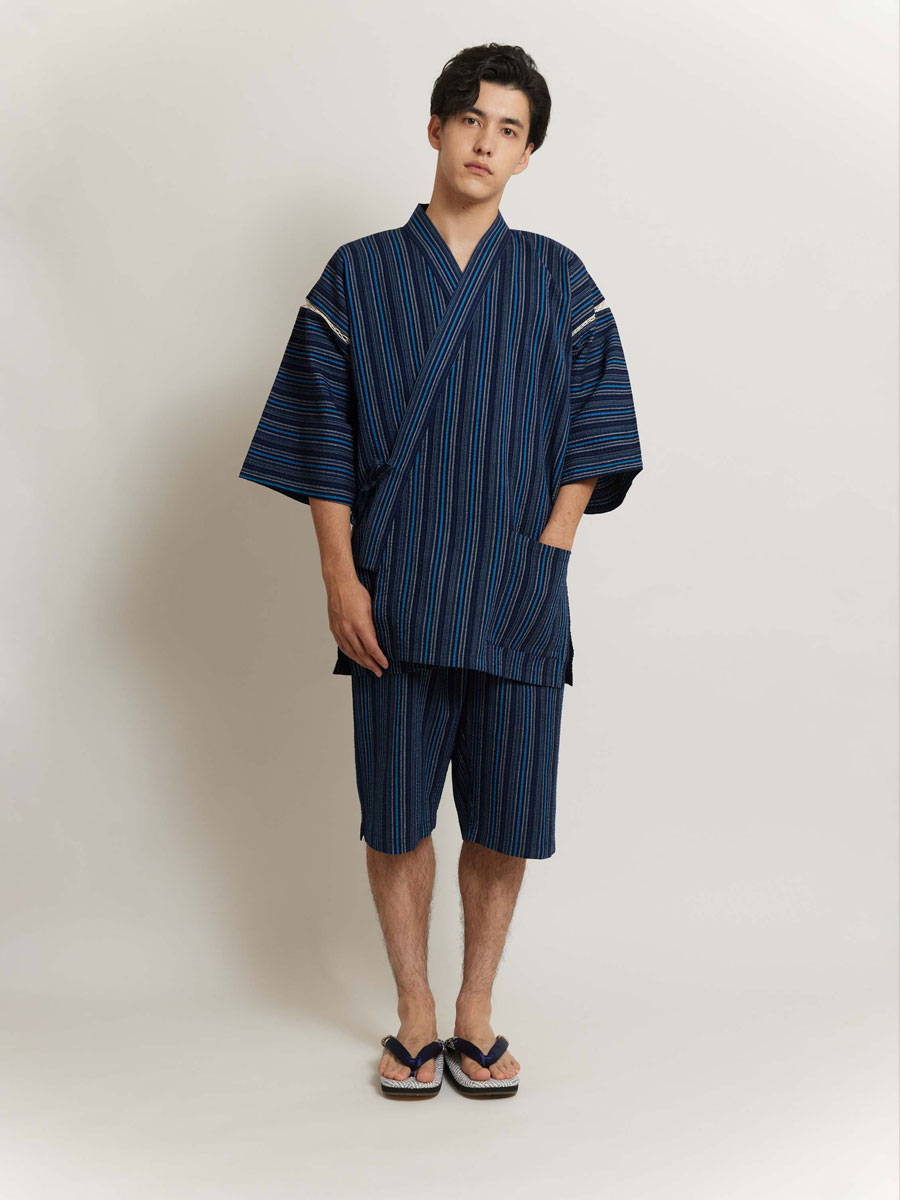 Jinbei are another traditional Japanese garment that are popular for women and men in Japan to this day. Jinbei and samue have a lot in common, but what sets them apart? The biggest difference is seasonality – samue can be worn year-round, whereas jinbei are an exclusively summer garment. This is why jinbei always have short sleeves and short pants, while samue has long sleeves and pants. For additional air-flow during hot and humid Japanese summers, jinbei often have see-through yarn knit patches on the shoulder hems. Check out 33 Traditional Japanese Clothing to find out more!

1 2 Next
Back to Editorial