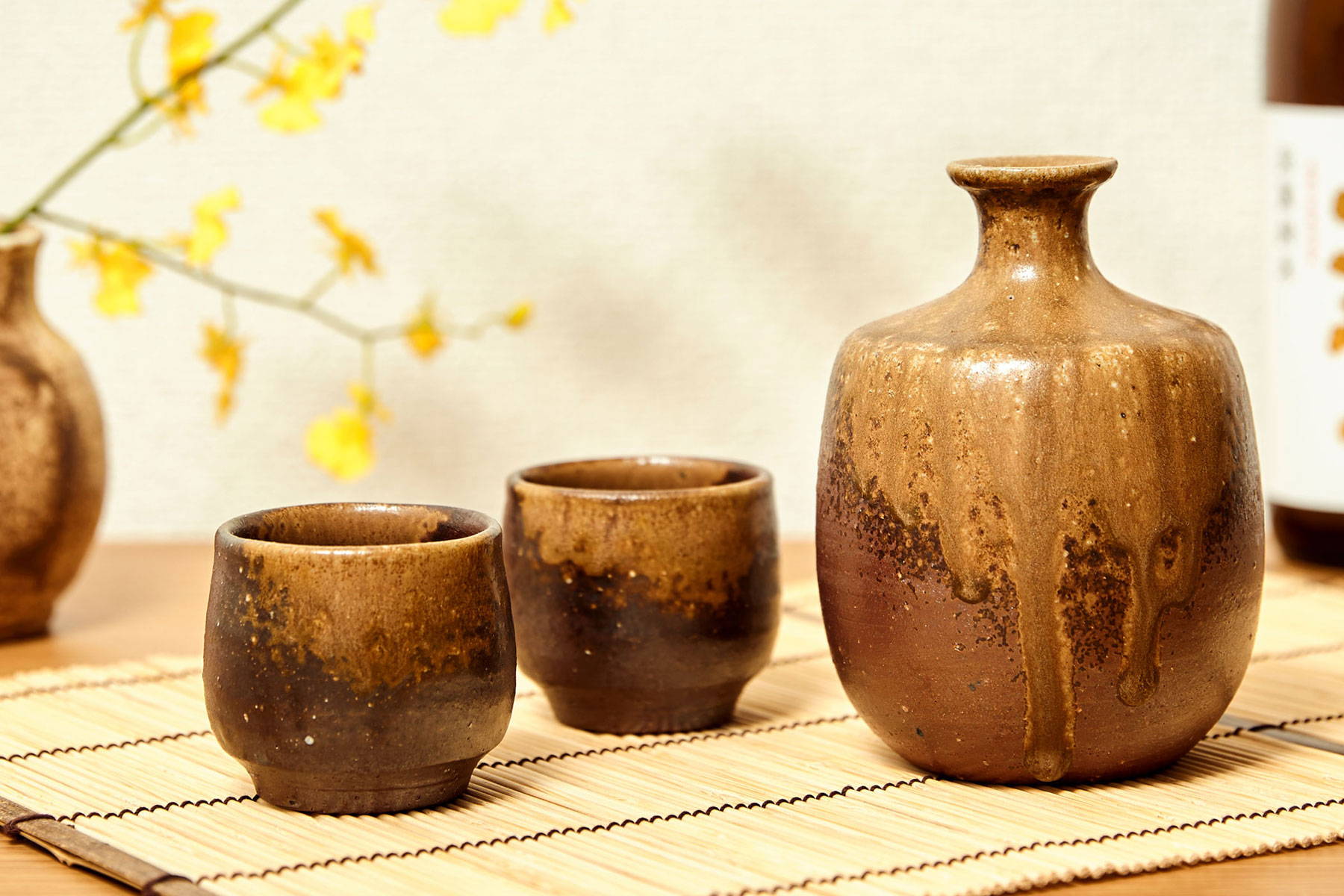 The simplicity of Bizen-yaki has been appreciated during centuries for its wabi sabi nature: subtle, imperfect, unique, gaining charm and beauty with time and use.

Nowadays, when life goes so fast and chemical materials can be found everywhere, holding a perfectly crafted object in natural Bizen clay in your hands is a delightful sensation. You can feel its texture and enjoy its natural colors and unique patterns. Over time, these expertly created pottery items will develop a patina and a unique character.

At Japan Objects, we are very proud to present our very best selection of Bizen pottery and we hope that you will like them and enjoy them as much as we do!

1. Why is Bizen Pottery so Famous in Japan? 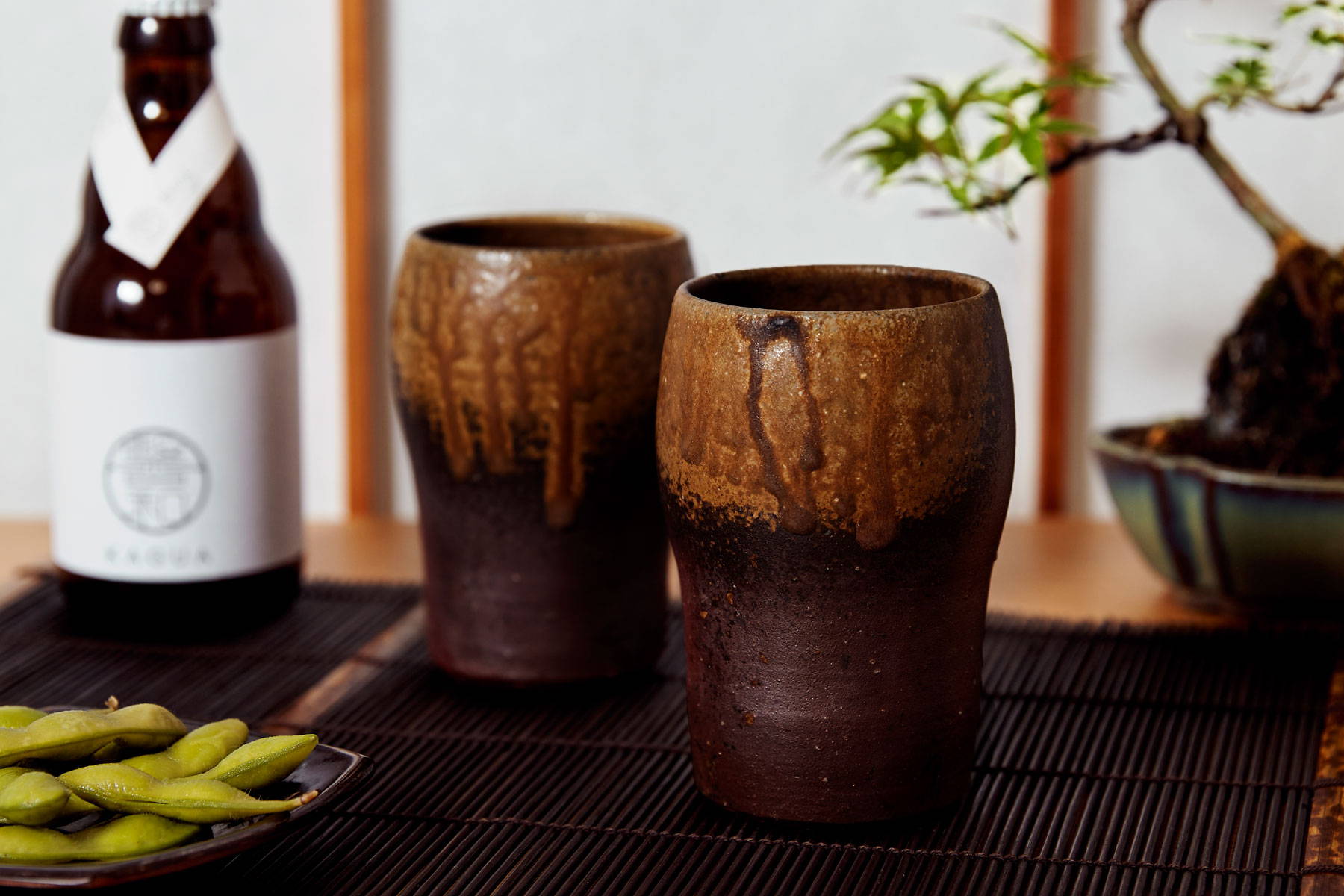 Created in the region around the city of Bizen, in Okayama prefecture, Bizen-yaki (備前焼) is emblematic in Japan for its simple, pure, and slightly rustic appearance. Bizen is known as one of Japan's Six Ancient Kilns. The development of these kilns and techniques have been well-preserved, some dating back as far as the Jomon period over 2000 years ago. They represent an important contribution to Japan’s traditional culture and have been protected as Japan Heritage sites since 2017. 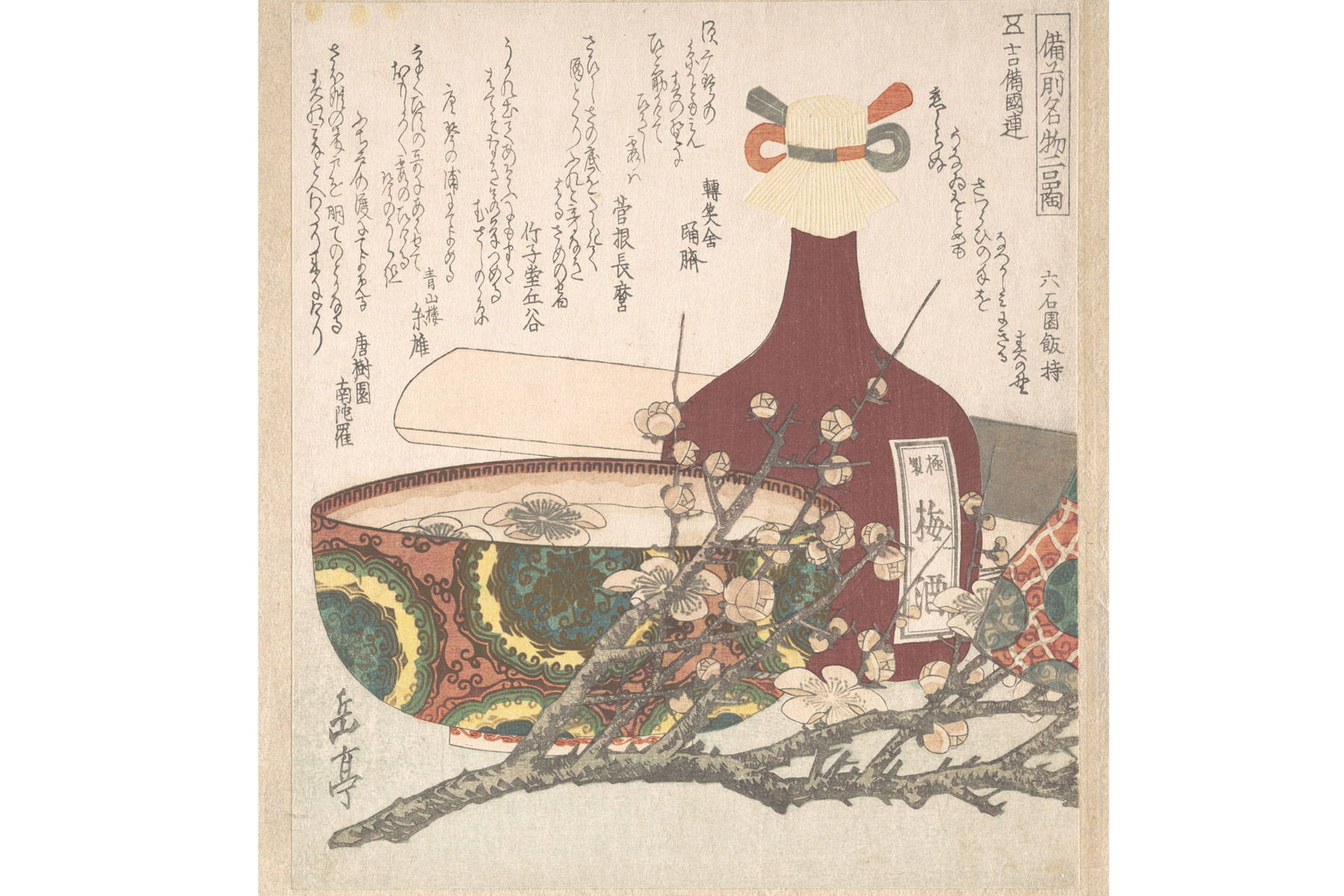 In the 16th century, Bizen ware earned the preference of Sen no Rikyu, the famous master of the tea ceremony, for its wabi sabi aesthetics. The concept of wabi sabi is a key notion in the Japanese consciousness: the appreciation of the transitory beauty of an imperfect item, which becomes even more beautiful as time passes, and therefore acquires a particular charm and an untranslatable perception of peacefulness.

2. What is So Special about Bizen Ware? 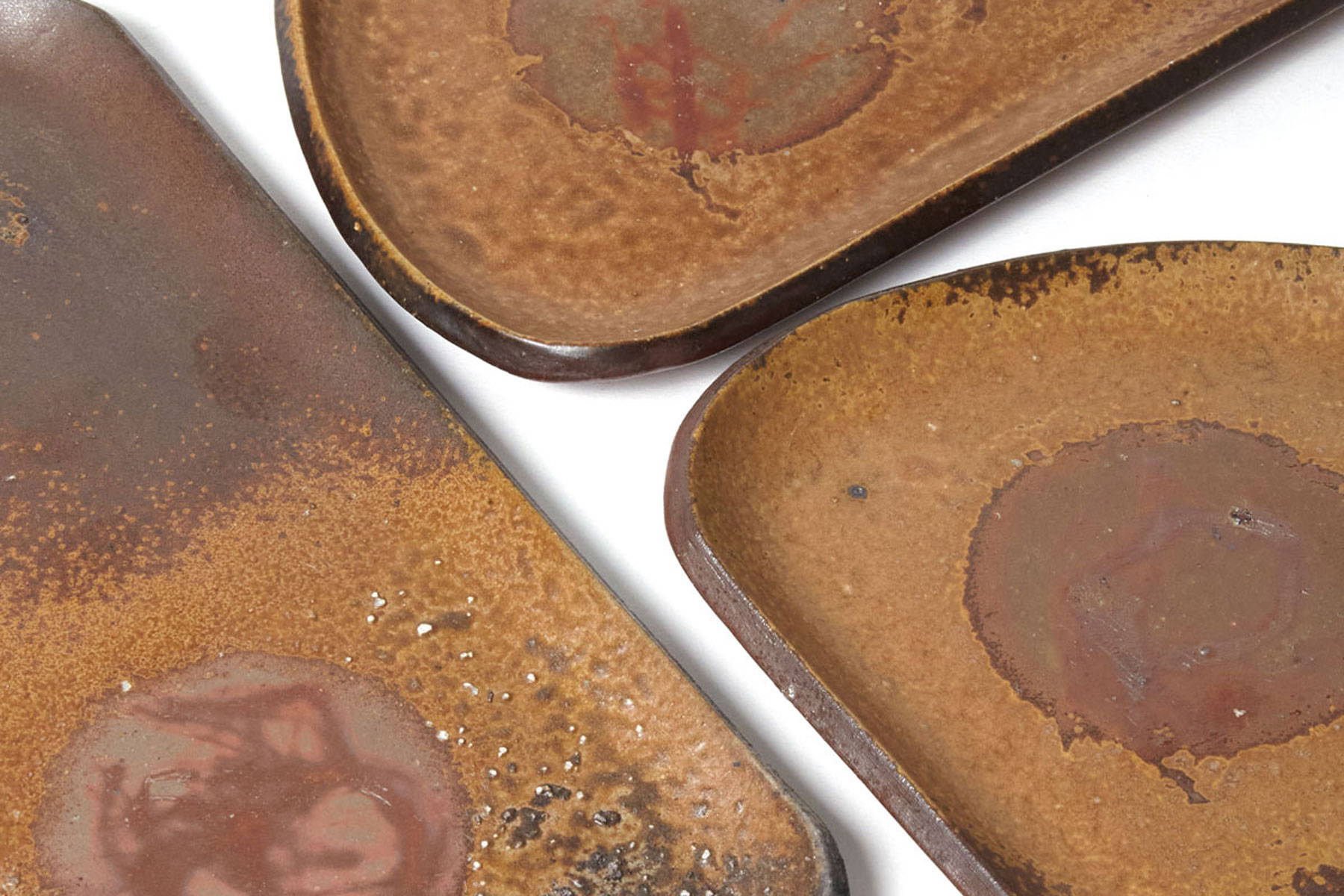 Working with hiyose Bizen clay is not an easy task. Expert abilities are necessary to shape the pottery pieces and place them skillfully inside the kiln. Usually not glazed, Bizen ceramics sometimes look uneven. To the untrained eye they may look less delicate and sophisticated than white porcelain, but their beautiful nuances give a natural and distinguished aspect to any table. 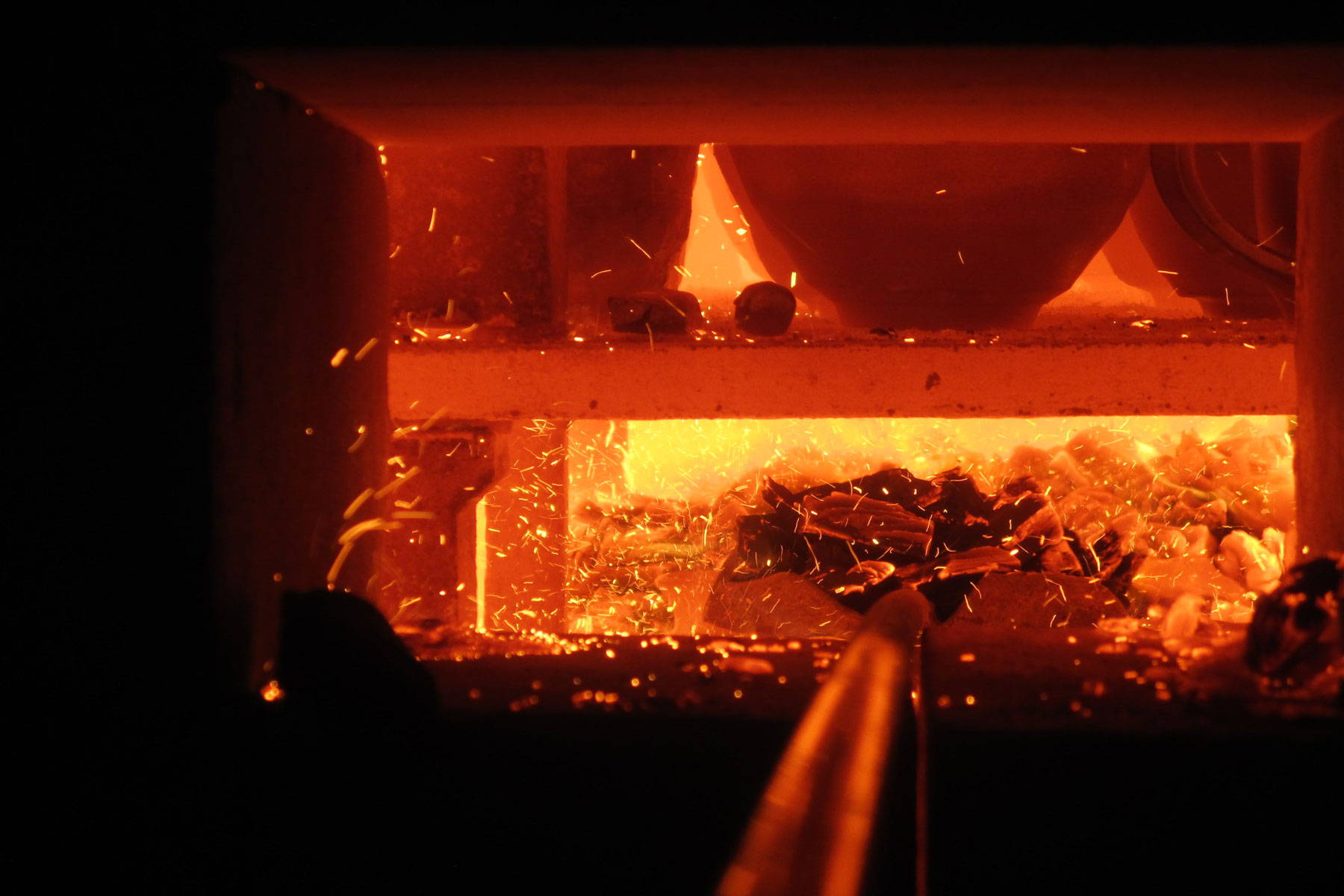 The firing process is so long and laborious that most kilns only do a firing once or twice a year. During this extraordinary moment, the artisans skillfully arrange the cups, plates, or vases in the kiln. They do not move the pieces for several hours, hoping for the greatest results. Inside the kiln, pine tree ash flies and sticks to the clay, adding a natural glaze to the surface. Consequently, the setting of the pottery items in the kiln, the condition of the fire and the quality of the ash are essential elements. The final appearance of each piece is not entirely predictable, making every cup or dish exclusive and unique. 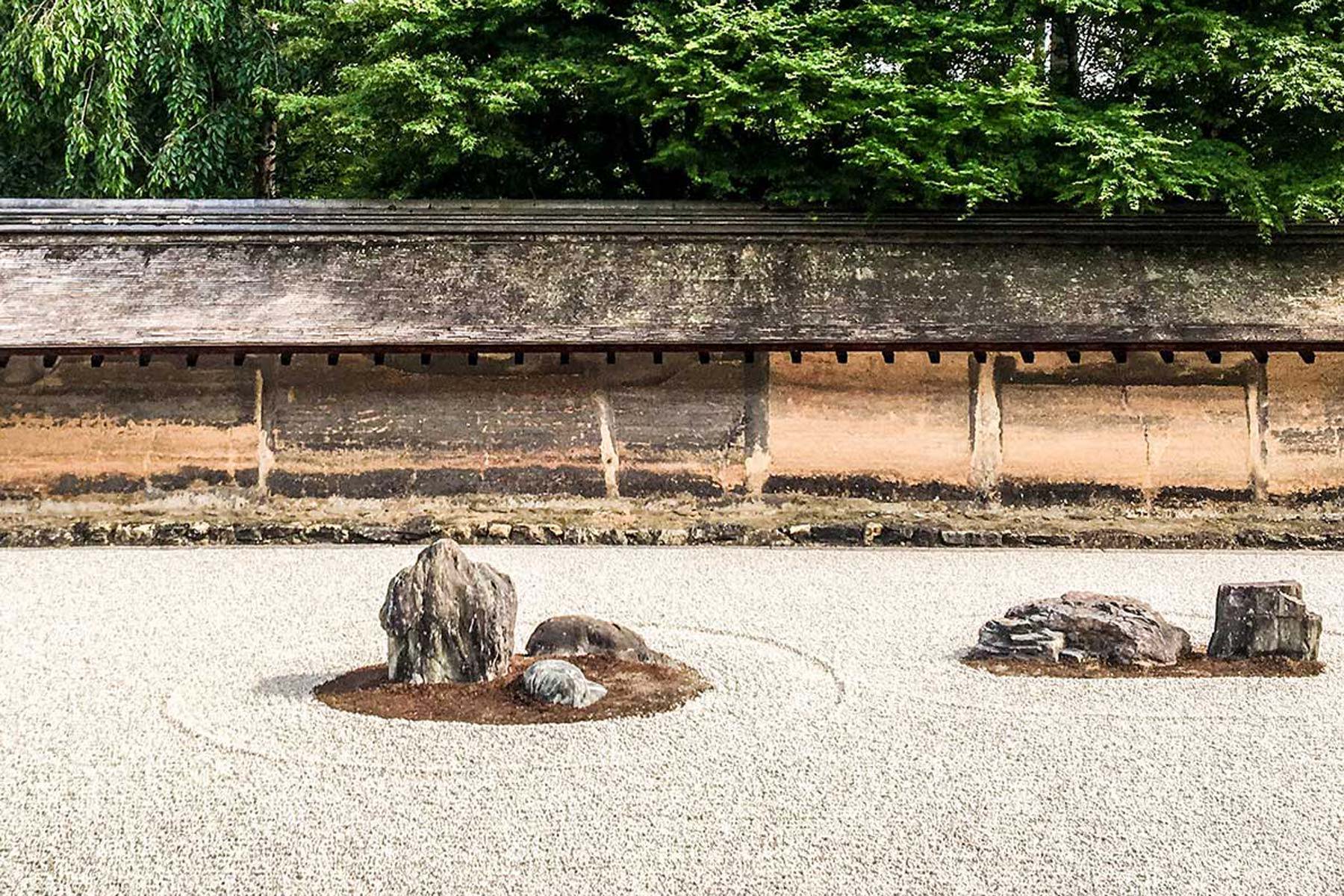 In his book Wabi Sabi: The Japanese Art of Impermanence, Andrew Juniper describes wabi sabi as "an intuitive appreciation of ephemeral beauty in the physical world that reflects the irreversible flow of life in the spiritual world.”

The term wabi sabi is composed of two kanji characters. The term wabi (侘) appeared in the 15th century to describe a new aesthetic related to loneliness or melancholy, and linked to a serene life, far from the urban effervescence. The second part, sabi (寂) is said to date back to the 8th century, when it was used to designate desolation in a poetic manner. From the 12th century, the term referred to the delightful contemplation of what is old and worn. It was also employed to describe the beauty of faded or withered things. Sabi could also mean “old, elegant”, or “rusty”, with an untranslatable impression of serenity. 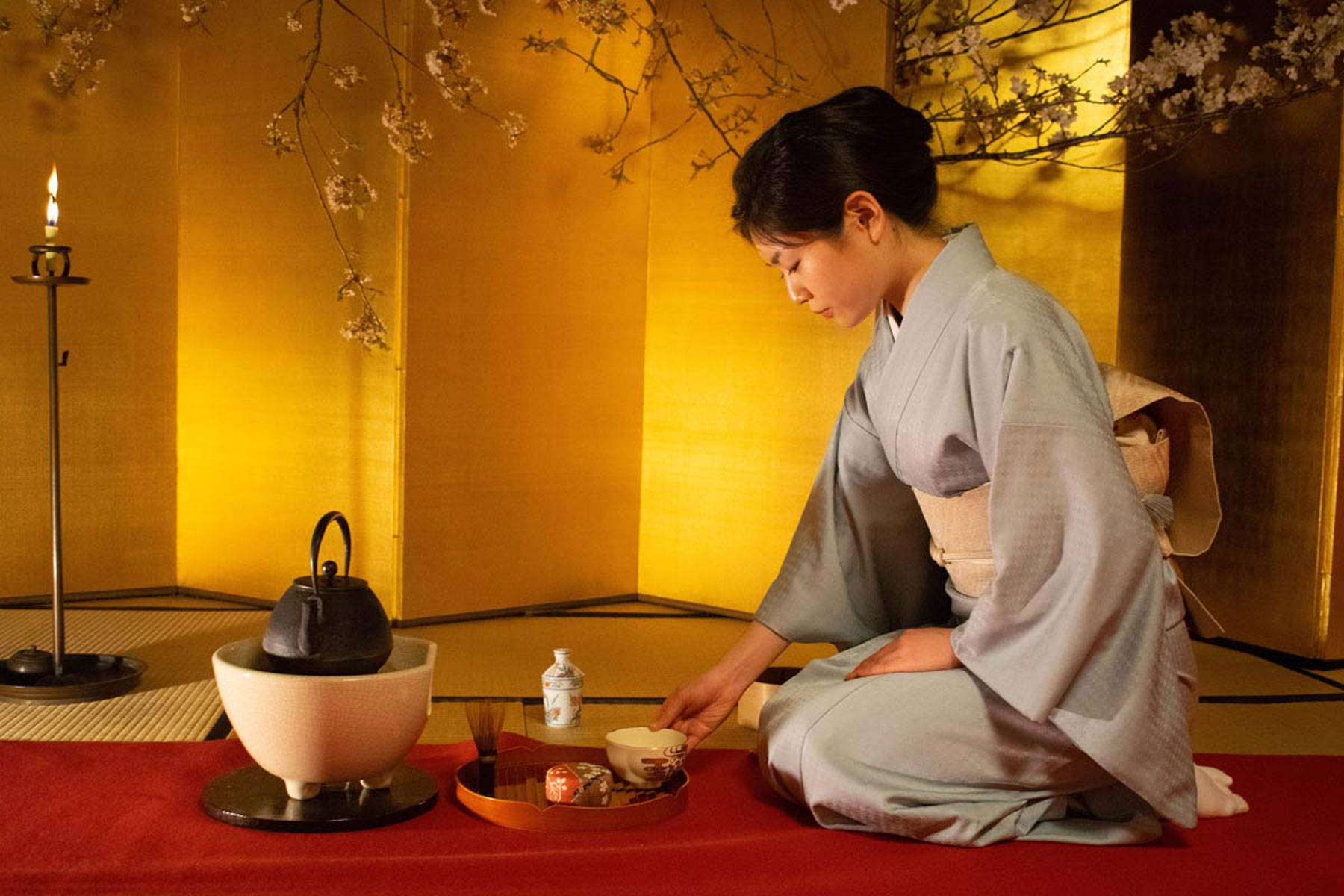 For Japanese people, wabi sabi is a feeling, more than a concept, that can be noticed in classical Japanese aesthetics: flower arrangement, literature, philosophy, poetry, tea ceremony, Zen gardens, etc. It is the contrary of contemporary over-consumption and encourages simplicity and authenticity in everything.

4. The Legend of Wabi Sabi and the Birth of Wabi-Sabi Pottery 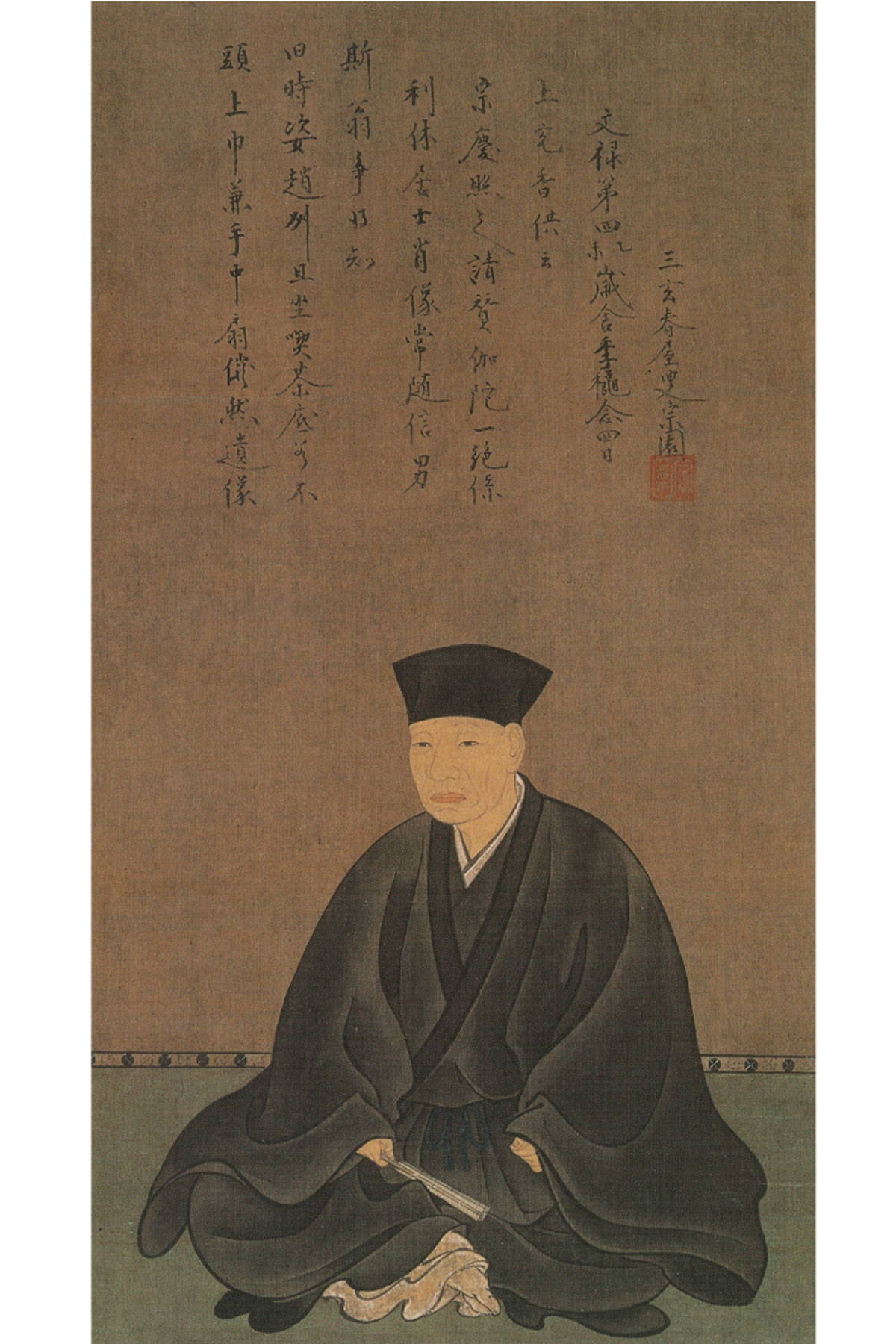 According to the legend, the young Sen no Rikyu, willing to learn the codes of the ancestral ritual of tea ceremony, went to find a distinguished tea master named Takeeno Joo. The latter wanted to test the capacities of his new apprentice and asked him to take care of the garden. Rikyu cleaned it and raked it until it was perfect. However, before presenting his work to his master, he shook a cherry tree and its light pink flowers fell on the ground. This touch of imperfection brought beauty to the scene, and this is how the concept of wabi sabi was born.

Sen no Rikyu is still considered as one of the greatest and most influential tea masters in history. He helped to transform the tea ceremony as it was previously practiced with luxury utensils and exuberance, into a humbler ritual. The simplicity of the objects and the minimalistic atmosphere of the tearoom evoked a delicate beauty that could not be equaled.

By using imperfect objects, sometimes broken and repaired, in a room devoid of superfluous items, Sen no Rikyu made the moment of tea tasting a true communion for the soul, which was nourished by the following principles: harmony, purity, respect and tranquility. This style of ceremony is also referred to as wabi-cha (cha being the Japanese word for tea). 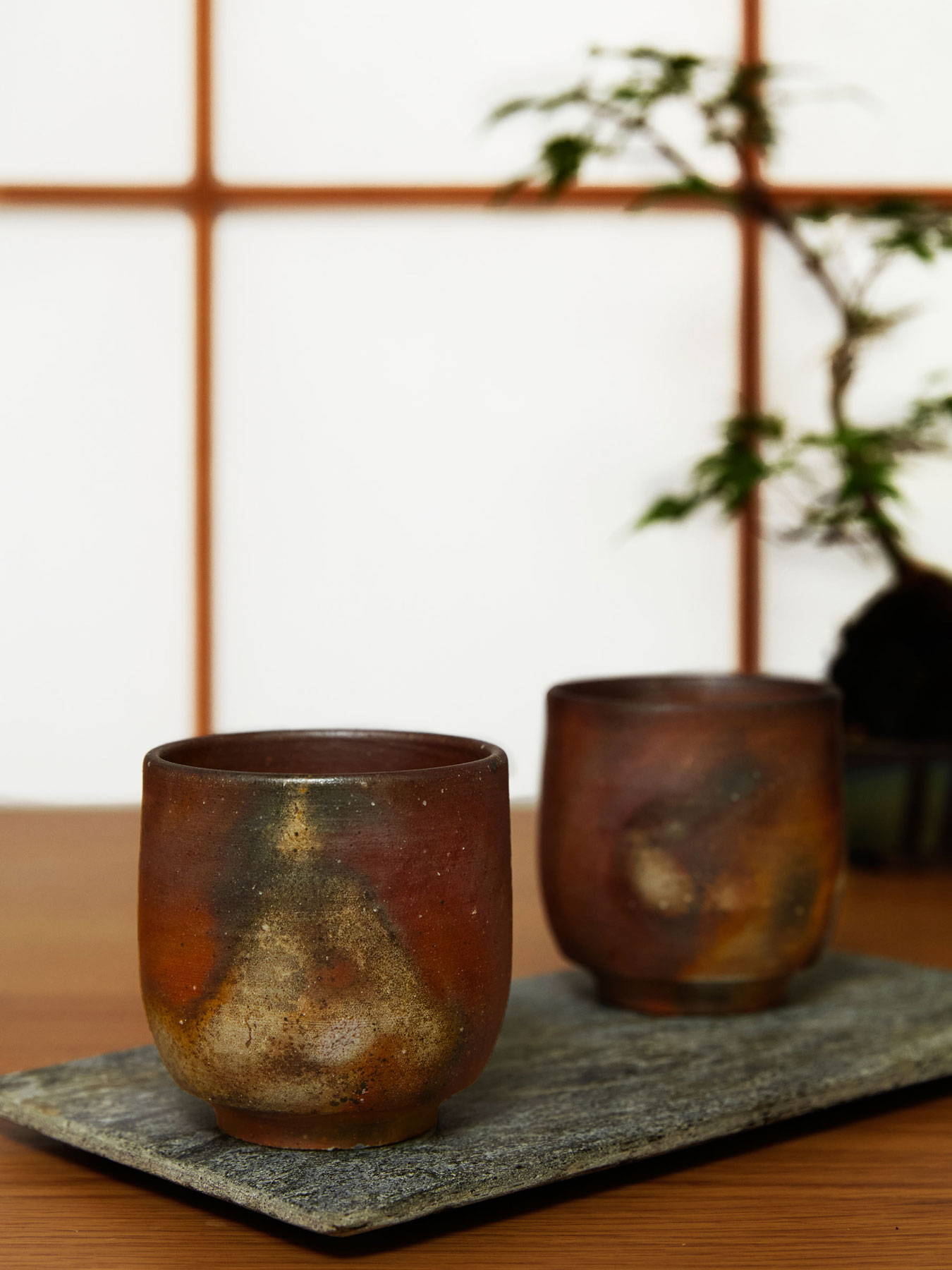 Nowadays, the most prestigious tea ceremonies are still carried out with teacups that are several hundred years old and antique utensils. In Japanese pottery, cups are often distorted and irregular because each object must be unique to have its own charm.

5. What are the Most Famous Patterns and Colors for this Ancient Japanese Pottery?

Bizen ware pieces are usually not painted nor engraved. Nevertheless, there are characteristic patterns and decors that are typical from Bizen. 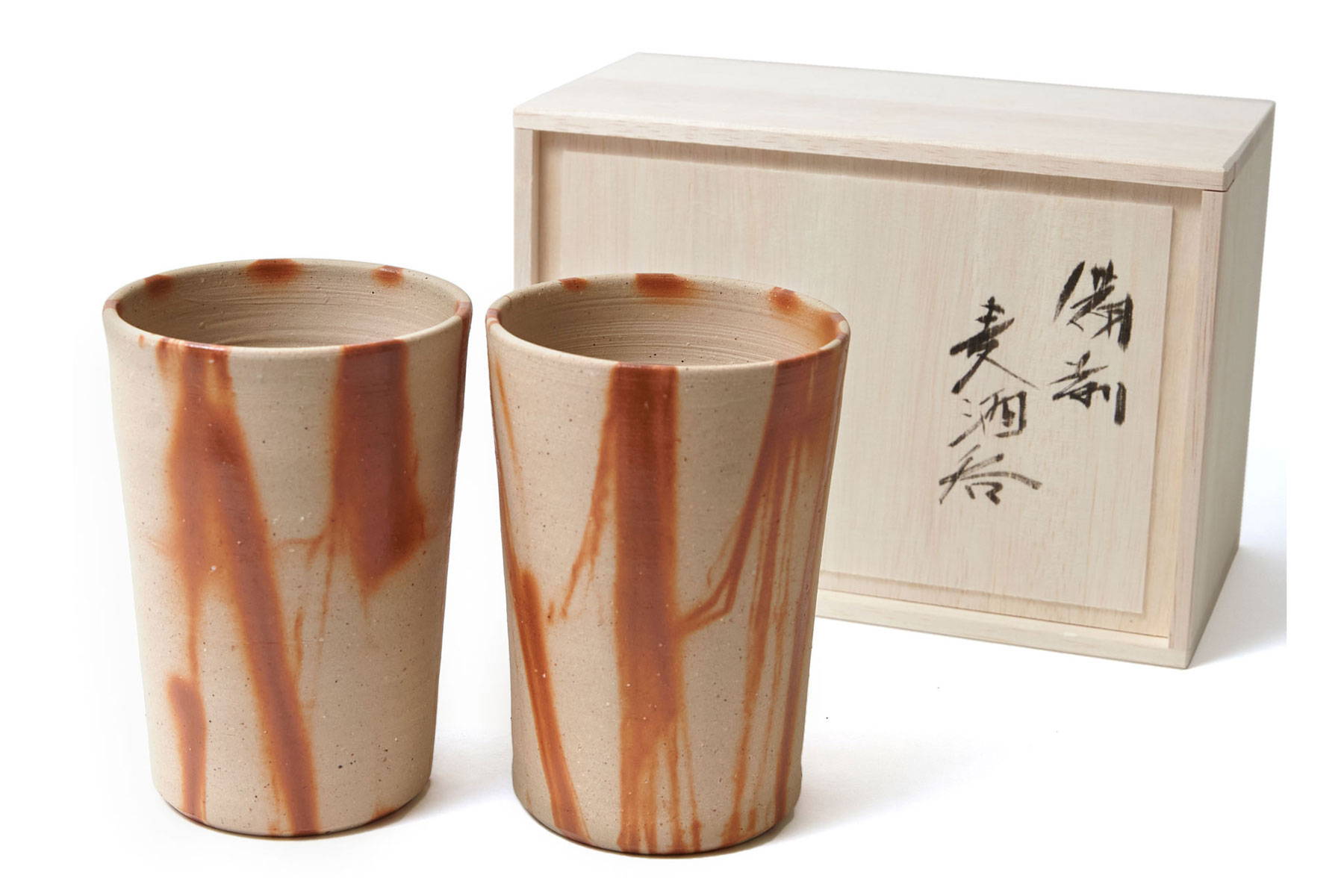 The hidasuki (緋襷) pattern, has become unique feature of Bizen-yaki over the centuries, although it is thought that it’s invention was originally an accident. The pottery pieces are wrapped with rice straw before firing. In the kiln, a chemical reaction occurs between the iron content in the clay and the straw, achieving a distinctive red-colored “flames” pattern. 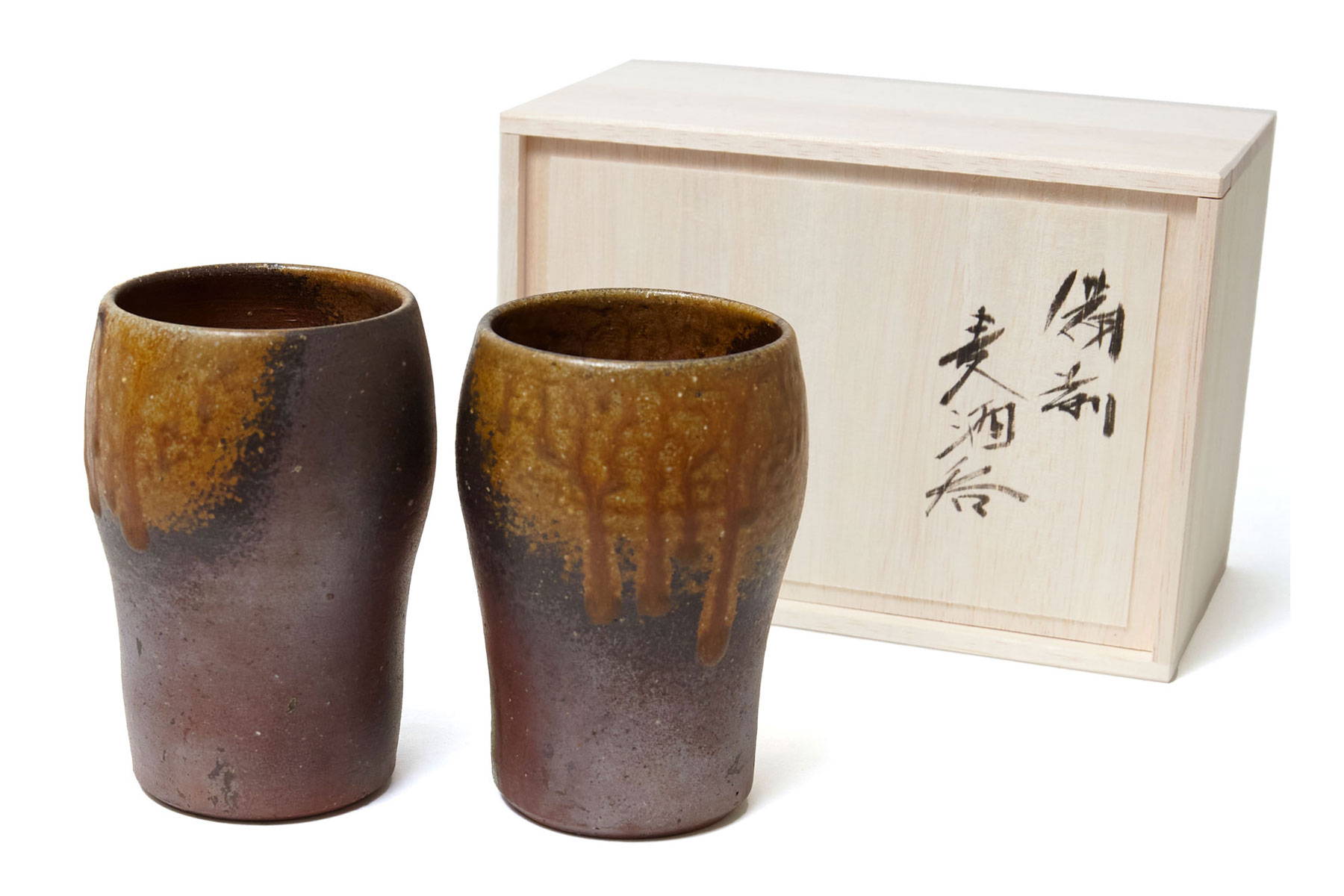 Another interesting Bizen technique is named goma (胡麻, lit. “sesame seeds”) and is a characteristic feature of Bizen-yaki. It features a glossy and sometimes grainy ochre decor on the surface.

If you spot a round pattern on a Bizen plate, this pattern is called botamochi (牡丹餅, lit. “peony mochi”, a pink rice ball wrapped in a layer of red beans). This enhancement is achieved by placing small round plates on larger plates, to protect them from flying ash. 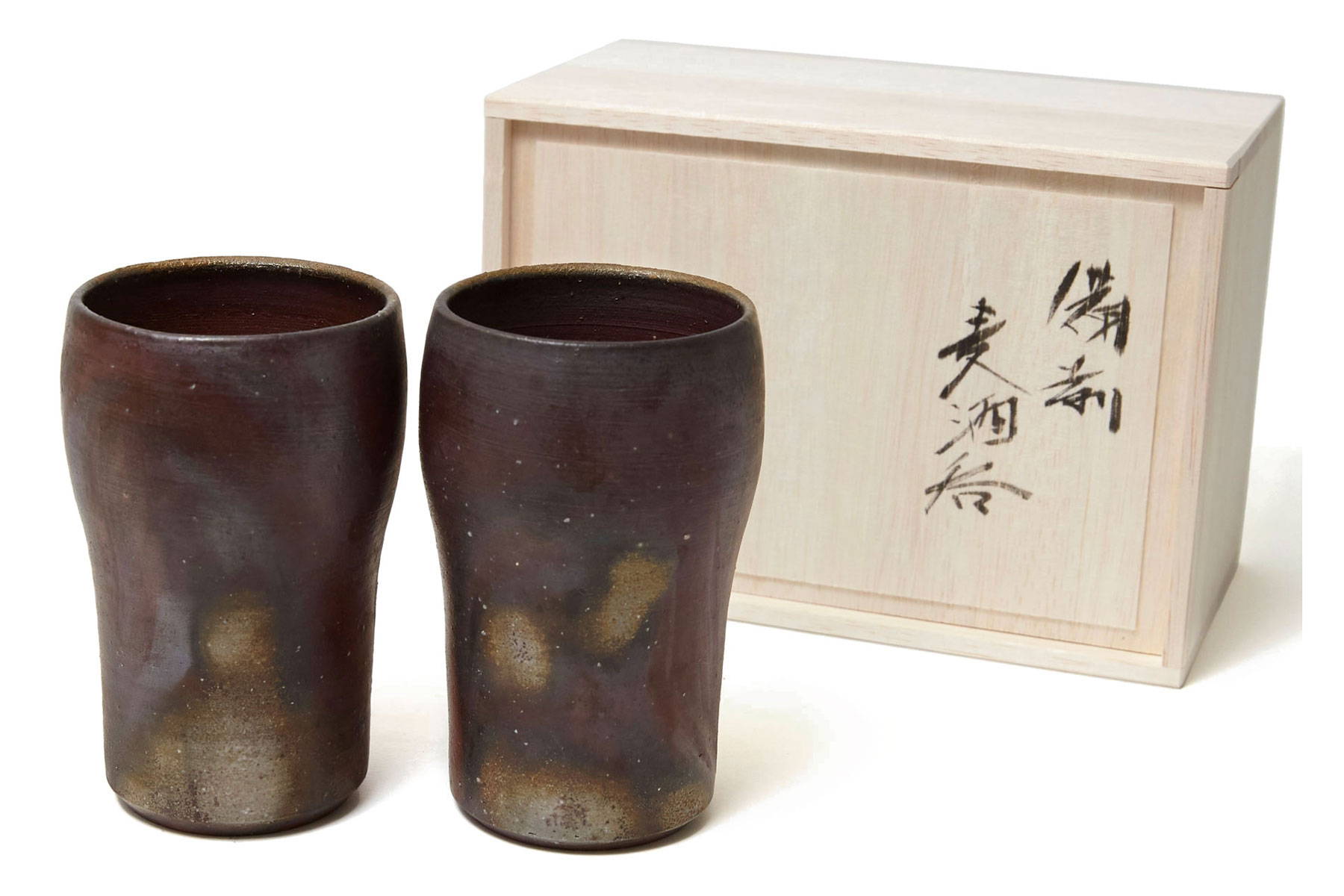 Sangiri (桟切り) is an enigmatic pattern and a characteristic feature of Bizen-yaki. During reduction firing, the flow of air may be blocked, and the embers fall on the wares. The chemical reaction between the iron contained in the clay and the carbon from the embers give birth to enchanting natural glaze tones, from white to blue and gunmetal grey.

Every outcome is unique, and every pattern is extraordinary. You will never find “identical twins” in Bizen pottery items. Over time, these skillfully crafted pieces acquire a patina and a wabi sabi feel.

6. How to Add a Touch of Wabi Sabi to Your Home? 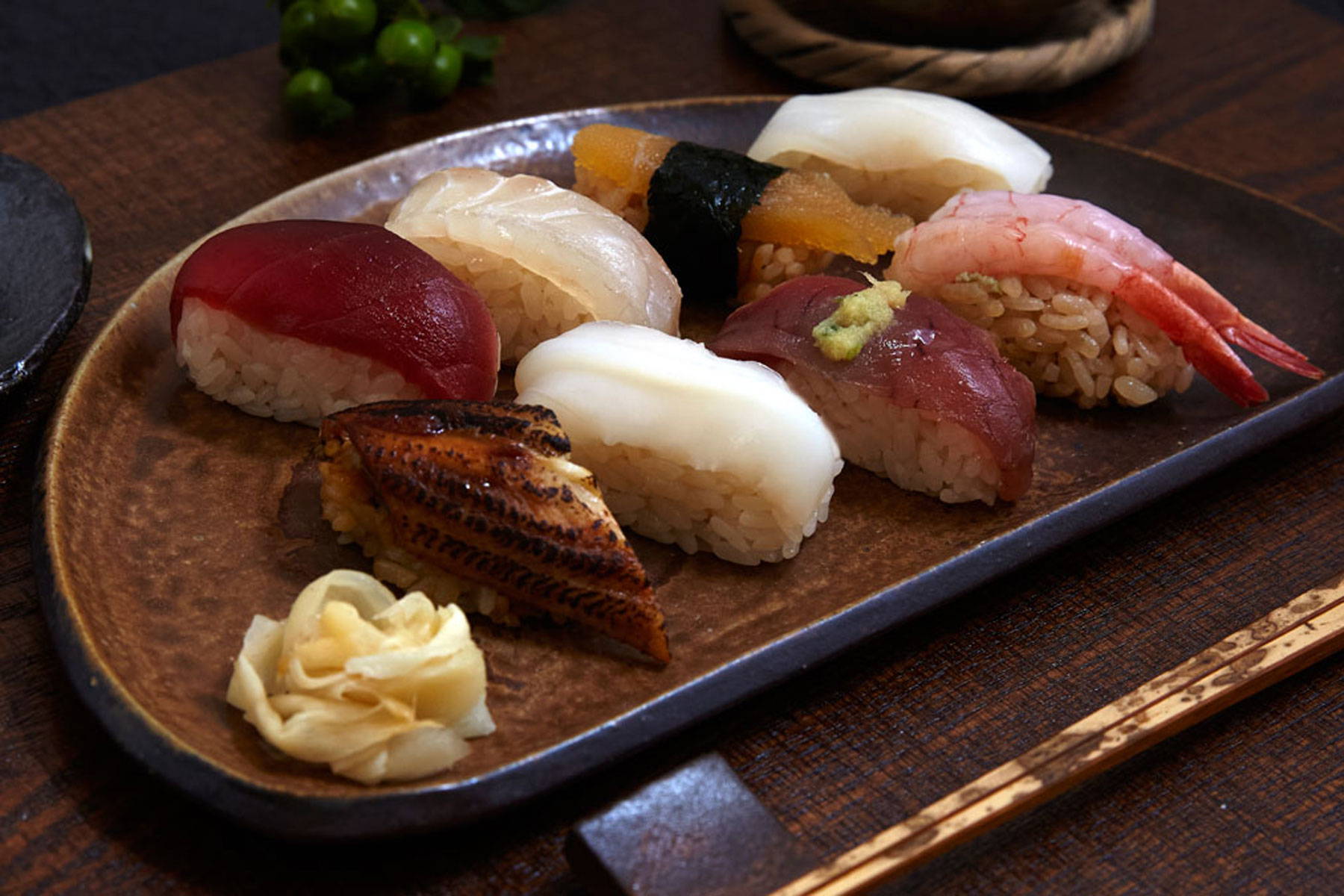 At Japan Objects, we have sourced the most charming Bizen-yaki pottery pieces to bring wabi sabi to the comfort of your own home and to your everyday life. For your kitchen and dining experience, we have selected several types of Bizen plates and platters, which can be used as sushi plates, but are also perfect to serve appetizers, desserts, biscuits, and sweets as well. 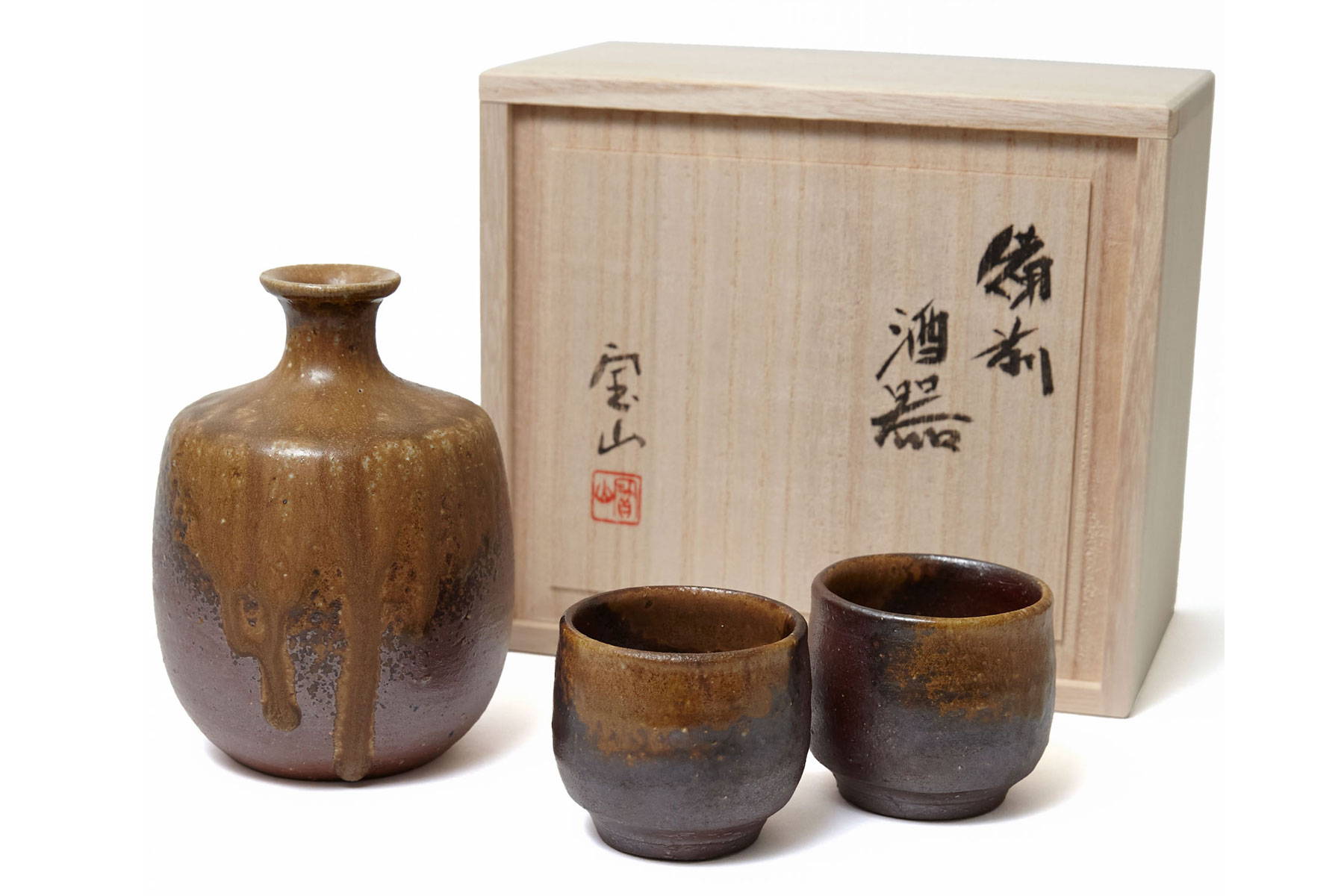 You will also find sake sets (a sake bottle and matching cups) and beer mugs. Serving beer in a clay mug instead of a glass pint makes its tasting totally different. In fact It is said that the iron contained in Bizen clay enhances the aroma and taste of beer. 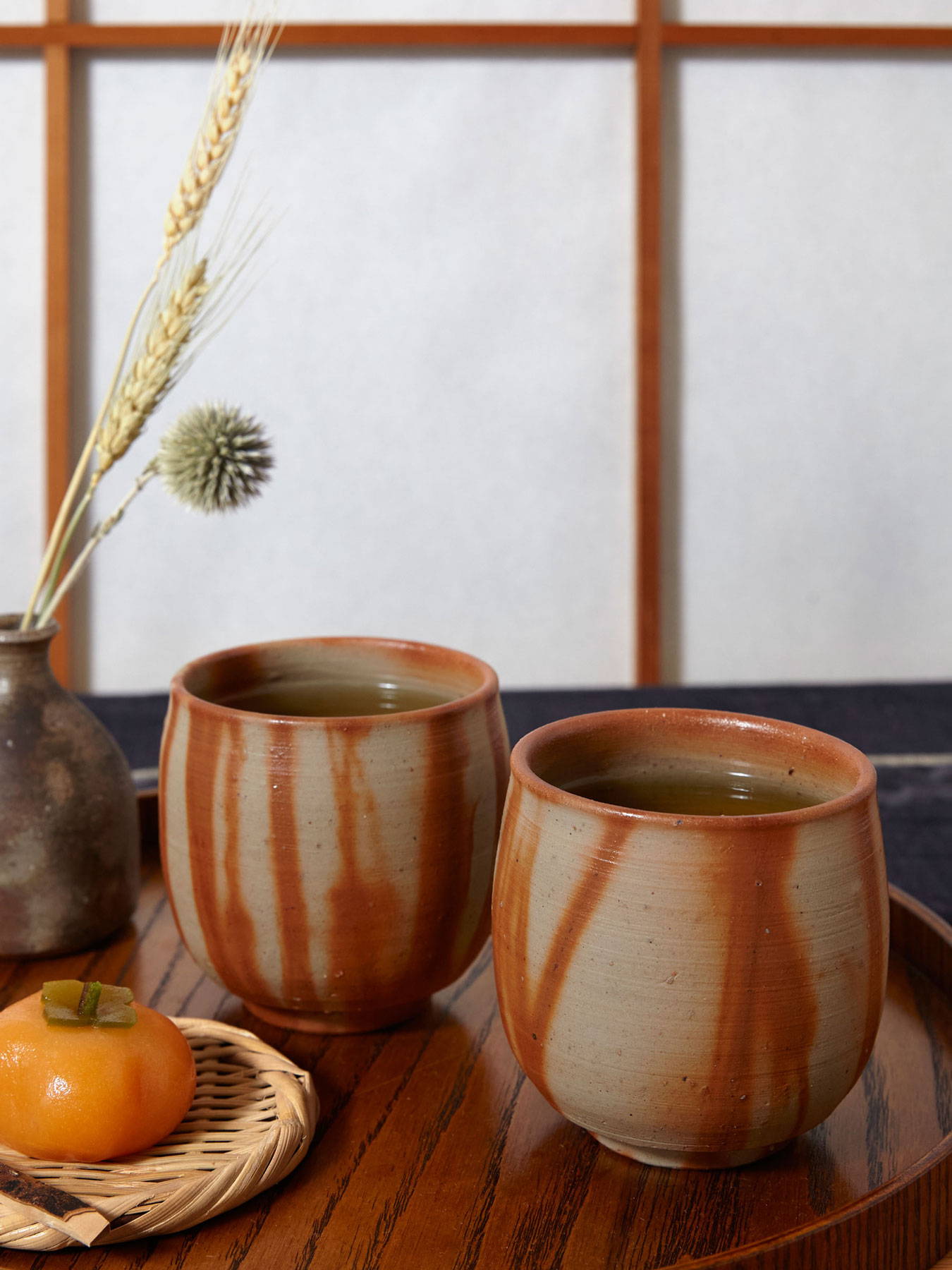 For Japanese tea lovers, yunomi bizenware teacups have a similar effect on the taste of tea. In Japan, yunomi teacups are often seen as a present for a married couple, but we find that they are a charming and always appreciated present for anyone enjoying tea. 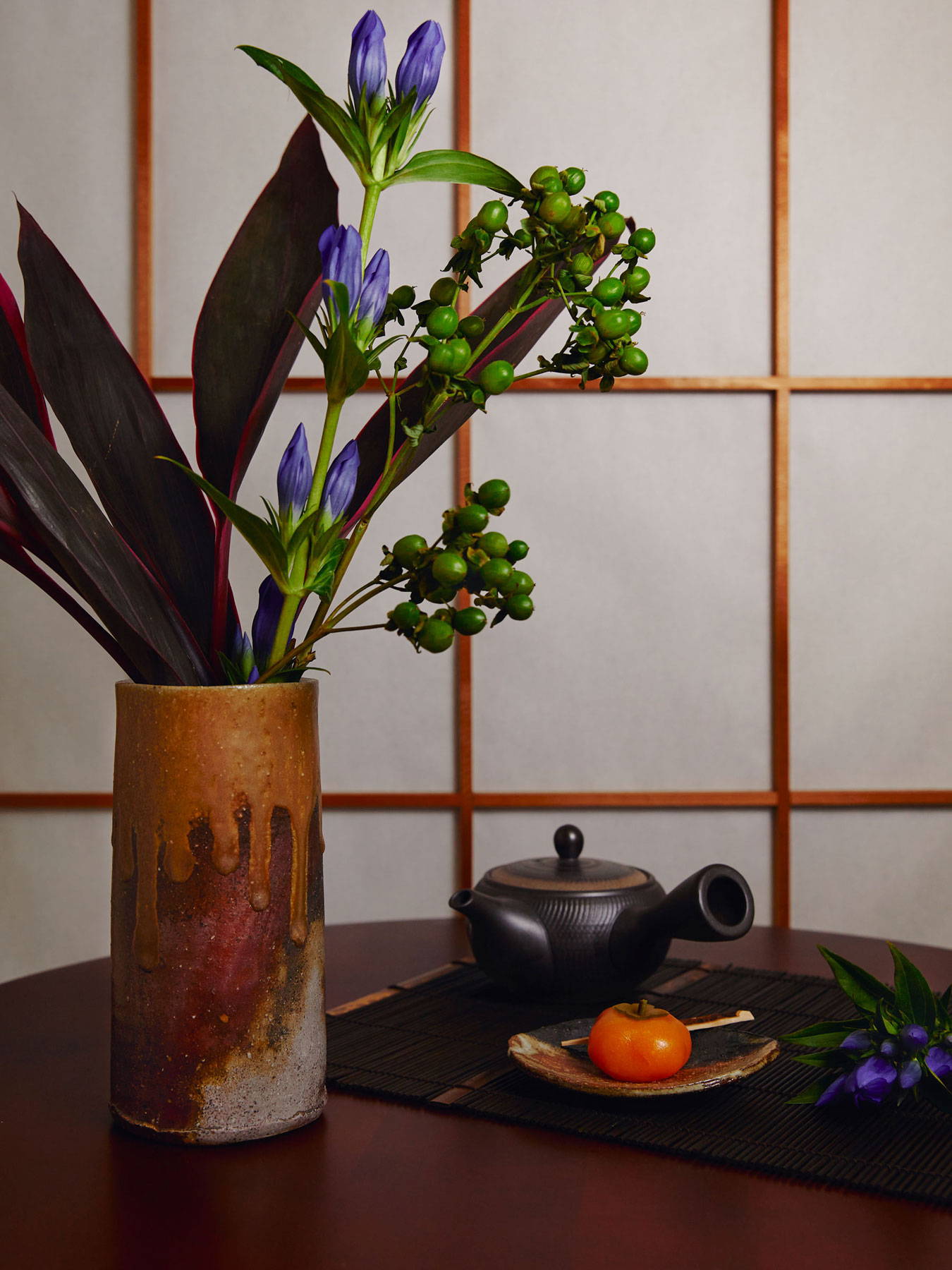 And if you appreciate Japanese home decor, an enchanting Bizen-yaki vase could do the trick. A single flower, a small tree branch or a delicate Ikebana composition, these Bizen clay vases will complement and highlight any floral arrangement.

7. Where Do We Source our Most Beautiful Wabi Sabi Pieces? 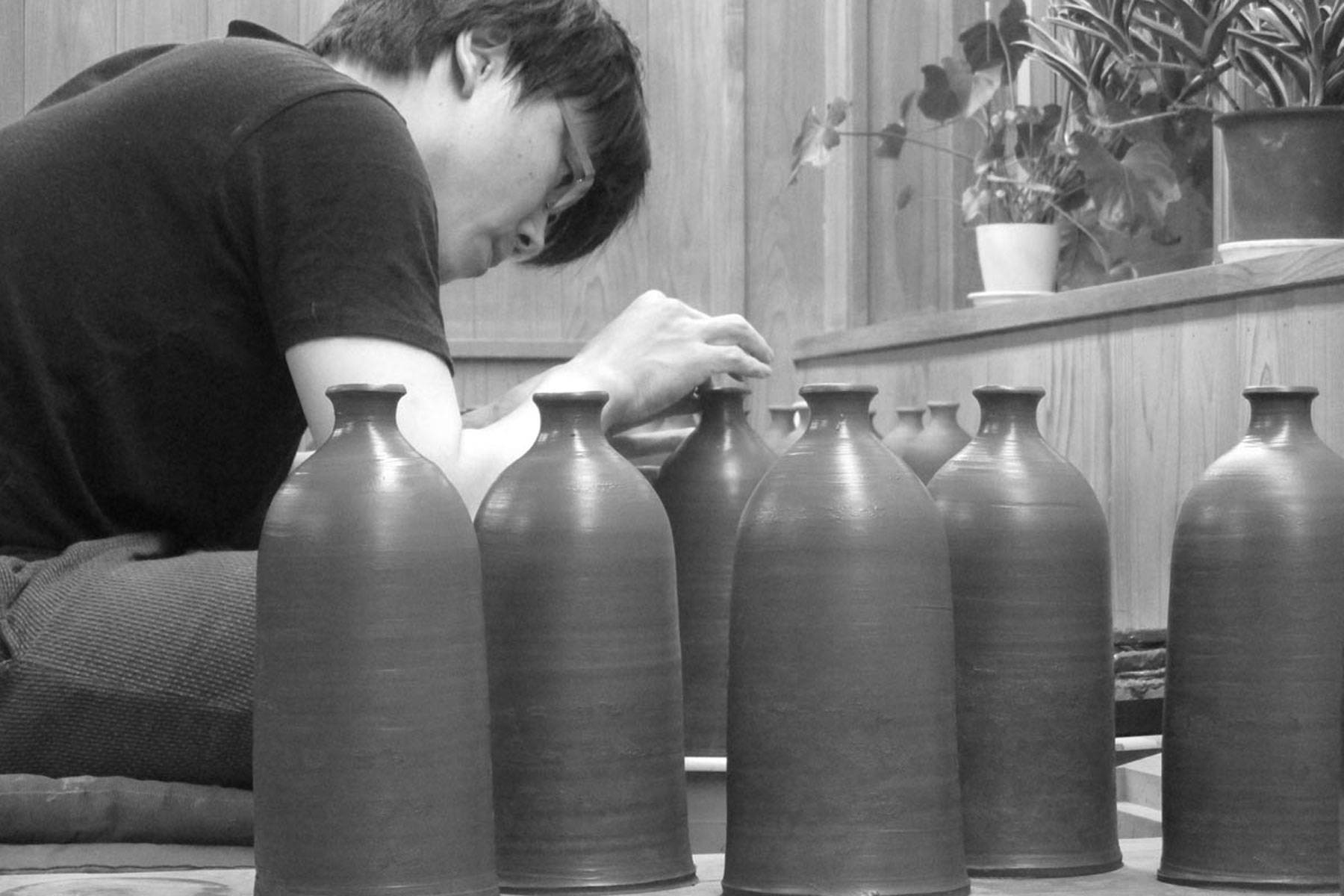 Our sushi plates, yunomi cups, beer cups and vases are handcrafted by Hozangama, a kiln based in the neighborhood of Imbe (pottery village), in the town of Bizen. A direct descendant from the original six Bizen-yaki potter families, Toshiyaki Mori, has received awards at various national ceramics exhibitions and has exhibited his works internationally, in the USA, in the UK and in Taiwan.

If you are looking for a special gift for a loved one or for yourself, we highly suggest you to have a look at our curated selection of Bizen-yaki wabi sabi items!