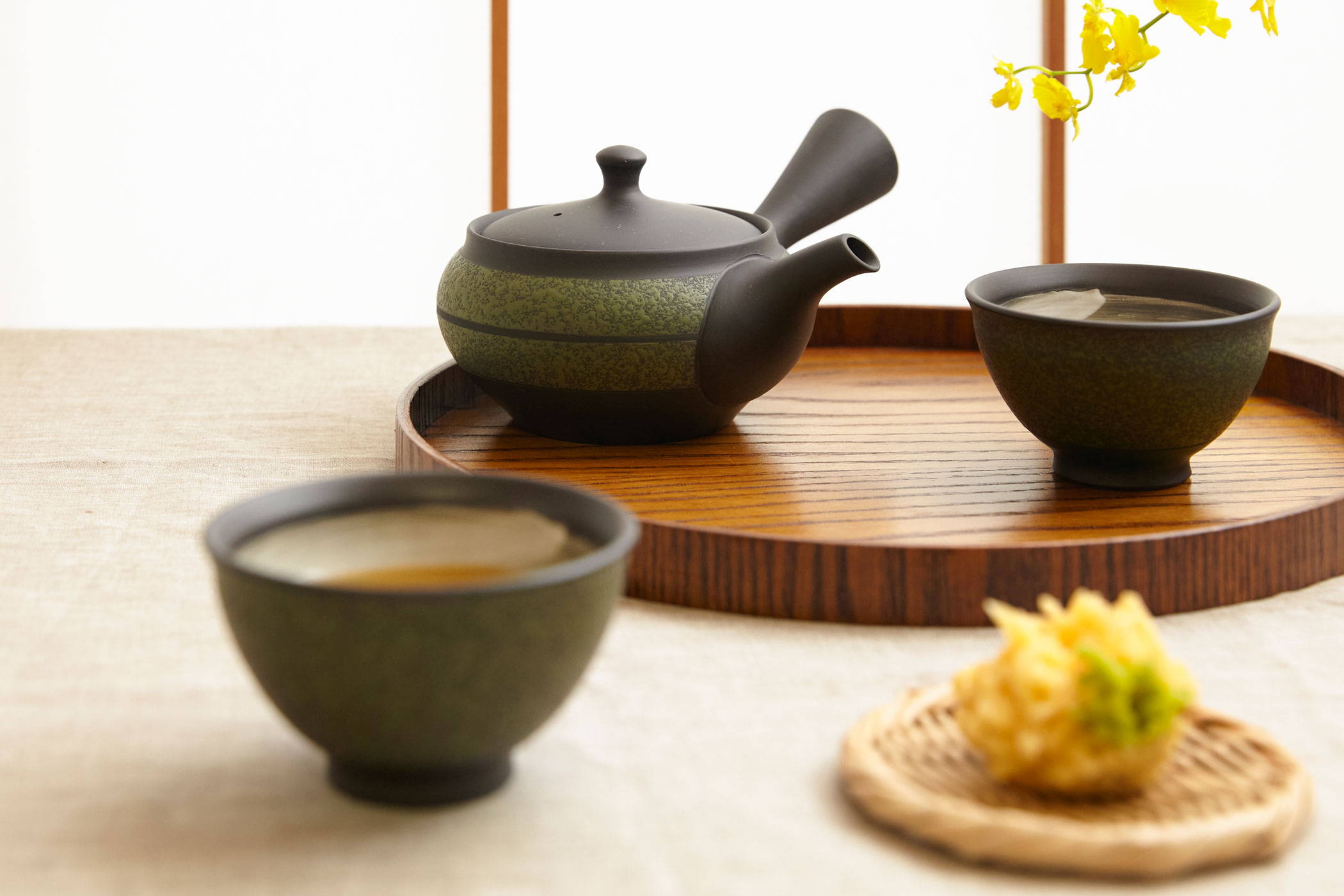 Tokoname in Aichi prefecture is undoubtedly one of the most famous ceramic regions in Japan. For over 1000 years generations of master potters have created tea ware with Tokoname clay, renowned for its high-iron content.

Tokoname artisans create exceptional teapots, teacups, tea bowls, sake bottles and cups that are lightweight, durable, and beautiful. At Japan Objects Store, we are very proud to offer a curated selection of Tokoname-ware from the most excellent kilns and craftspeople of the region.

1. What are Tokoname Ceramics? 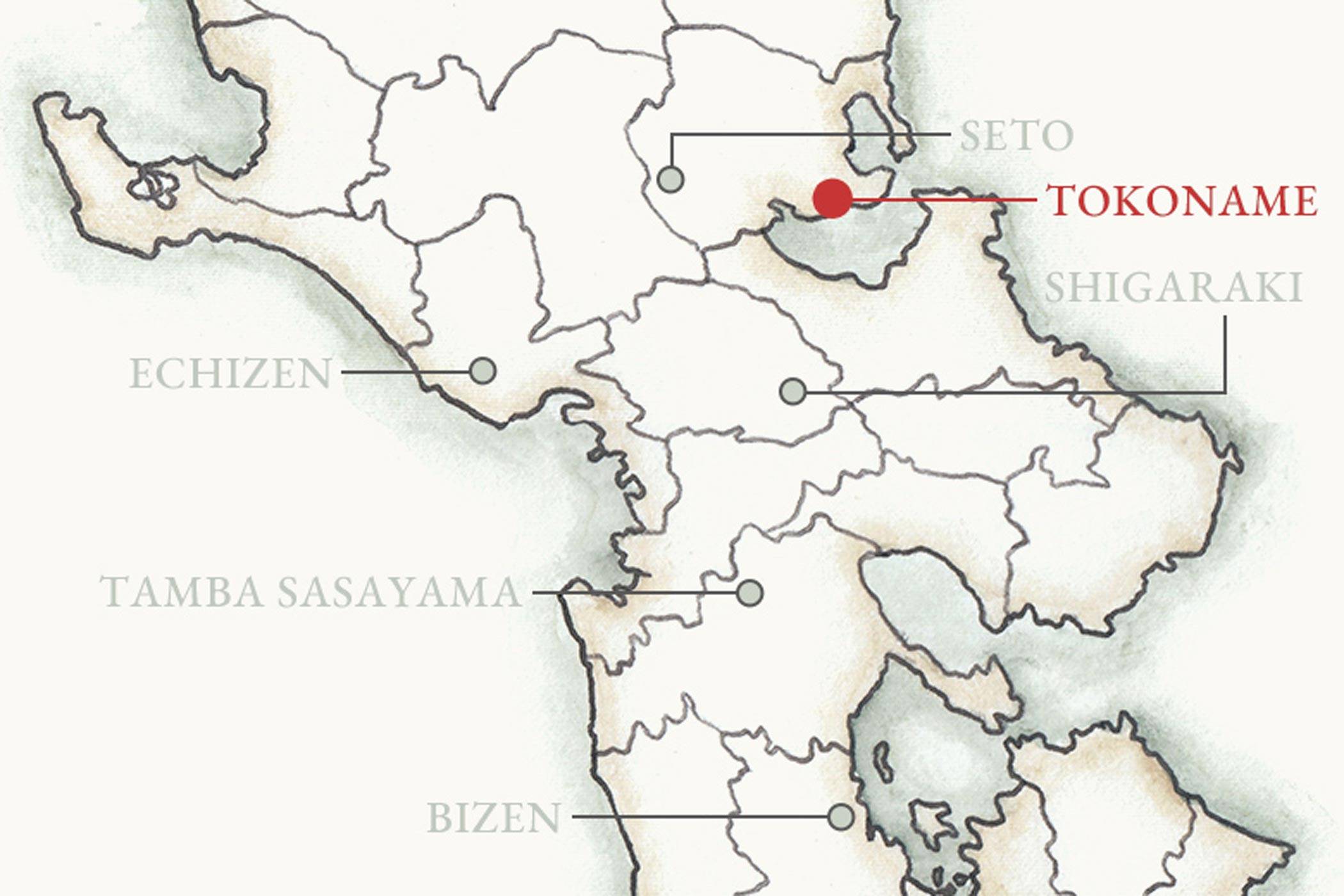 Tokoname-yaki, or Tokoname-ware, are the unique styles of ceramics from the Tokoname region, just south of Nagoya, which have a history dating back well over 1000 years. Today the area is famous for their kyusu teapots, which is the classic shape of teapot used for Japanese tea.

Already by the end of the Heian period (794-1185), Tokoname had the largest pottery production among the Six Ancient Kilns of Japan, the five others being Bizen, Echizen, Seto, Shigaraki, and Tamba. The region owned approximately 3,000 ascending kilns, called anagama, that were formed by digging holes in the hillside. Some of those ancient kilns remain visible today. 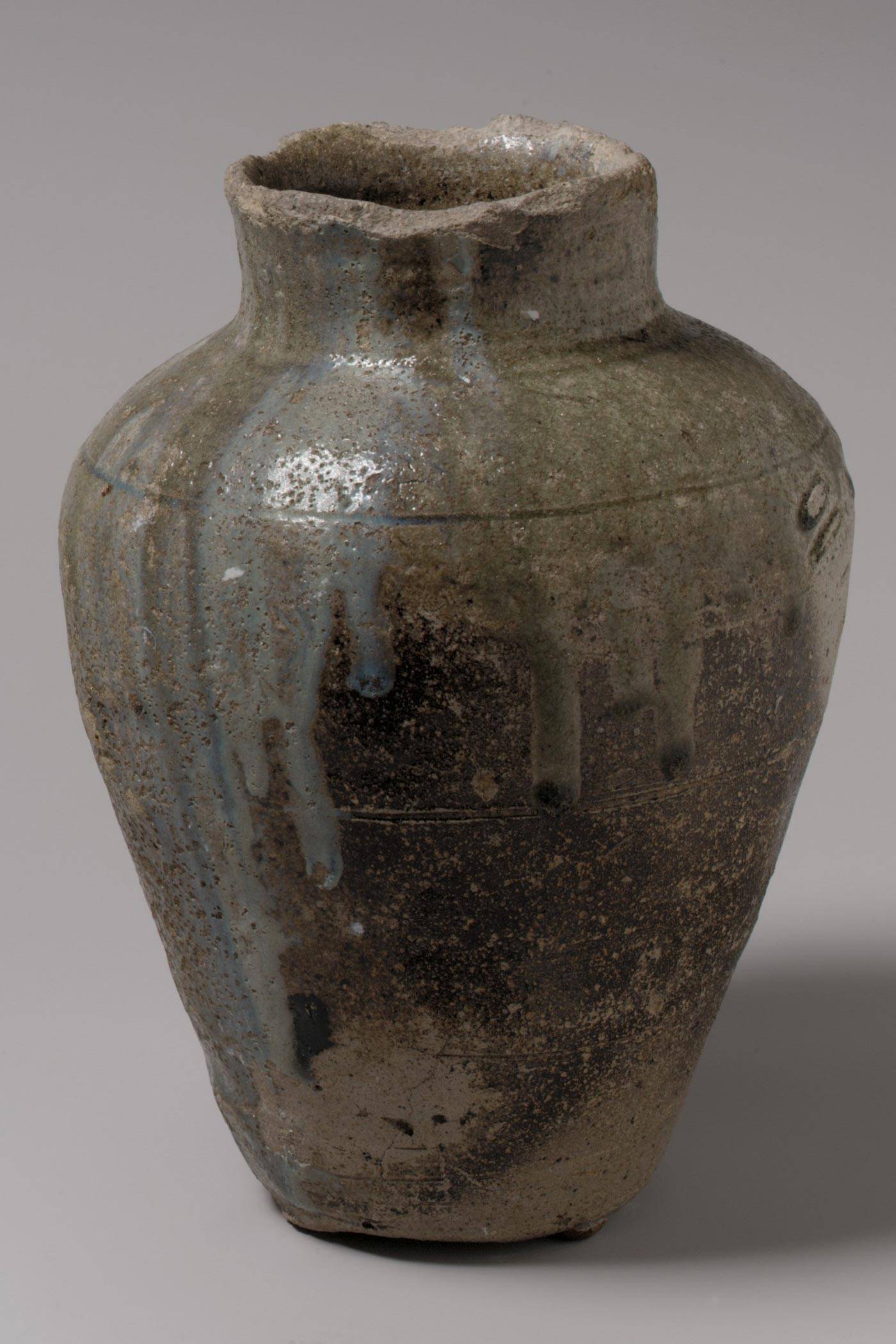 To learn more about kyusu, check out our guide to Choosing the Best Traditional Japanese Teapot.

During the Meiji period, when Japan’s railroads were being constructed, there was a Tokoname clay water pipes became especially sought-after for the accompanying waterway construction work. During the Taisho period (1912-1926), Tokoname ceramic tiles were highly needed. 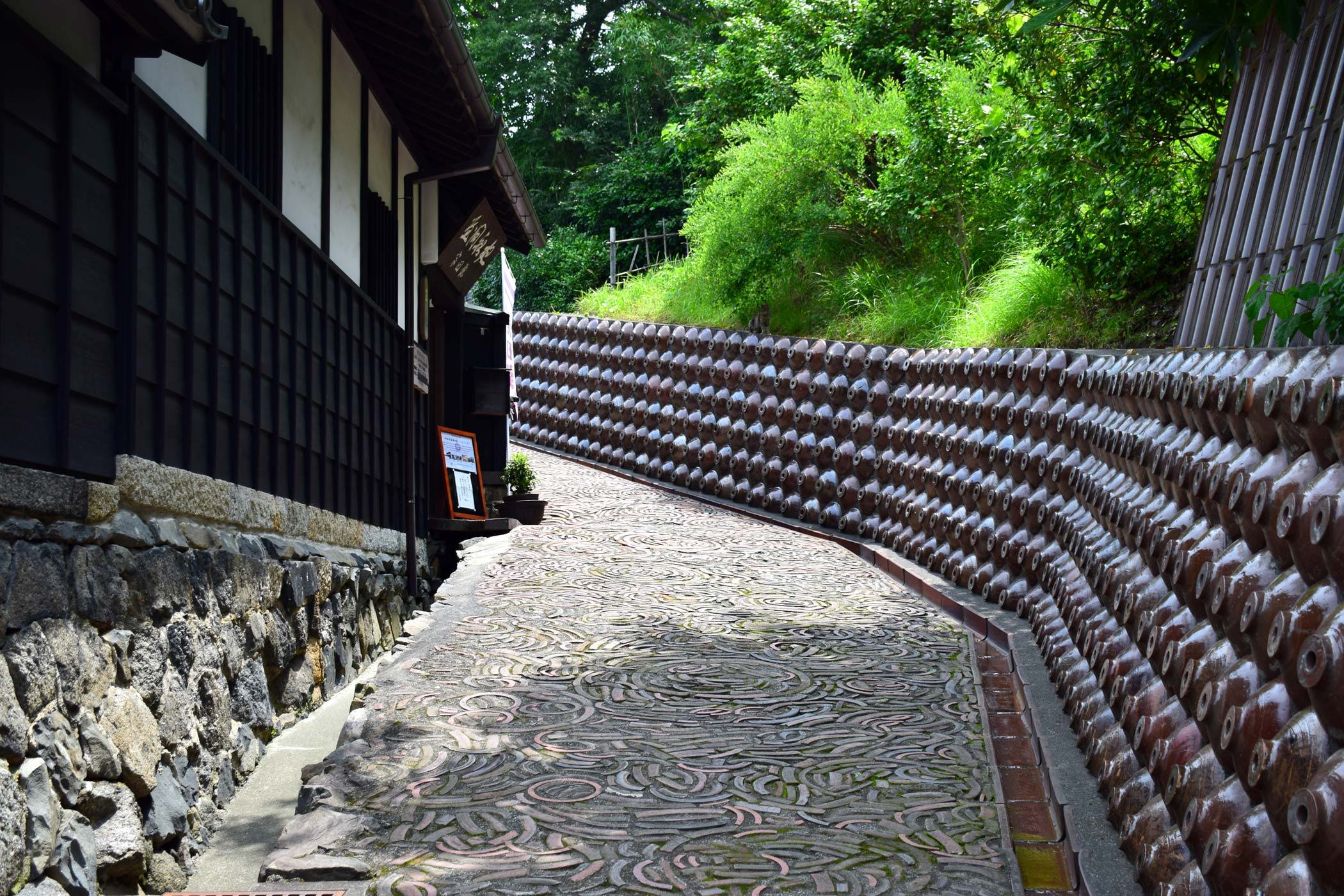 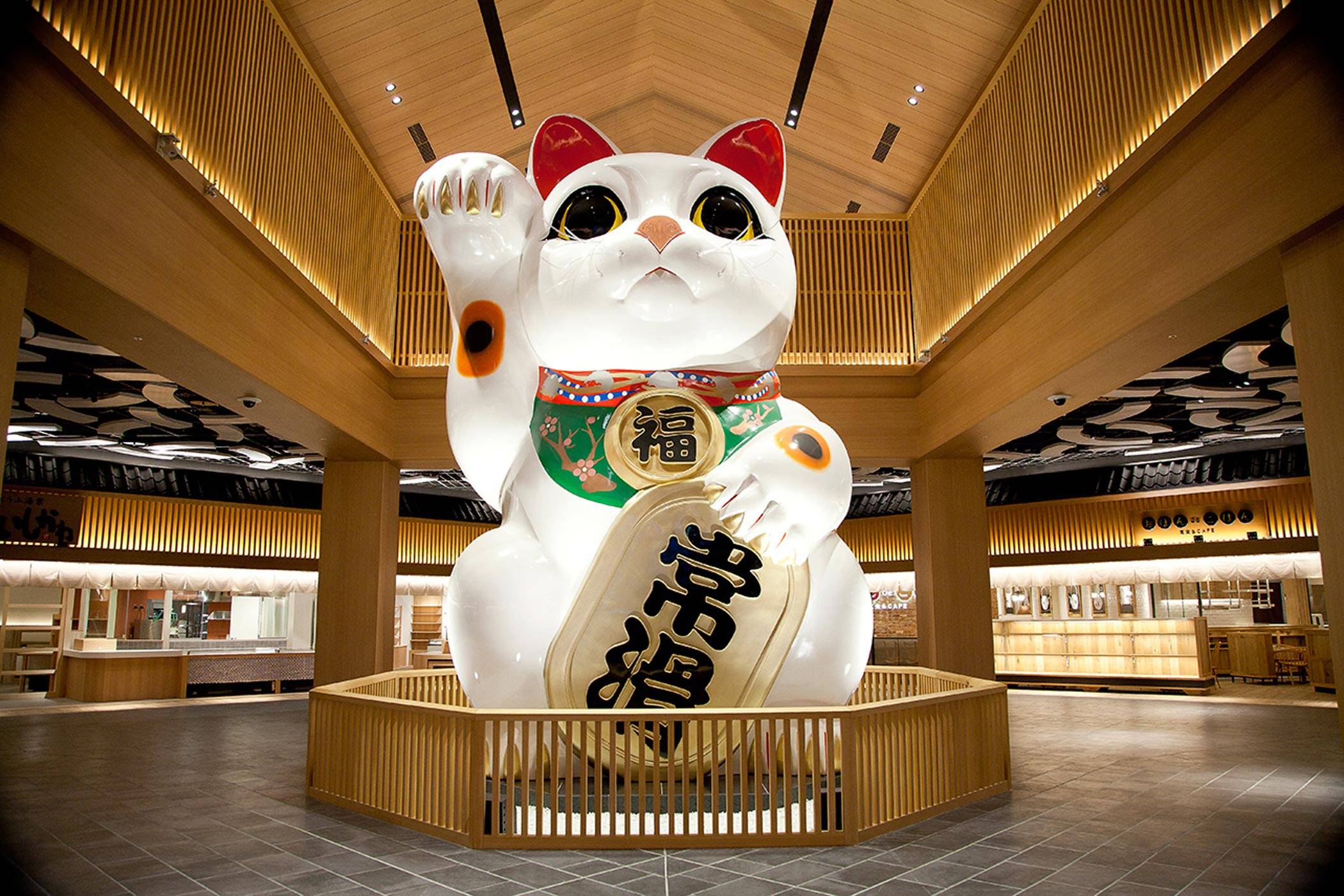 Did you know that the city of Tokoname was also famous for its production of maneki-neko (a cat figurine believed to bring good luck)? Tokoname’s maneki-neko street, one of the town’s famous photoshoot locations, contains circa 40 picturesque cat sculptures. If you want to know more about these auspicious felines, have a look at our article What are Maneki Neko?.

2. What is Unique About Tokoname Clay? 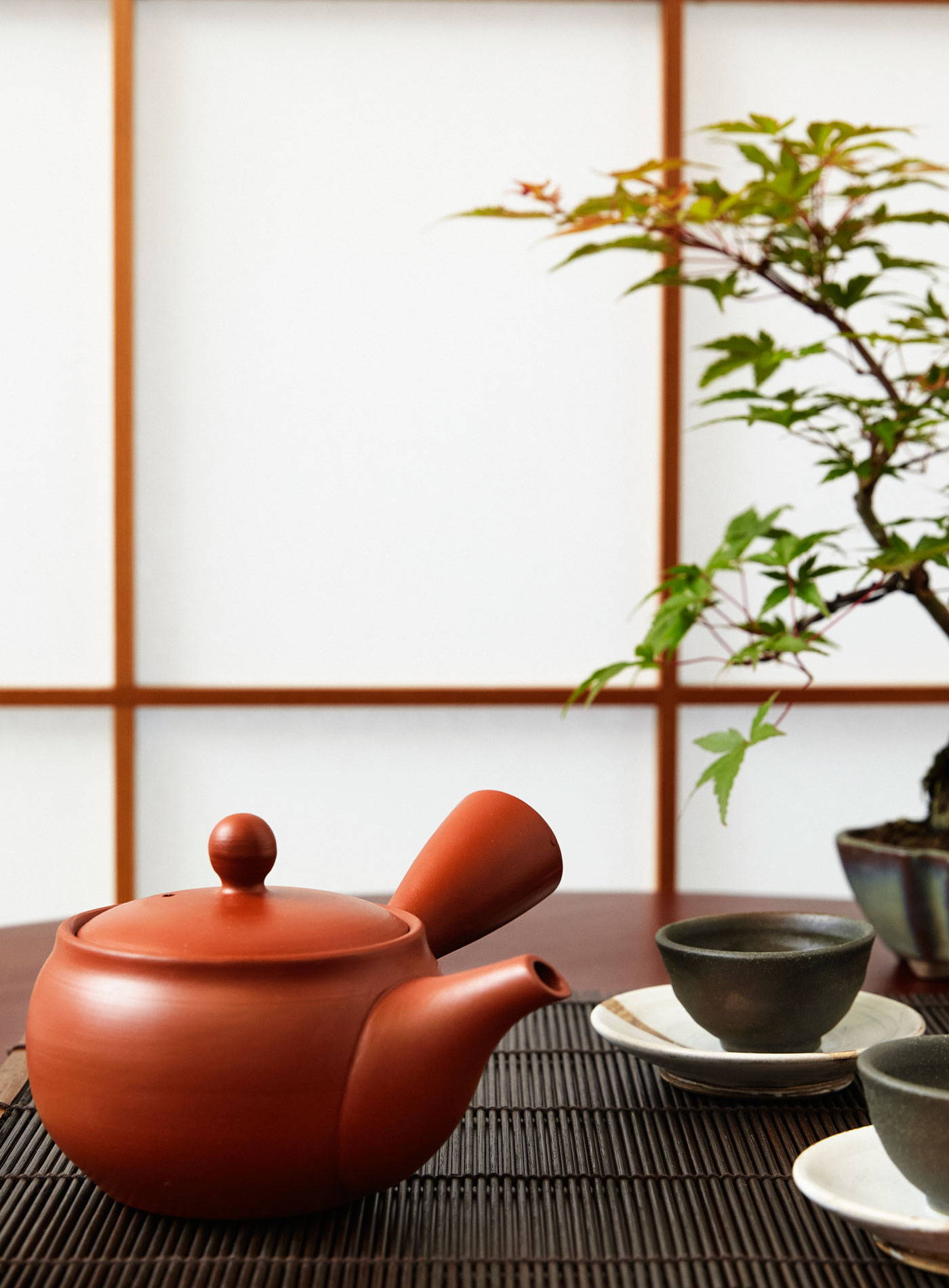 Collected in the Chita peninsula, Tokoname high-iron content clay turns reds after firing, in a process called shudei (unglazed reddish-brown pottery). Kyusu teapots by from Tokoname clay are highly esteemed by green tea enthusiasts, because of the taste that material imparts to the tea. It is often said that the iron contained in Tokoname clay softens the astringency and adds roundness to Japanese green tea.

The features of Tokoname clay have their roots in the geography of the area. Tokoname is located on the Japan Median Tectonic Line, which is responsible for the exceptional mineralization of the soils. For 5 million years, the Tokai Lake collected thick iron-rich sediment until eventually giving way to the sea.

Many of the area’s potters collect the clay themselves. Mountain clay, harvested from higher altitude areas tends to be sandy, resulting in a rough wabi-sabi finish. Clay from downstream areas, and around rice fields is generally denser, and produces a smoother finish. For this reason it is more commonly used for Tokoname’s famous teapots.

Tokoname clay is famous for its deep red color, which is achieved through a process known as oxidation firing, where the kiln if provided with plenty of oxygen. Conversely, reduction firing is when the kiln is deprived of oxygen, resulting in a dark charcoal-black hue. 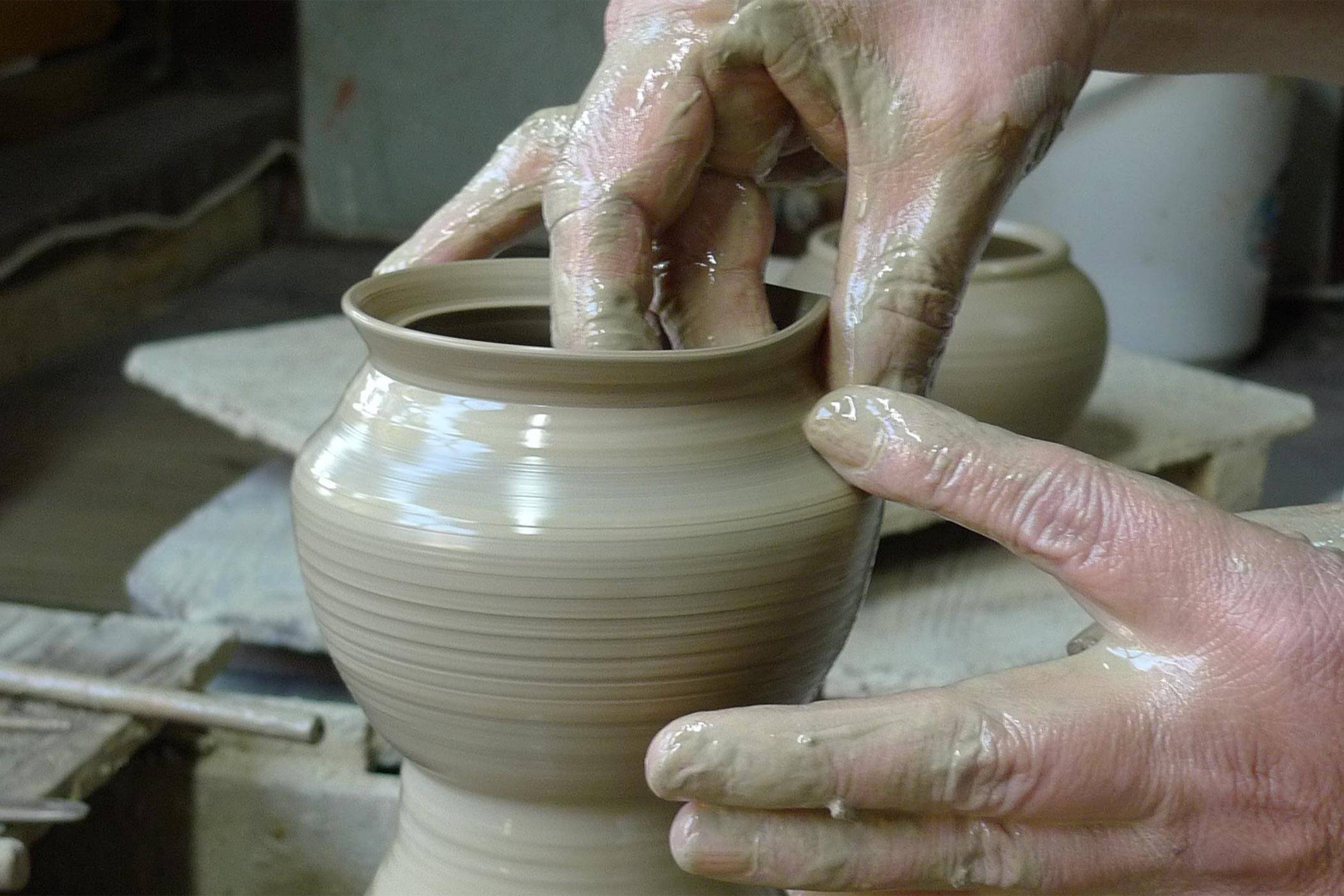 Tokoname pots, teapots, teacups, and tea ware in general, are lightweight, resistant, smooth, and particularly easy to use. Moreover, Tokoname teapots take on a patina over time: the tea brewed in these kyusu gains in quality. Each teapot is fired with its lid placed on. Consequently, the lids are extremely airtight.

Tokoname kyusu are often decorated by incising the clay with a cutting tool to make a continuous pattern (tree bark pattern, for example), by using colored clays or by a gradation in the clay.

3. How are Tokoname Teapots Made? 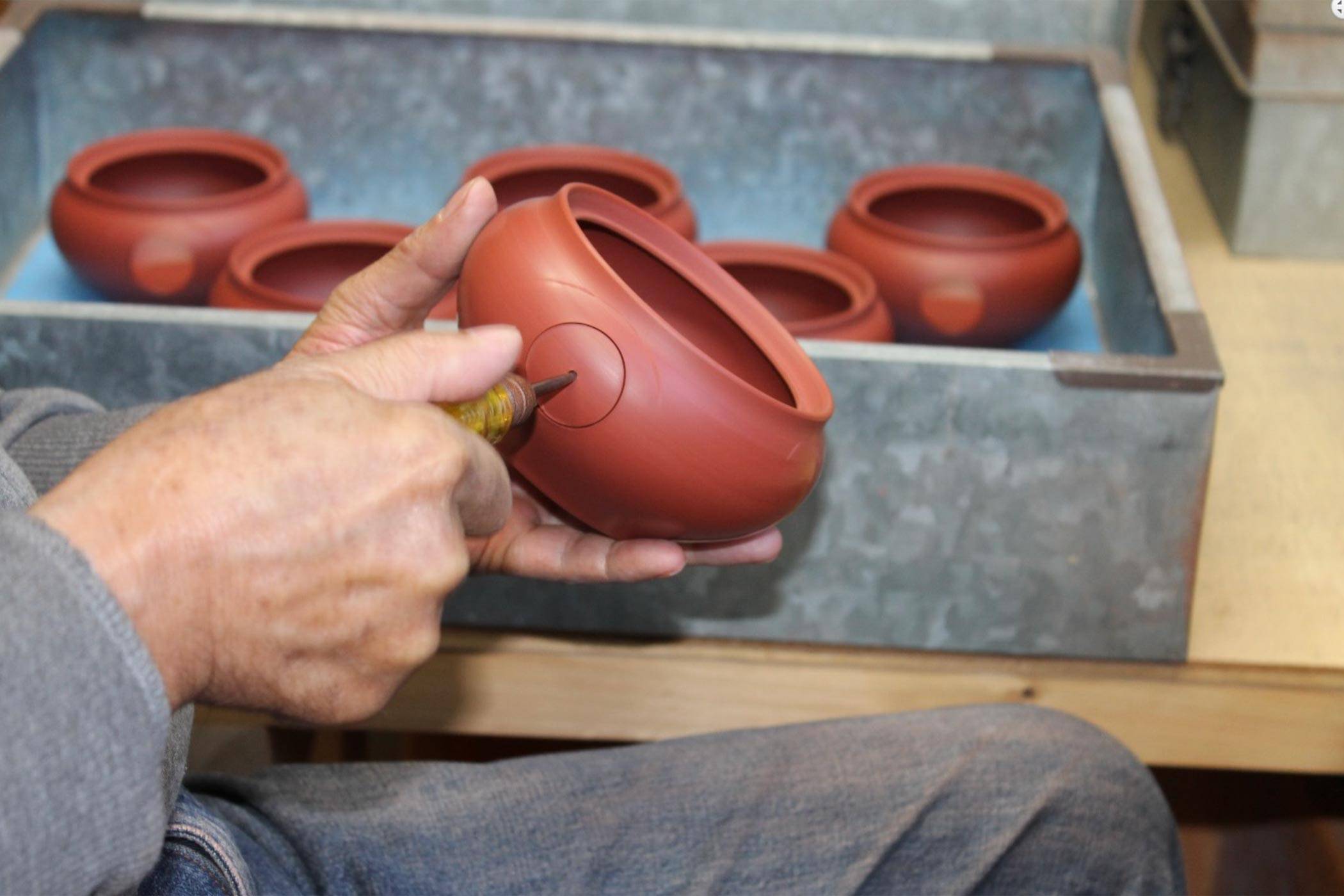 A Japanese ceramic teapot can be made in one of two ways: throwing on a potter’s wheel, or casting, known in Japanese as ikomi.

Kyusu teapots made on a potter’s wheel must be handcrafted one by one. Only the most experienced ceramicist is able to achieve the consistency and balance required to make the fine teaware that tokonameyaki is famed for. Each part – handle, spout, lid and filter - of the pot must be shaped separately and attached seamlessly before firing. 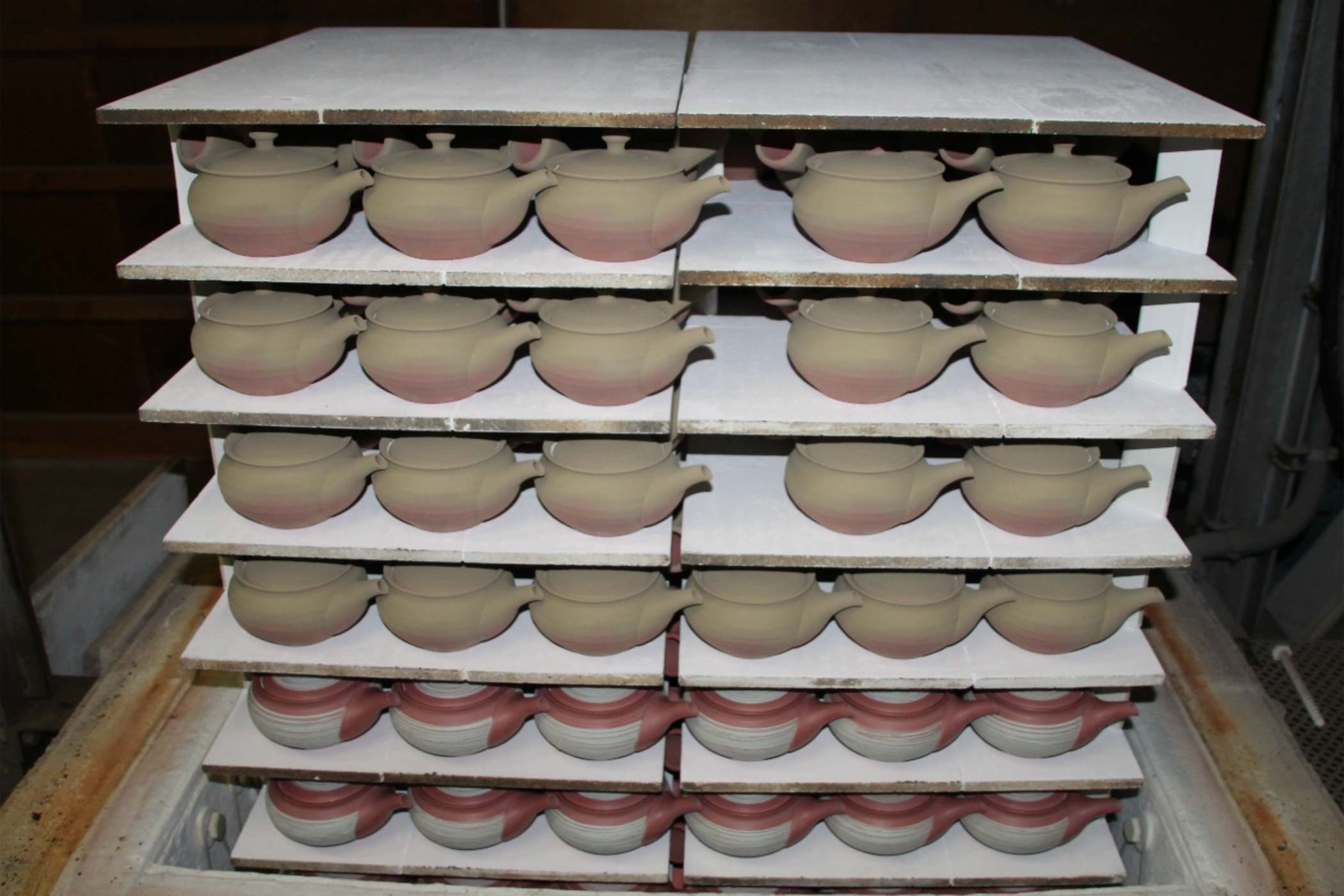 The ikomi technique makes use of plaster molds into which a wet clay mixture is poured. The molds are highly absorbent, so most of the water content seeps into the plaster, leaving the perfectly shaped teapots to dry before placing in the kiln. Using the casting method, tokoname potters are able to produce larger quantities of their highly sought-after pots, and satisfy the need for tea!

4. What is Special About Tokoname Teapots?

It takes a lifetime to perfect the skills necessary to handcrafted a perfectly balanced Japanese teapot. Tokoname’s long history of specialization in teaware have given the area’s artisans an edge over ceramicists in other parts of Japan.

One of the most important aspects of a good Japanese teapot is the filter. And one the reasons why tokoname teapots are so sought-after are the innovative and finely crafted filters. 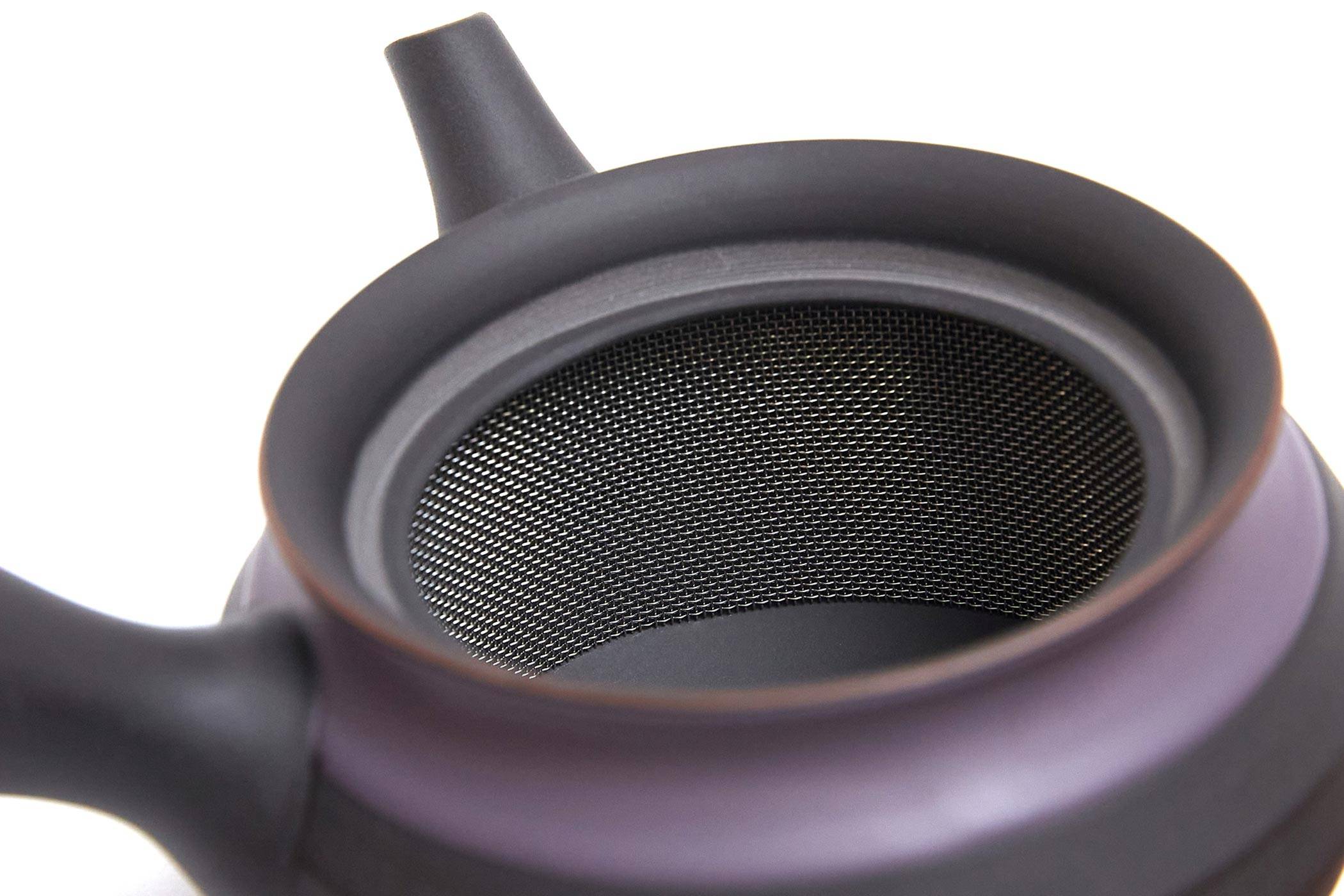 The obi chakoshi (belt strainer) was invented in Tokoname: a stainless-steel band circling the inner circumference of the kyusu. This design gives the tea leaves room to spread out in the hot water, developing the delicate taste and aroma of the tea. The liquid flow is smooth and not clogged by tea leaves when pouring. This fine mesh net is suggested for very fine tea leaves, such as deep-steamed tea (fukamushi sencha), but is suitable for any types of tea. Sencha (middle- to high-grade green tea) and kariganecha (high-grade stem tea) are especially recommended. 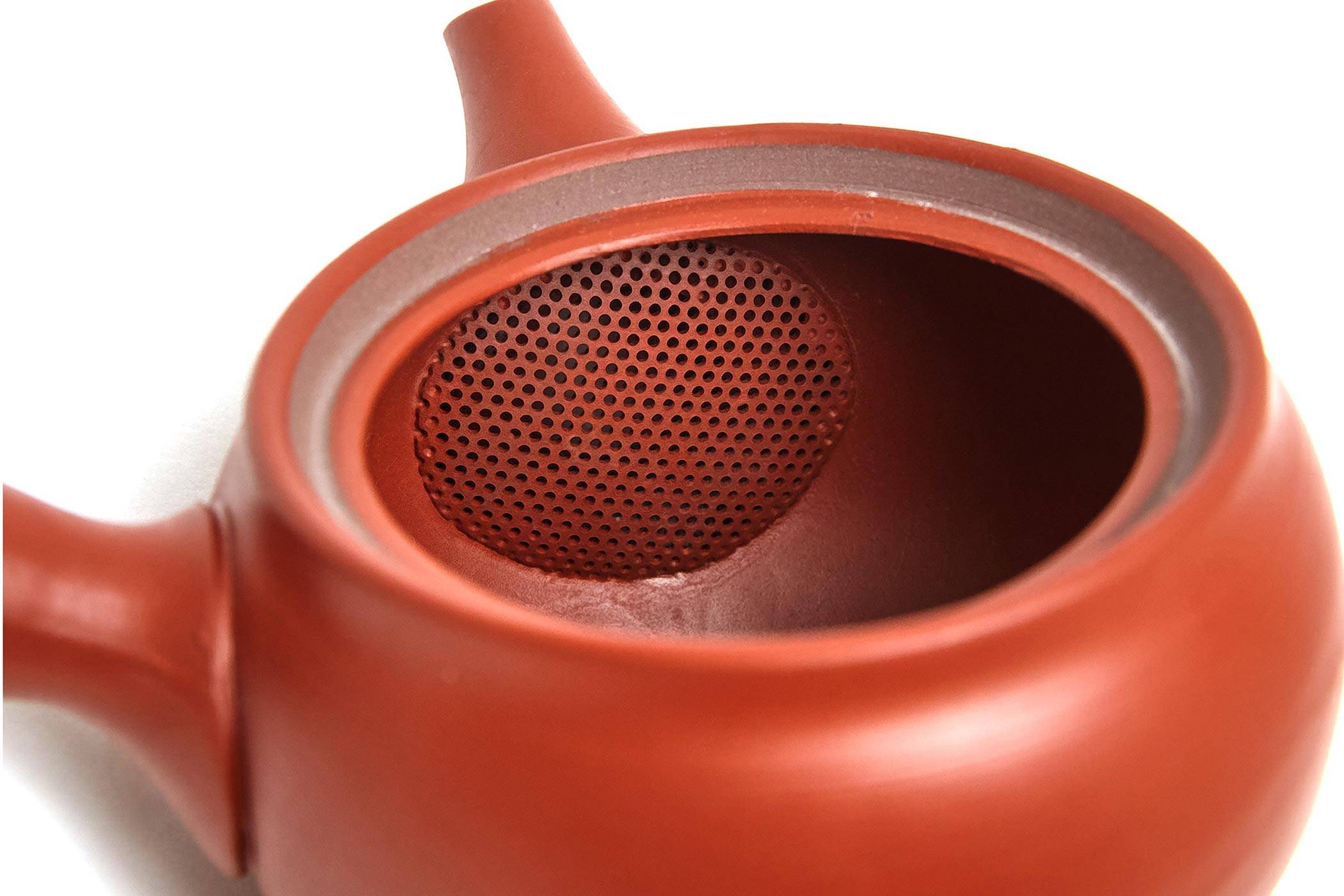 Another characteristic filter from Tokoname is the semi-handmade ceramic strainer, named sasame. Developed in Tokoname and made of clay, this filter has numerous tiny holes on its surface.

Firstly, discs are cut out from thin strips of Tokoname red clay. The mesh holes are then created using a special tool similar to a press machine. The filter is later manually formed into a concave shape and fixed inside the teapot before firing.

The sasame traditional strainer can also be used with very fine tea leaves, such as deep-steamed tea (fukamushi sencha) but must be carefully cleaned to avoid clogging. Another tip is to pour the liquid slowly, so that the tea leaves remain on the bottom part of the strainer.

This strainer works perfectly with larger or curled tea leaves, such as tamaryokucha, but it is convenient for any types of tea. We recommend it for sencha (middle- to high-grade green tea) and kariganecha (high-grade stem tea).

5. Which are the Best Kilns and Artisans in Tokoname?

We visited kilns throughout Tokoname to bring you the best pieces from the most skilled craftspeople. 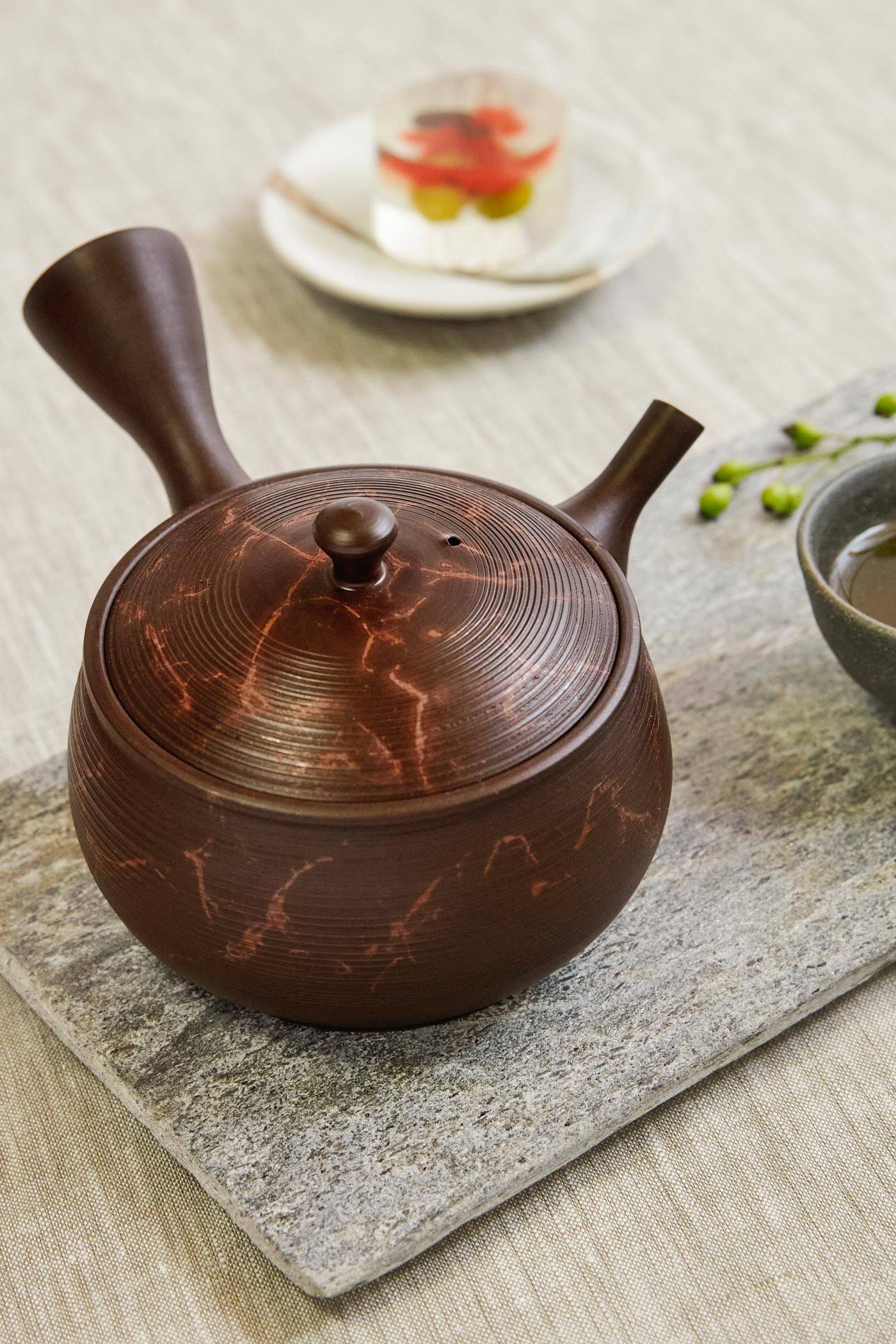 Master potter Gyoko received several awards at the Choza Ceramic Exhibition and at various national competitions. He knows the fire reduction like no other. His teapots are fired using the mogake technique, mo meaning seaweed, and gake signifying wrapping in Japanese. His works are wrapped with seaweed and then fired in the kiln. The salt enclosed in seaweed creates unique patterns on the clay, due to the chemical reaction. This technique is characteristic to the Tokoname region. 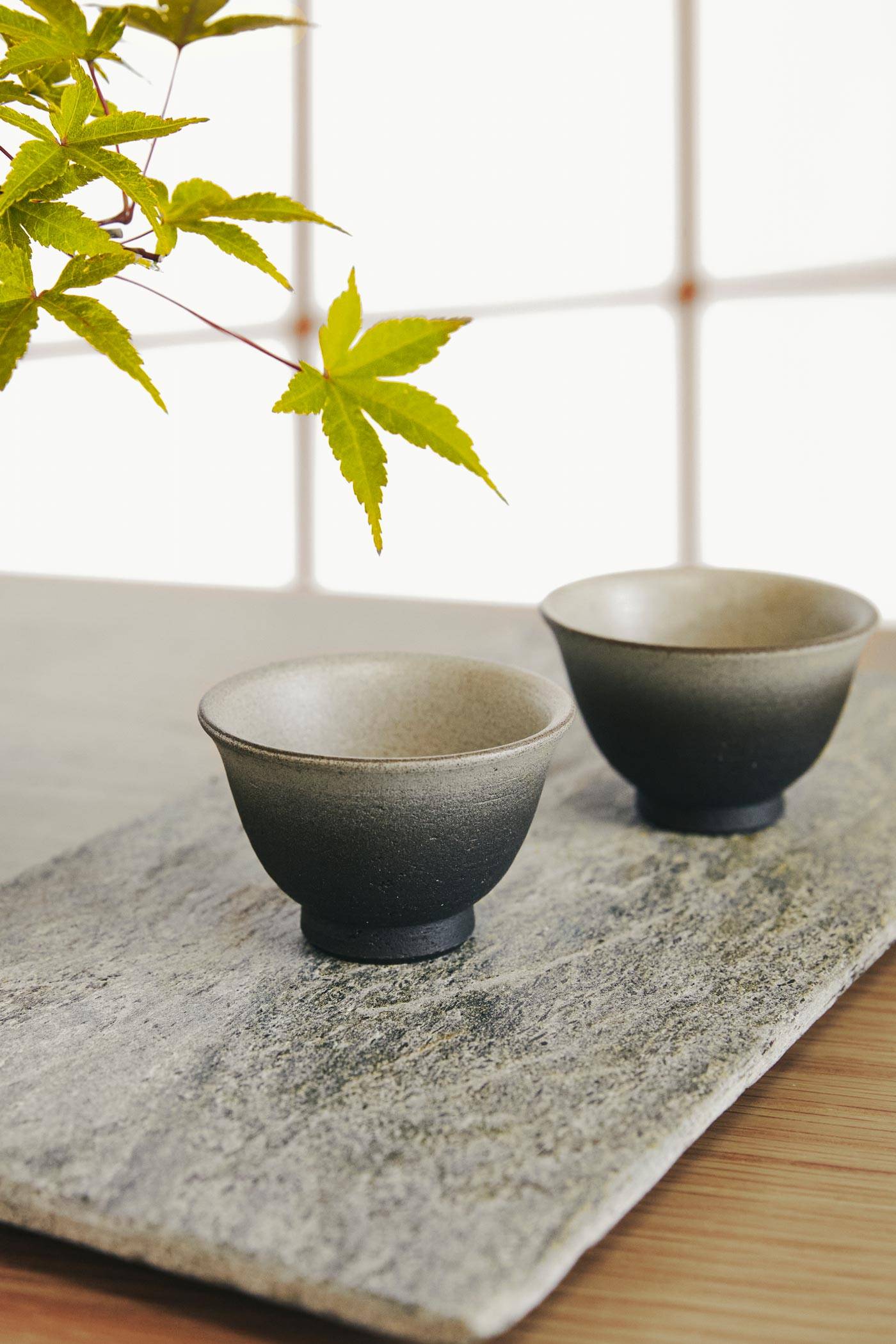 Born in 1976, Maekawa Junzo has also been awarded for his work at the Choza Ceramic Exhibition and at several national competitions. Junzo uses natural, iron-rich clay from Tokoname and makes his own clay mixtures by himself. Additionally, Junzo puts a lot of efforts in his teapots and teacups styles: their round shapes, almost architectural, are immediately distinguishable. 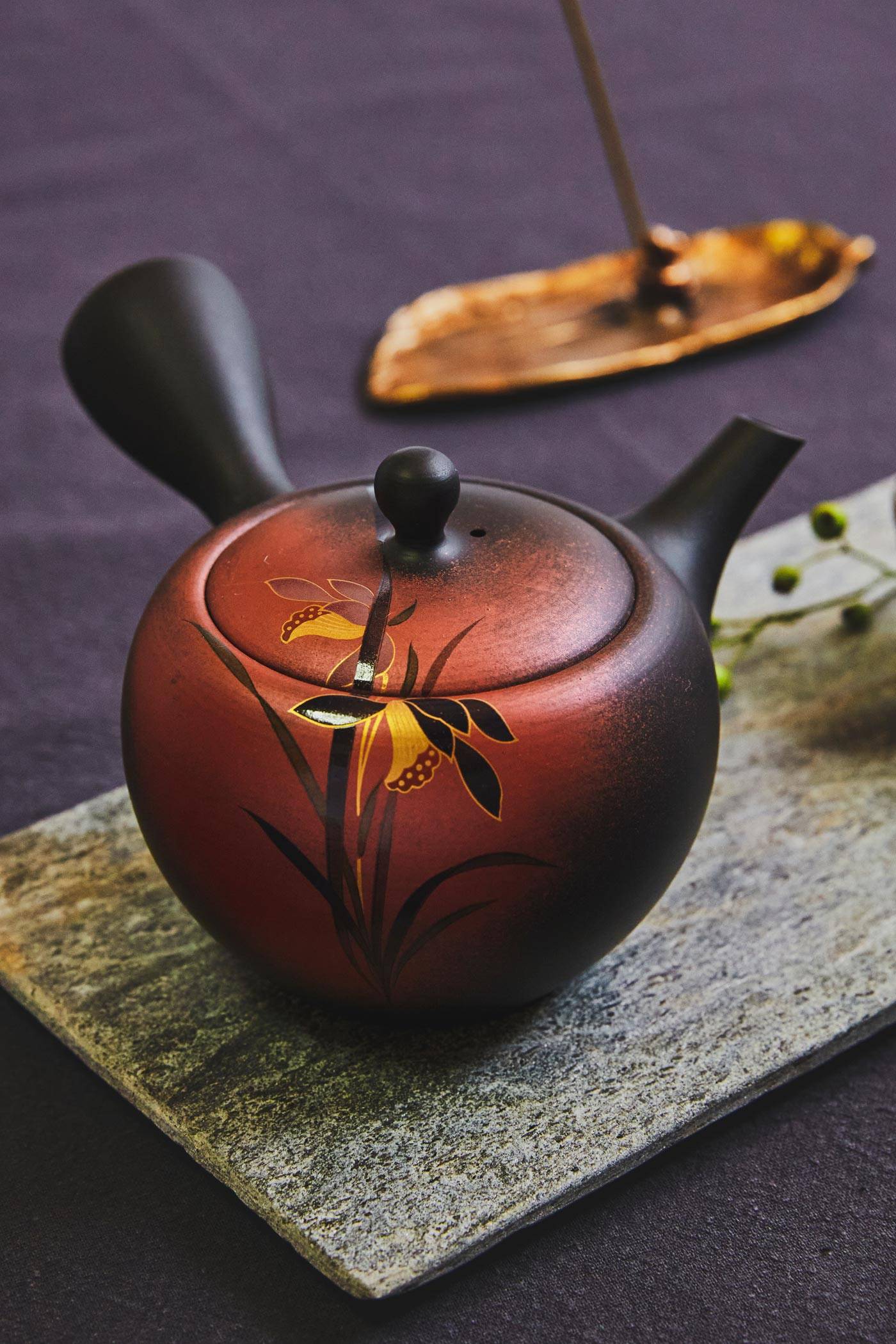 Also from the region, the famous Shoho Kiln received a Governor's Prize at the Hokkaido Ceramic Art Exhibition, and a Gold Prize at the World Tea Ware Contest. 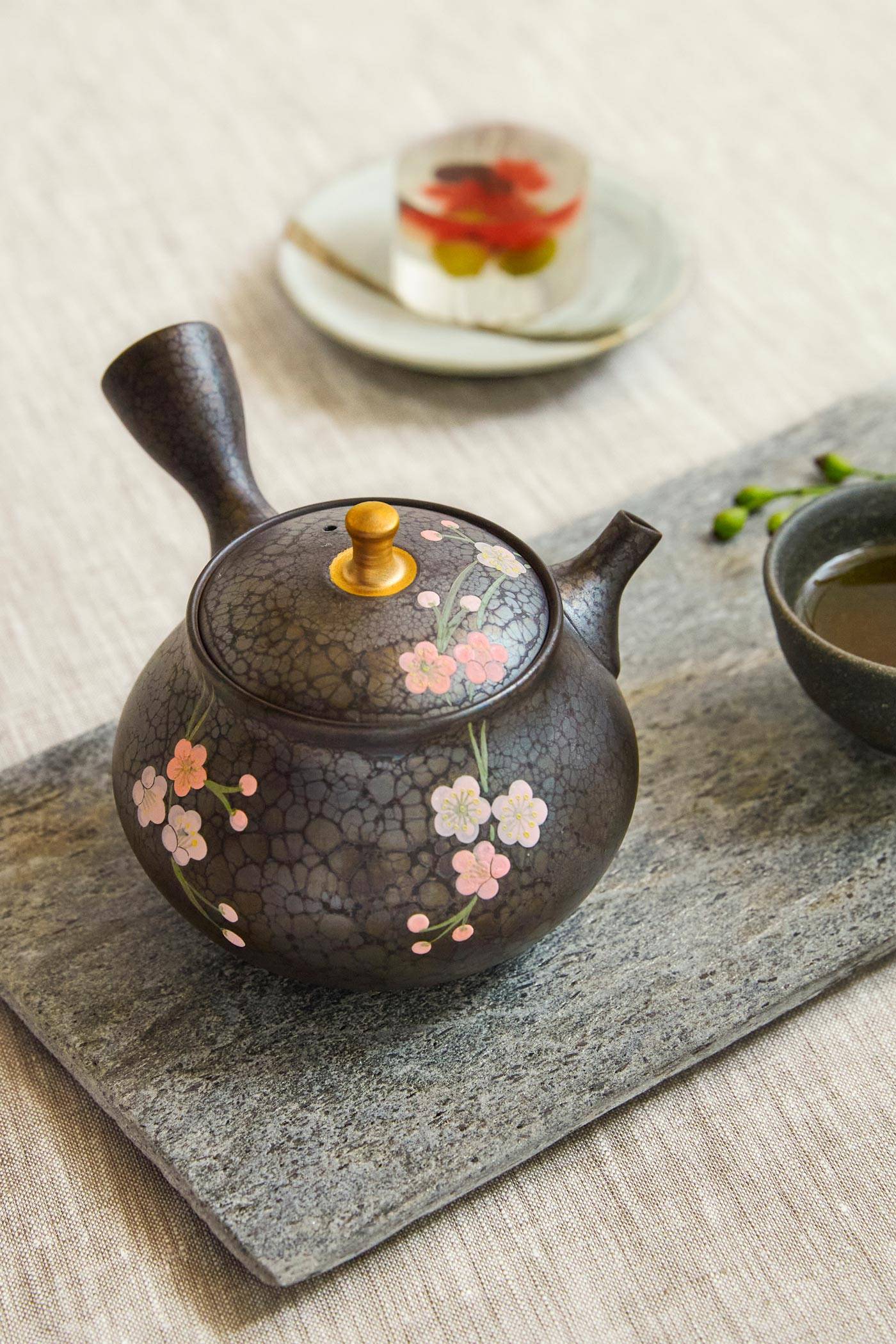 Born in 1945, master potter Shoryu has been manufacturing tea ware for more than 60 years. He even mixes his own clay. In 2018, he obtained from the government the Order of the Sacred Treasure, Silver Rays, for his remarkable contribution to Japan’s traditional crafts. 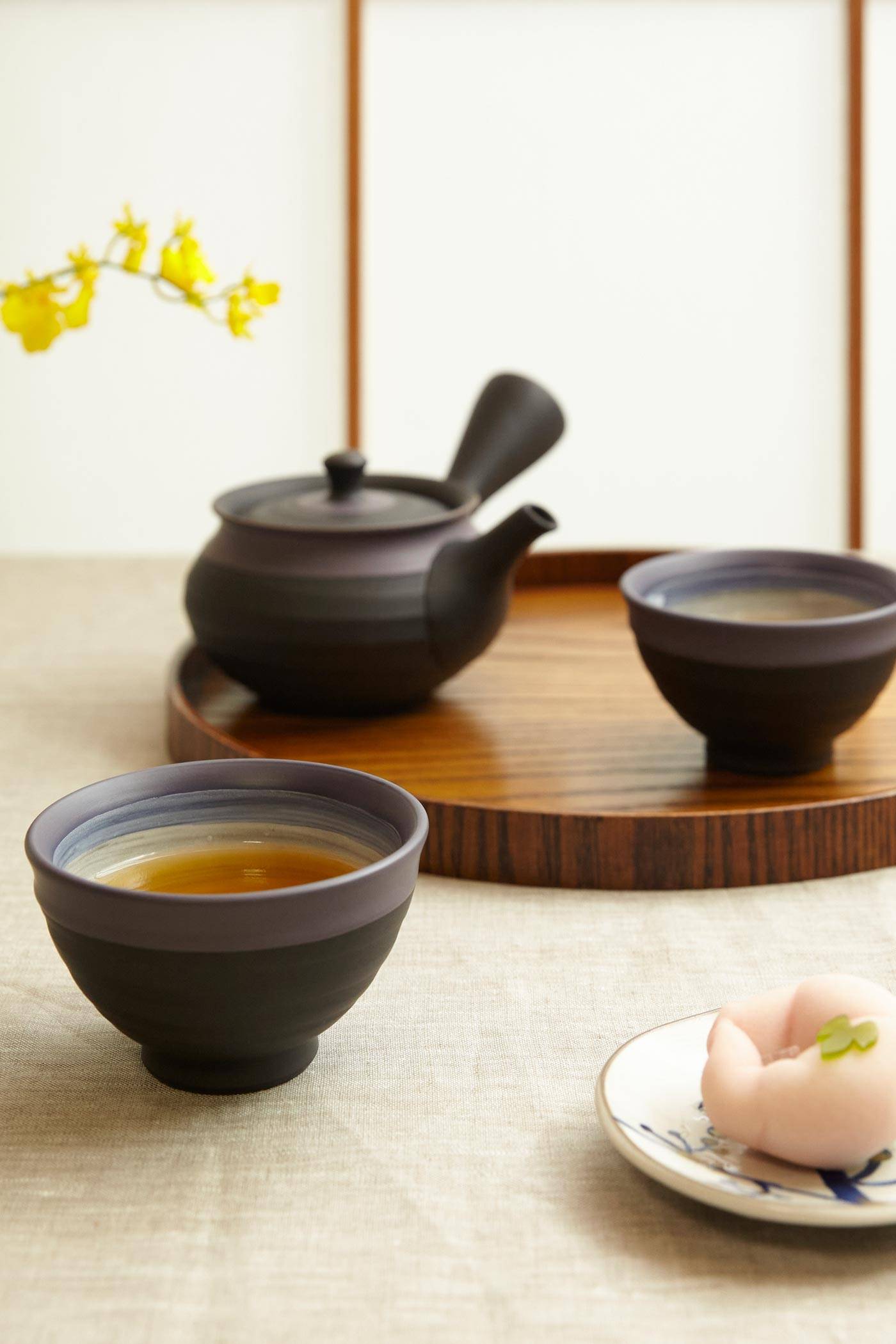 Ukou Kiln was founded and started manufacturing tea ware in 1972. Their obi chakoshi (belt strainer) was patented in 1987. In recent years, the company has obtained several honors at national competitions. 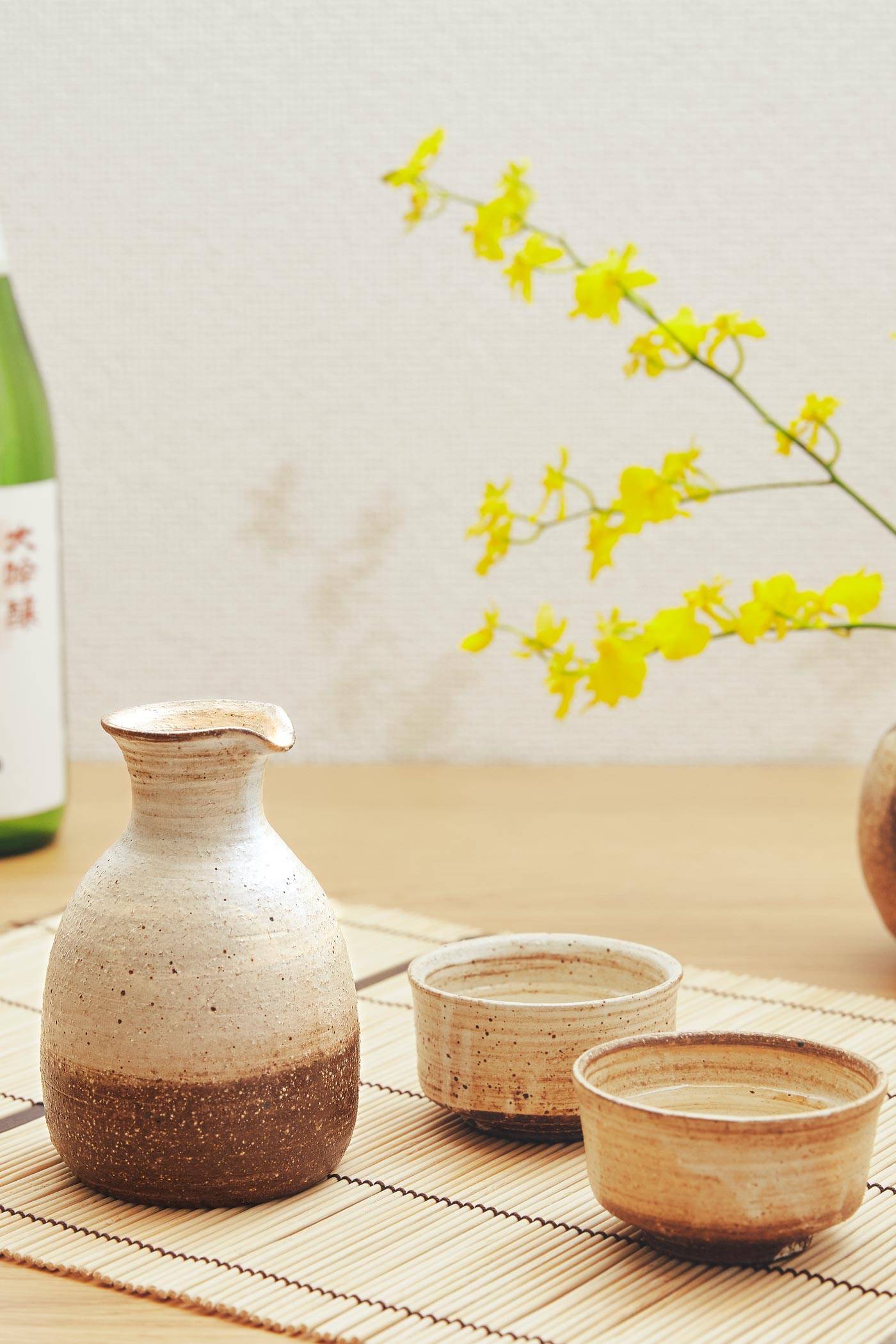 Last, but not least, Yamadatoen celebrated its 128th anniversary in 2022. The aim of the company is to create vessels with ancestral techniques. Every bowl by Yamadatoen is unique: its glaze reacts differently due to the fire intensity and its position in the kiln.

6. How to Take Care of Your Japanese Teapots? 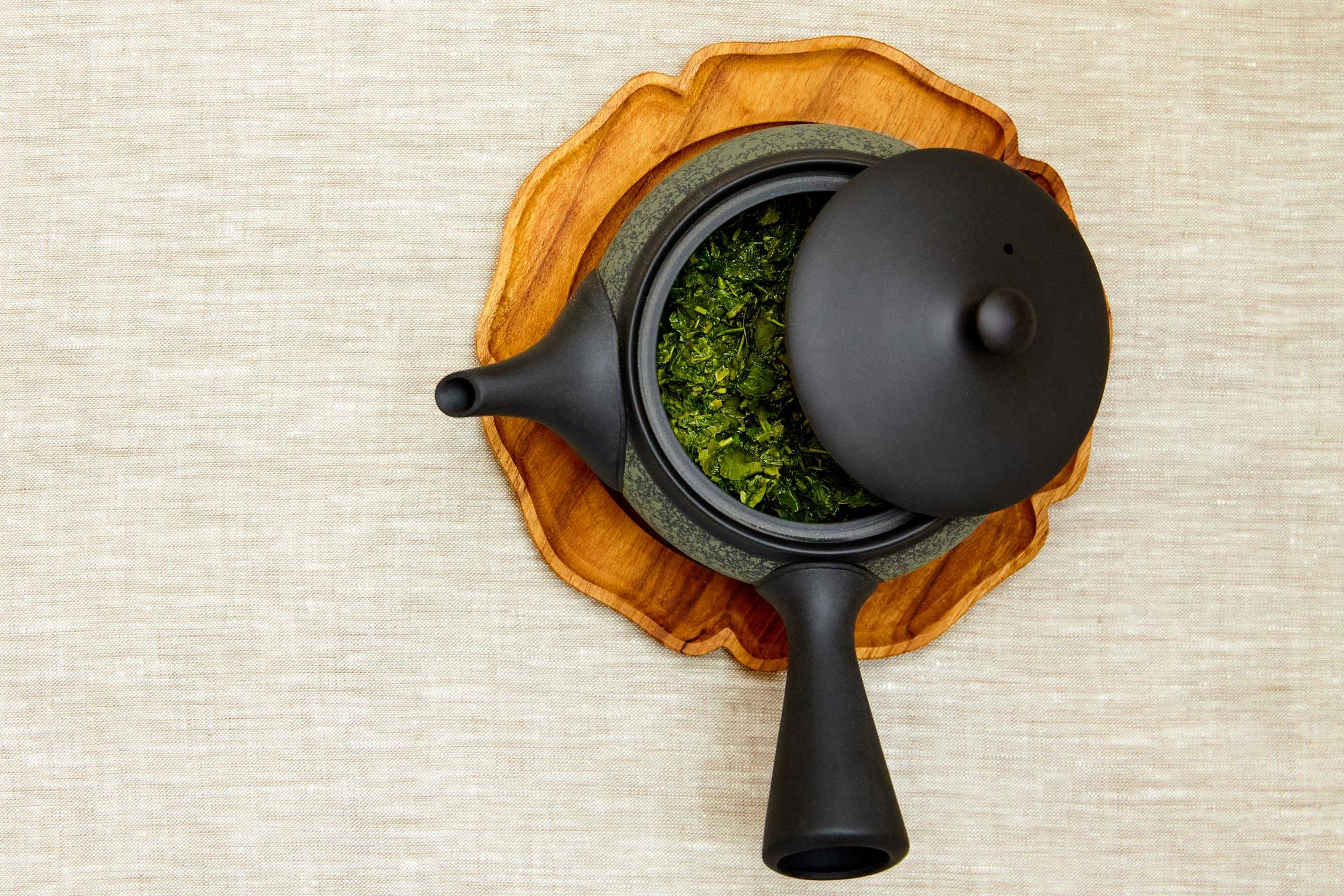 After use, teapots, tea cups, tea bowls and any Tokoname ware should be rinsed carefully with hot water, which will help them to dry faster. Make sure the pot is completely dry before putting it away in a well-ventilated area, paying particular attention to the inside of the spout, where water can linger for a long time!

Ceramic can absorb smells and flavors, so for best results use one teapot for similar styles of tea.

Do not place your teapot directly on hot surfaces, or use in microwave or dishwashers.

7. Where to Buy Tokoname Teaware? 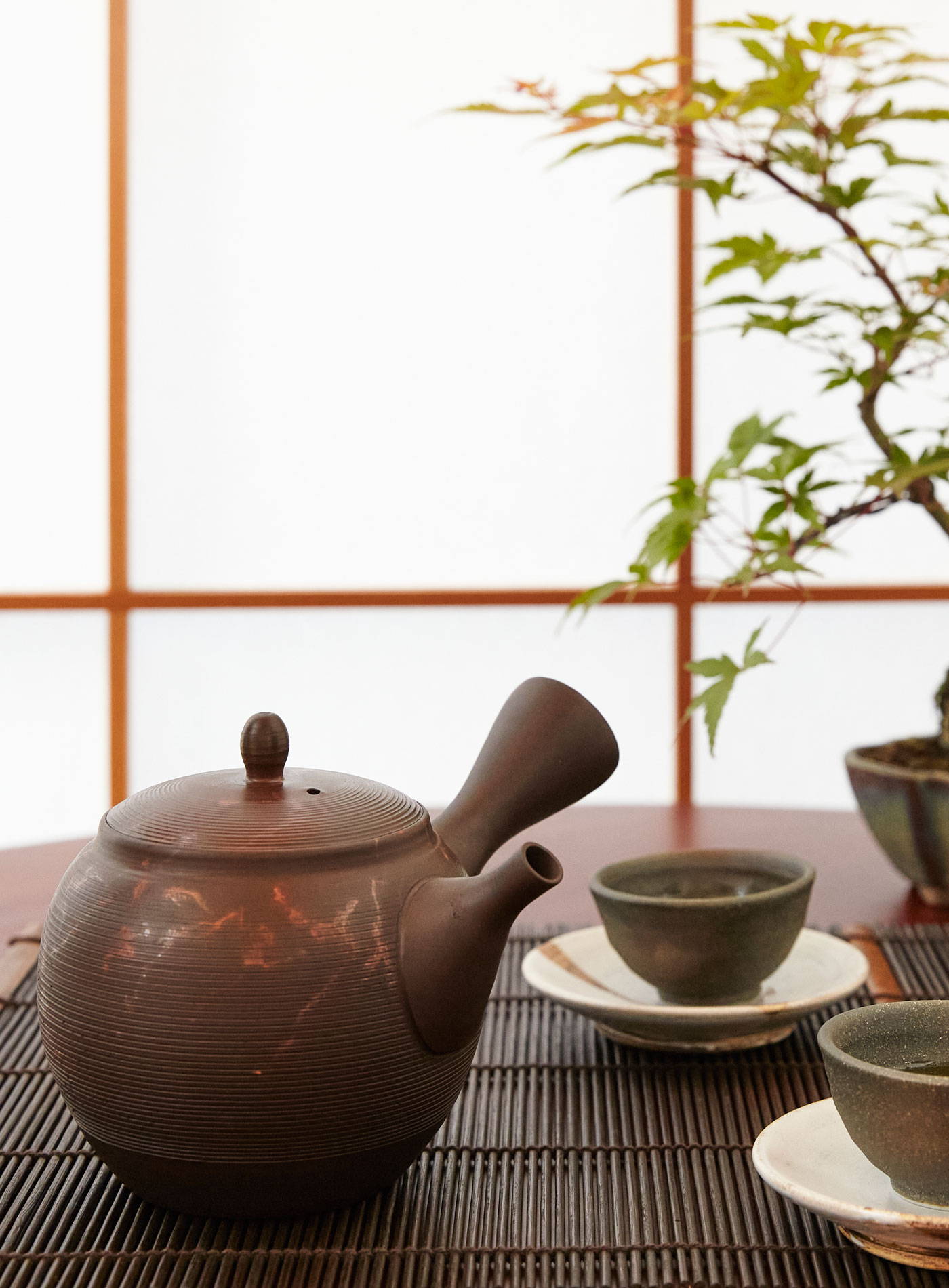 If you are looking for a simple kyusu for daily life, you will find various ceramics boutiques strolling around Kyoto’s touristic areas and Asakusa neighborhood in Tokyo. Our advice is to double-check the labels and provenance, as some (unexpensive) kyusu are made in China or Vietnam.

However, if you cannot travel to Japan, we’ve got you covered! At Japan Objects Store, we’ve partnered with some of the finest artisans and kilns from Tokoname to bring handcrafted teapot sets, teapots, teacups, matcha bowls and sake sets directly to your own home. Safely protected and neatly wrapped, enjoy the pleasure of Tokoname high quality ceramics anywhere in the world!